These are just some of the protest slogans from Sarah Goffman’s large-scale installation I Am With You, currently on view at Australian Centre for Contemporary Art (ACCA) in the exhibition Unfinished Business: Perspectives on Art and Feminism. Inspired by real slogans used by protesters in the 2017 Women’s March, Goffman’s work turns political action into an aesthetic archive, and sets a powerful tone for the rest of the show.

This conflation between art and politics is nothing new. After all, art is created and consumed within a context of cultural, historical and economic paradigms that are ever-shifting. To think that art can change the world is simple naivety, but to deny the power that art has to instigate and empower critique is purely cynical. The truth and power of art lies somewhere between speculative idealisation and political praxis.

Unfinished Business is the second show so far in ACCA’s new series of ‘Big Picture’ exhibitions ‘focusing on contemporary art’s relationship to wider social, cultural and political contexts.’[i] It follows on from last year’s offering Sovereignty, a much-lauded exhibition of First Nation artists exploring ideas of identity and resistance. Like this predecessor, Unfinished Business is an ambitious curatorial offering led by a team of curators that attempts to tackle issues of representation and visibility within the art world and beyond.

The context of an Australian-focused feminist survey exhibition is timely and overdue. The gender imbalance within the Australian art world has long been acknowledged, and charted by platforms such as the Countess Report by Elvis Richardson, one of the curators of the exhibition.[ii] The staging of Unfinished Business is also timely given the recent viral social media campaigns #MeToo and #TimesUp against widespread sexual harassment and violence in the entertainment industry and beyond. If there is a time of reckoning and social agitation on a large scale, it appears to be now.

One of the major strengths of Unfinished Business is its ambition, breadth and expansive vision. Taking over the entirety of ACCA’s gallery spaces, every nook of the foyer space and even the doorway, the exhibition situates key historical works and artists alongside contemporary peers with a particular focus on intersectional practices. One may be optimistic that this is the result of a delineated curatorial model, which allows for not a single voice to dominate but instead focuses on a more ‘curate by democracy’ model. The exhibition also makes an effort to include a diversity of practices, identities and artistic mediums.

What is immediately striking about Unfinished Business is that it does not attempt to offer a neat or straightforward reading of feminist discourse. While aesthetic and conceptual links can be drawn between particular works, such as the representation of the female body in Sophie Takach’s bronze cast of her vagina to Hannah Raisin’s video work Fold that suggests female genitalia through the use of visual metaphor, the exhibition does not merely rely on these readings. The feminist rage of Ruth O’Leary’s hand-painted Fuck Dresses is situated directly opposite the quietly evocative cyanotypes by Spence Messih. Where O’Leary’s rage is clear, Messih’s works offers a much more subtle rumination on what it means to occupy a body through the careful depiction of a bruised body. Unfinished Business is refreshing in its lack of didactic tone – it doesn’t tell you what to think, it invites you to reflect.

This strength of Unfinished Business is also ultimately its setback. As an exhibition that aims for an inclusivity and diversity, the sheer number of artists included in the exhibition means that at times works compete for attention. It is easy to miss key works, such as Kate Just’s neon text Furious, which is installed high on the wall out of eye line. This is not necessarily a negative, as in the case of Just’s work it adds a dimension of omnipotence, but it does have the potential to affect readings of other works. Furthermore, the presentation of video work is also problematic at times. Having previously viewed Hannah Bronte’s powerful Umma’s tongue as large-scale video projection, its presentation in Unfinished Business, alongside four other equally significant video works on small LCD screens, seems to limit the work’s impact and furore. 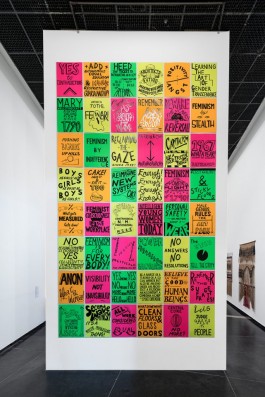 Despite this, Unfinished Business is an exhibition that rewards a viewer through multiple viewings. Given the exhibition’s maximalist approach and focus on multiplicity rather than a single narrative of feminism, the curators should be applauded for the way they have attempted to bring together an exhibition united by a lack of singularity. It may be easy to argue for a point of view, it is harder to offer a nuanced and multi-faceted perspective that at times contradicts itself. As Jessa Crispin recently writes in her ferocious book Why I Am Not a Feminist, “if feminism is universal, if it is something that all women and men can ‘get on board with, then it is not for me.”[iii] The very issue of making feminism ‘universal’ leads to its subjugation and makes it wholly ineffective.

The difficulty in critically accessing an exhibition like Unfinished Business lies in the reading of both its political prowess as well as its aesthetic and conceptual underpinnings. I am sure that many feminist-identifying artists share the sentiment that once their work is co-opted by a feminist framework, the value judgements on their work is inevitably coloured by this ideology. To curate through a spectrum of identity politics is to delineate a certain political position ahead of artistic independence.

It is laudable for ACCA to be staging an exhibition like Unfinished Business, to both acknowledge the historical precedents of feminist practice in Australia while also offering a nuanced perspective of contemporary discourses. As the title suggests, however, the work here is not complete with this exhibition. An annual  ‘Big Picture’ show is not enough to re-dress the institutional biases of our sector; instead, the diverse representation of intersectional perspectives needs to be considered across all levels of the arts community.

[iii] Jessa Crispin, ‘Introduction’. Why I Am Not a Feminist: A Feminist Manifesto, Black Inc, 2017, p. xii