For centuries, dead white men have found fascination in the notion of ‘will’. Their words still resonate from deep within their tombs in the pantheon of Western philosophy, where art theory calls upon their sulky spirits to deal with the contemporary. The TarraWarra Biennial From Will to Form curated by Emily Cormack conjures some of these weighty phantoms to explore how will interacts with objects. We may briefly define will as the ability to choose one path of desire among many and as a universal essence—Nietzsche, for instance, believed power motivates will.[i] Taking this concept as her point of departure, Cormack has brought together pieces that allow will to flow or “pass” into form; describing the works in the exhibition as “originating in or being affected by 5 distinct forces, or fields”, which she refers to as body, land/matter, psyche, itself and states of release.[ii] Works with sonic elements appeared to exemplify Cormack’s energy flows most closely, as their soundness caused a cacophony of immaterial energies that filled the hollow architecture of the TarraWarra Museum; agitating the space lightly like a coffin holding the undead body of Deleuze.

The idea of a chaotic will turning into form reminded me of the German philosopher Philip Mainländer and his pessimistic account of creation. Prior to Nietzsche, Mainländer envisioned will as the means to God’s suicide in 1876 with the publication of The Philosophy of Redemption. In this abysmal treatise, God committed suicide and exploded into infinite fragments to form the universe (like a performance artist with an AusCo grant) and reach a state of ‘non-being’. Mainländer—who is outrageously ethnocentric, Judeo-Christian and patriarchal— contends that humans carry God’s suicidality with a will to nothingness that drives ‘us’ and ‘our’ surroundings towards self-annihilation. He is relevant to what follows because he offers a stark contrast to many of the works in the exhibition; which put forth a generative understanding of will that emphasizes permanence rather than impermanence. The audiovisual works by First Nations artists excelled in this regard, as they embody forms of knowledge that bypass the mausoleum of sad Europeans that informs art theory.

Ode by Trawlwoolway artist Julie Gough unpacks one shoe unearthed during a residency at Skullbone Plains in Tasmania. The work consists of one screen and a vitrine displaying this macabre object, found in a former Aboriginal hunting ground. The video shows the Skullbone Plains area and contains a dialogue speculating on the origin of the item, which may have belonged to a young woman escaping her husband. The artefact sits next to the screen, where it emanates a macabre energy due to its marks of decay, and the implications of violence that leaving a single shoe behind entails. The somberness of this object becomes exacerbated by the video, which describes Skullbone Plains as feeling ‘wrong’ due to its nefarious past (cynically memorialized by its name). The interplay between the item and the video creates an act of postcolonial remembrance, framed by the artist as a ‘will to return’. This is a powerful concept in a country where issues regarding stolen land, unreturned artefacts and repressed histories stay unresolved. Ode shows how place and objects embody stories that surpass physical degradation, displaying a will to return despite the liquidating forces of colonialism and its systematic forgetfulness. 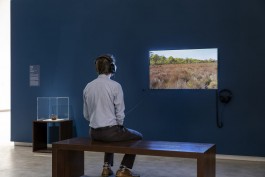 The interplay between the item and the video creates an act of postcolonial remembrance, framed by the artist as a ‘will to return’. This is a powerful concept in a country where issues regarding stolen land, unreturned artefacts and repressed histories stay unresolved. 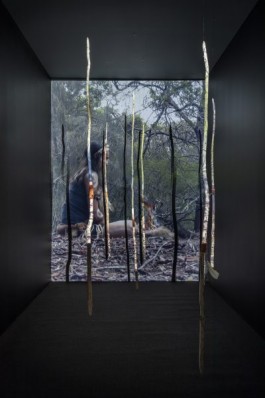 Next to Julie Gough, Koorokeeyarr—The Seven Sisters by Gunditjmara Keerray Woorroong woman Vicki Couzens recounts the sacred story of Koorokeeyarr (The Seven Sisters) or Pleiades star constellation through an audio narration, a video projection and 7 digging sticks. Firstly, one meets a set of headphones that tell the story of seven sisters who wanted to marry the same man to stay together. One crow wished to marry one but not all of them, so he turned into a grub—which the sisters tried to catch with wooden hooks. However, he caught one of the sisters instead by morphing back into a crow, taking her away into the sky; where they both became stars (the sisters followed them also, becoming part of the Pleiades constellation). The artist retells this poetic story in her Mother Tongue Keerray Woorroong followed by an English version. As one listens to the audio, a video with cosmic and ritualistic scenes alluding to Koorokeeyarr unfolds. These images are intervened by seven digging sticks suspended from the ceiling in the formation of the Koorokeeyar to manifest the will of the artist’s Ancestors and woman’s Law. Like Gough, Vicki Couzens points to the role of storytelling in the preservation of knowledge, particularly in the context of First Nations cultures, and asserts her drive towards reclamation.

In an adjacent corridor, we find the 30-metre wall drawing Wall compositions from memory by Bidjara, Ghungalu and Garingbal man Dale Harding and his cousin Jordan Upkett. Harding and Upkett mixed earth from the artist’s grandmother’s Garingbal country in the Carnarvon Gorge area with saliva. They blew and rubbed this mix onto the museum walls to imprint stories and song lines that acknowledge the Wurundjeri country in which the TarraWarra Museum is erected and celebrate stories from Bidjara and Garingbal country in Queensland. While Harding’s monumental drawing does not employ aural mediums like the preceding works, the song lines are encoded with a similar sonic energy. In fact, Wall compositions from memory continues to exemplify what Gough’s refers to as a ‘will to return’ by using breath, earth and saliva to manifest the will of the land. The artist appears to function as a medium in some regards, employing his vocal apparatus to fix First Nations’ speech onto the walls of the museum. Harding also works with the fleeting nature of the Biennial to make a poignant commentary on permanence: the will of the land precedes his arrival and it shall outlast his departure. In a similar way, the artist continues to carry these codes and forms of knowledge within the vessel that is his body.

Indeed, a valuable aspect of From Will to Form is that if offers the opportunity to see projects that surpass Western frameworks—such as those given by Mainländer or Nietzsche—to provide alternative accounts. 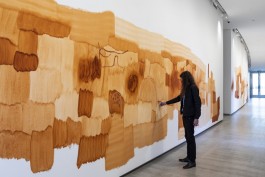 While there are other notable audiovisual works in the Biennial—such as Kusum Normoyle’s discordant sounding of Norway’s landscape in Magnesite Norway (2016-18)—they don’t override Western notions of will with the same gravity. Indeed, a valuable aspect of From Will to Form is that if offers the opportunity to see projects that surpass Western frameworks—such as those given by Mainländer or Nietzsche—to provide alternative accounts. This experience brings attention to the limited circulation of non-Western knowledgs in the tote-bag culture of the art world, where a legacy of neurotic Europeans and their ghostly words remains dominant. Thus, the opportunity to see audiovisual works by First Nations artists, among other non-Western pieces, interact with Cormack’s curatorial scaffold and proved an enthralling experience—as they ricochet the notion of will into a more ‘urgent’ (an exhausting buzzword I’m compelled to employ) territory. Without having read the catalogue essay, I left TarraWarra wishing for a more nuanced and extended approach (as well as a cheaper restaurant) to this encounter, since this struck me as the most vigorous and willful aspect of the exhibition.