TALKING ABOUT THE WEATHER:
An Interview with Angela Garrick

Esther Rolfe: Weather Vent explores the impact of the outside world on our sociological relationships and our psyche. What role do you think the natural world plays in shaping the ecology of a society?

Angela Garrick: Weather Vent can be interpreted as primarily exploring the nature of human communication. Communication is rapidly evolving in a similar way to our physical ecology – archaic technological modes become out-dated, as they are ‘outmoded’, whilst the world has also shifted to a moment of extreme precarity.

The metaphor of weather looks at the nature of basic human contact. Weather acts as the object of essential small talk that binds humans to one another. The irony inherent is that as we enter the Anthropocene[1] there is a sentiment of trying to ‘save’ nature – but until this point of crisis it is seen as somewhat ‘inconvenient’, and ‘outside’ society – but in actual fact it is essential to our existence. The question lies herein—can we exist without nature? Would we still be nature, without nature as we know it?

One must wonder how the weather vent—as ongoing archive—will shape as time goes on and us our climate condition evolves alongside our society.

ER: You’ve said, ‘so often there are human infrastructures in place to facilitate the unfounded and unpredictable, we may find that this is not the case within the natural world, as it is abject, outside our control’—In our culture there is an intense desire to solve any problem we face. How do we then reconcile our need to fix something as uncontrollable as the weather?

AG: Our basic socialised function is to control as many things as possible in our life. To be unable to control things we are often seen as weak, or imbalanced. Weather is basically the one thing humans haven’t been able to dominate or control—yet they love to complain and talk about it all the time, it draws people together in a frivolous, benevolent way.

There is something deeper to these considerations however—about control and the capitalistic urge to ‘fix things’, ‘replace’ everything and to ‘better’ oneself. We have now reached a point of no-return, where our desire to ‘acclimatise’ and air condition our apartments, to heat our beds with electric blankets, has pushed the natural climate into a situation that we weren’t able to envision. This condition is going to play out over the new century and beyond, as we scramble to fix a landscape of errors that we cannot quite see or interpret at this moment. 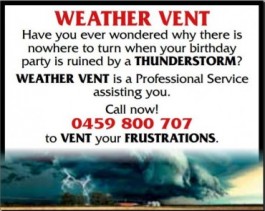 ER: Through the Weather Vent hotline you’ve created a platform that elevates the act of complaining into a performance. How do you think everyday performances, such as complaining about the weather, influence us sociologically and psychologically?

AG: Weather Vent is essentially a framed presentation of an everyday ritual where the act of complaining is consolidated and presented as an artwork. The documentation, through voice recording, aims to draw out more ‘performance’ than what would usually occur. The act of ‘venting’ is cathartic and psychologically beneficial for the participant, thus being presented as a ‘public service’. The act of the complaint in the digital age is usually less performative, with a written function on socialised media.

As stated by Guy Debord in his short essay A Sick Planet: ‘Pollution is in fashion today, exactly in the same way as a revolution: it dominates the whole life of society, and it is represented in illusory form in the spectacle.’[2]

There are many scenarios that may enact a subtle frustration that would warrant a complaint. Attending a wedding might ruin your dress if there is a thunderstorm. Perhaps you swim in the ocean after the rain and get sick for a week.  These instances would usually go out to a partner or friend, but perhaps the weather vent hotline is a more convenient solution for all.

Although most of these scenarios are banal, there is the occasional weather condition that itself becomes a spectacle—for example the ‘Manhattanhenge’ in New York, or a few years ago when Sydney was covered in red dust. These natural spectacles waver between a fine line of awe, the sublime and the abject. Amongst our everyday frustrations with weather and other such banal issues, lies the looming spectre of this unknown power and potential for crisis within both the natural and civilized world.

ER: The technologies that Weather Vent uses—newspaper advertisements and a telephone hotline—are becoming obsolete in the Internet Age. What drew you to these out-dated forms of communication? How do you think digital technologies have changed the way we share information and knowledge?

AG: As smaller communicative services are phased out and everything becomes digital and ‘socialised’, it is also becoming less sociable in a way—’convenient’ connections processed through an algorithm are not surprising or interesting, or procuring randomness. In turn, communicative services are increasingly becoming more bureaucratic and intrinsically linked to ‘socialised’ media institutions, which do not facilitate randomness and eccentricities as much as analogue services would/do.

I’ve always been intrigued by classifieds. As a teenager I would constantly respond to band adverts and met a few people with wildly varying results. Classifieds have a function—to provide something for someone who is looking, and there is a simple beauty to that action. Curious people look through the classifieds—and there’s something about eBay and Gumtree that isn’t the same, or doesn’t hold the same innocence and patience.

I found that regional newspapers hold a bearing in the community in ways that larger papers cannot. These papers are more community-based and less bureaucratic, and for those reasons they interest me as an artist and collector of information and responses.

ER: Weather Vent relies on the participation of the audience, and in your role as artist you seem to act more as a facilitator and catalyst, than a creator or performer. You’ve set the parameters of Weather Vent, how do you feel about allowing the work to take form through the actions of strangers?

AG: This ‘artwork’ is essentially a public service. I am a collector of information. I ask the respondents to leave their postcode for statistical purposes and I’m interested about the varying responses and where they come from. I’m interested to listen and glean through the response’s information and entertainment, as much as it is a serious project with deep issues and metaphors to explore.

I want to create art that relates to everyday people, and that they would want to engage with in a way that suits them. I don’t want to be involved with art institutions that predominantly engage with other artists and the art going public—hence the involvement of newspaper classifieds and the like. The work essentially is ‘authored’ not by me—I merely facilitate the device—but by the respondents.

A lot of my installations are user-initiated works where my role as artist is simply the facilitator. I feel this may be the case because I engage on many intensive physical platforms through my role as a musician, which I have done all my life. I find that as I get older I’m more interested in creating on a platform where I am less involved physically. There is something that fascinates me about being the person holding the strings behind the curtain, the person looking through the keyhole. There’s a sense of comfort in that, and there’s also a deep curiosity too.

Weather Vent will be on display at Cross Arts in Potts Point from 11 March. You can call the hotline and vent your feelings about the weather on 0459 800 707.

[1] The Anthropocene umbrellas the human initiated ecological state we find ourselves in. The precariousness of this situation, explored through human, ecological and economic history presents a conviction of immense arguably irreversible change.

We already live in the Anthropocene, so let us get used to this ugly word and the reality that it names. This geological epoch is the product of the last few hundred years of our history. The Anthropocene is the sign of our power, but also of our impotence. It is an Earth whose atmosphere has been damaged by the 1,500 billion tonnes of carbon dioxide we have spilled by burning coal and other fossil fuels. It is the impoverishment and artificializing of Earth’s living tissue, permeated by a host of new synthetic chemical molecules that will even affect our descendants. It is a warmer world with a higher risk of catastrophes, a reduced ice cover, higher sea-levels and a climate out of control.—Christophe Bonneuil and Jean-Baptiste Fressoz, The Shock of the Anthropocene (http://www.versobooks.com/blogs/2502-welcome-to-the-anthropocene-a-reading-list)

Esther Rolfe is a Sydney based independent writer and curator. She is currently completing her Masters of Art Curating at the University of Sydney.

For her Masters thesis Esther is researching the collaboration of Thomas Demand and architects Caruso St John, and examining the intersection of architectural theory, exhibition design, and contemporary art.

Angela Garrick is a Sydney based artist who practices across film, collage, painting, installation and music. Recently, Garrick has been exploring the intersection of psychology and space, with a particular focus on notions of Australian identity and sociological relationships. As part of SafARI 2016 Garrick will exhibit Weather Vent, an ongoing project in which she sets up and advertises a hotline for locals to call when they need to vent their frustrations about the weather.