Recreating the Aboriginal Tent Embassy is an ongoing project for Aboriginal Australian artist and activist Richard Bell. Since 2013, Embassy[1] has appeared in galleries, biennales and other public spaces around the world. It consists of a beach umbrella or a large green tent, surrounded by placards such as ‘white invaders you are living on stolen land’ and ‘if you can’t let me live Aboriginal why! Preach democracy’.  The installation’s commanding façade evokes the original protest that took place outside Canberra’s Parliament House in 1972. What began with four Aboriginal activists from Redfern, who erected a beach umbrella to proclaim the site as the Aboriginal Embassy, led to a vast demonstration against the government, its claims on Aboriginal land, and the realities of poverty and racial oppression[2]. From multi-coloured tents, which became a symbol of Aboriginal sovereignty, to flags, slogans, leaflets promoting community development programs and services, and performances by the National Black Theatre, their protest combined multiple aesthetic expressions that together offered a powerful challenge to established conditions. Importantly, this challenge was enhanced through devices that linked the Indigenous struggle to global movements for black social change, such as the ‘international flag of black consciousness,’[3] as well as the activist’s dress, which was modelled on the Black Power movement and included black afros, leather jackets and clenched fists[4]. It is this global system of identification that Bell does not only reference, but also extends, as his travelling Embassy forms connections with local communities, histories and experiences. In so doing, Bell continues the original protest and constantly amasses its power to promote social change for black minorities and other disadvantaged communities around the world. 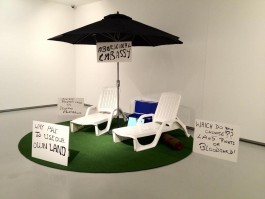 The above conclusion comes from interpreting Bell’s Tent Embassy as part of a history of global black political aesthetics. This history involves black activists crafting powerful political systems of identification that attempt to transform ongoing inequalities. As Crispin Sartwell highlights in his article ‘Red, Gold, Black and Green: Black Nationalist Aesthetics’, political systems are aesthetic systems that appear in different media: ‘they are no more centrally textual than they are centrally systems of imagery, architecture, music, graphic arts, etc.’[5] This is similar to the French Philosopher Jacques Rancière’s suggestion that the ‘distribution of the sensible’ is the key means of describing the relationship between politics and aesthetics[6]. A given distribution, is made up of a multiplicity of visual, textual and audial aspects that determine who is included and excluded from a particular social order. Rancière argues that social change takes place when those who are excluded, seek active involvement in defining the rules of society, attempting to create new structures that dictate what is ‘visible, sayable and possible’[7]. Therefore, it is in the interface created between different aesthetic expressions that a break with the established political order takes place, or the formation of a new distribution of the sensible arises[8].

In the early twentieth century, Marcus Garvey and his organisation the Universal Negro Improvement Association (which originated in Jamaica and was subsequently established in New York in 1917)[9], realised that the existing distribution largely excluded black minorities, who were dominated by western colonial and imperial power structures. Against this framework, Garvey promoted the principles of self-empowerment, economic independence, cultural pride and connection to country through a variety of aesthetic expressions. From his own persona, to speeches, flags, poetry, art, music, journalism, religious works and clothing styles, these aesthetic expressions merged together to challenge dominant social hierarchies[10]. The challenge became more powerful as Garvey’s political system formed connections with black minorities around the world (including Indigenous Australians)[11] – articulating a new ordering principle of the distribution of the sensible that included a global black community of participants.

Similarly, the Black Power movement of the 1960s and 1970s was shaped by African American activists before expanding internationally. This political system moved from manifestos, speeches, political personas, community development programs and black arts initiatives, to black panthers, berets, leather jackets, and raised fists. A loose coalition of activist groups in Australia such as The Australian Black Panthers of South Brisbane, the Aboriginal Activist groups in Sydney’s Redfern, and the Aborigines Advancement League in Melbourne, began to implement the political system of the Black Power movement[12]. As outlined in the opening description, the Aboriginal Tent Embassy was its own aesthetic system that was inherently connected to that of the Black Power movement. In fact, it has been described by Indigenous Black Power activist Gary Foley and historian Kathy Lothian as not only a monument of land rights, but also Australia’s most iconic and enduring symbol of Black Power[13]. 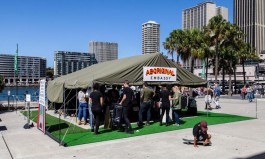 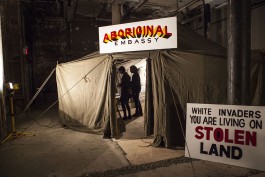 Bell’s contemporary multidimensional aesthetic was shaped by the Aboriginal adoption of the global phenomenon of Black Power. During the 1970s and 1980s, he was involved in Australia’s Black Power movement, interacting with other activists, and participating in demonstrations to protest discrimination against Aboriginal people[14]. As Bell comments, ‘I’m stuck in the days of Black Power . . . I still believe in that ideology, so that finds its way into my work.’[15] Moving between painting, video, installation, performance, writing, social media and ‘Richie’ his pseudo personality, Bell has crafted his own aesthetic system that offers a continuous challenge to established social orders, demanding action against the oppression of Aboriginal people.

The connection between Bell’s practice and the global history of black political aesthetics is articulated in his recreation of the Aboriginal Tent Embassy. These recreations are adaptive political systems. They take those of the original Tent Embassy and the Black Power movement more broadly, and combine them with local aesthetic expressions that represent ongoing struggles for power.

For example, as part of the 20th Biennale of Sydney, Bell’s Embassy was assembled on the forecourt of the Museum of Contemporary Art Australia. Here, the tent drew passing civilians and art audiences to explore the local history of black politics. This was seen through conversations between Bell and past Black Power leaders from Redfern, as well as film screenings such as The Redfern Story by Darlene Johnson, which explores the history of The National Black Theatre. Embassy also presented contemporary aesthetic expressions in the form of poetry readings, hip-hop performances, and workshops, including ‘Next Generation Speak’, which saw black activist and poet Lorna Munro talk to kids from Redfern and Waterloo about their experiences growing up with the Redfern Aboriginal Tent Embassy[16]. It also housed the international situationist style ‘Black Experience Tour’[17]. This immersive experience began with placard making sessions and rallying cries, and ended with a tour from Embassy to Old Parliament House. Indigenous and non-Indigenous people dressed in ‘artactivism’ t-shirts, and carrying flags, placards and megaphones, were led by Munro, whose path was influenced by her own feelings and the psychogeography of places that have witnessed the treatment of Aboriginal Australians since colonisation. Through such encounters Bell’s Embassy directly engaged in the ongoing struggle for Aboriginal recognition in Sydney, and became more powerful as local participants embedded new expressions into its political system.

Embassy was also recreated in New York as part of ‘Performa 15’ —an international exhibition that explores the impact of live performance on twentieth and twenty-first century art. Bell took the world’s longest ongoing protest beyond the Australian context to heighten its connection to global black politics. This became evident in his ongoing collaboration with Emory Douglas — the former Revolutionary Artist and Minister of Culture for the Black Panther Party. Bell and Douglas created a series of ephemera that were displayed inside Embassy, and also spoke about their collaborations as a force of global solidarity. Such conversations were complemented by film screenings about twentieth-century Aboriginal activism, and contemporary counterparts such as Vernon Ah Kee’s Tallman 2010, which documents race relations on Palm Island[18]. Embassy also involved a ‘public meeting’ to explore the question ‘What is the future of solidarity?’ It included Bell, Douglas, Ah Kee, Australian artist Stuart Ringholt, Indigenous American artist Alan Michelson, Autumn Marie of #BlackLivesMatter and the Canadian First Nations activist Sylvia McAdam from Idle No More[19]. Embassy’s political system was extended to draw connections with the global #BlackLivesMatter movement. Further, it instilled a sense of solidarity with the ongoing fight for Indigenous sovereignty in North America and Canada, rearticulating the global black community first established during the Marcus Garvey movement. 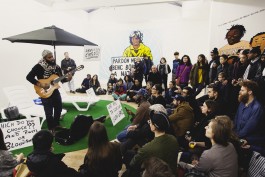 The future of solidarity also involves forming relationships with other people and communities who have suffered similar realities.  This was seen in Bell’s most recent iteration at the Qalandiya International in Jerusalem, where the symbolic sign of the Aboriginal Embassy was written in Arabic, connecting with the Palestinian struggle. Through such interactions, the political system of Bell’s Embassy becomes more powerful. It becomes what Nikos Papastergiadis defines as a ‘context shifter’. In continuously forming relationships with people and their histories, each contributor ‘[goes] beyond their own certitudes and participates in collaborative knowledge making that is not just the sum of previous experiences’[20]. This argument relates to Rancière’s proposition that politics is found in the interactions between specific types of aesthetic forms, and the ‘interpretative communities’ constructed around them[21]. It is in these interactions that a division of the sensible can be formed, as is seen when Bell’s Embassy is erected in different contexts. Each time, it becomes a meeting place for a global community of participants, who can watch provocative videos, contemplate revolutionary images, participate in workshops, listen to poetry and performances, or hear Bell and his collaborators revisit the past, in order to stimulate new conversations and the potential for change in the future.

[1] For the purpose of this essay, Embassy refers to all variations of Bell’s Tent Embassy. These include Prelude to Imagining Victory 2013, which features a beach umbrella, chairs and esky, and Embassy 2013-ongoing, consisting of a large green tent.

[6] Jacques Rancière, The Politics of Aesthetics: The Distribution of the Sensible, ed and trans. Gabriel Rockhill (London: Bloomsbury Academic, 2014), 7.

[11] See John Maynard, “Marching to a Different Beat,” and “In the Interest of the People: The Influence of Garveyism on the Rise of Australian Aboriginal Political Activism,” Aboriginal History 29 (2005), 1-22, for an excellent account of Garvey’s global black community. In particular, Maynard explores how Aboriginal activists in Australia embraced Garvey’s ideals and remodelled them to relate to their own situation and circumstances, dictated by the oppressive conditions of colonisation.

Alice-Anne Psaltis graduated with a Bachelor of Business Management and a Bachelor of Arts Honours (Class I) in Art History from the University of Queensland in 2015, and was also awarded the Donald Tugby Prize for Art History. While completing her studies, Alice-Anne worked as Front of House Attendant and Curatorial Assistant at the UQ Art Museum. In 2016, she took on the role of Education and Public Programs Officer at the UQ Art Museum. She is currently Public Programs Officer at the Queensland Art Gallery | Gallery of Modern Art. Alice-Anne also maintains an independent practice as an emerging arts writer, and has written articles for Jugglers Art Space, Arts Management Quarterly and also presented a paper at the International Australian Studies Conference in December 2016. Her main areas of interest include art and society, Australian Indigenous Art, art historiography and arts institutions as spaces for public participation and education.