Wrapped in a blanket on a chilly Adelaide afternoon I click on a link from artist Analise Minjarez who hails from El Paso, West Texas, sent with the instructions: ‘To set the mood, please view this video.’ The animated gif unfolds a panoramic view from atop the Franklin Mountains that stand watch over her childhood home. The gentle notes of sixties Latin pop drifts across the dark mountains, brown planes and endless blue sky. Minjarez and fellow textile artist Sarita Westrup are daughters of the Rio Grande River, growing up on either end of the Mexico-Texas borderlands.

There is an aura that cocoons the western reaches of Texas. The oft-repeated phrase ‘Out West’ references a journey, a destination, a space, but also a mindset. Thoughts of the border region brings discomfort to the minds of many North Americans—who are more likely to have watched the 1996 film Lone Star, than set foot across the border into the ancient, fossilized coral reef of the Chihuahuan desert. The fear associated with this region is rooted in history, but currently revived in contemporary politics and media in the United States, reinforcing the centuries-old cultural narratives of the frontier. (FYI, if Donald Trump were to build his ‘wall’[i], this is where it would be). Collaborating on the project Tierra Firme, Minjarez and Westrup seek to forge a space within contemporary art that reflects this tension, but also the romance of a region that is rarely allowed to speak for itself.

Jess Day, Remember he’s on your side, 2016, still. Courtesy of the artist.

This fear is somewhat familiar to me. ‘The Outback’ is similarly, a place, a navigation, a colonial construct, a way of life. Each of these interactions with either landscape or concept is tarred by preconceived ideas. The daydream of colonisation echoes violence, displacement and genocide that become clearer as we open our eyes to the reality of what is told as history, existing today. Yet, the vast, geographical extremes remain unknown, ‘inhospitable’, and confrontational to coastal populations ensconced in gentrified sprawl. From the tales of colonial explorers who lost their horses and went mad; the three decade saga of Azaria Chamberlain, to thrillers like Wake in Fright (1971) & Wolf Creek (2005), ’the dominant contemporary Australian experience of anything that’s not an urban centre’ explains Western Australian artist Jess Day, ‘is always going to be an outside perspective.’[ii] As such, Day’s practice focuses on the ways that Western Australian landscapes are ‘lensed’[iii] or coloured by layers of cultural narrative. Through processes of collection, immersion and imagination, she presents tangible entry points for audiences to add their voice to a conversation about the forces of fact and fiction mingling to define this region.

If we hold the term ‘West’ to denote an imagined ‘site of national belonging’ as opposed to a location of ‘actual historical struggle’[iv] we come to see that the gap between embodied experiences and fictions enveloping them, is where these three artists find their home; and where we as participants in the work settle as well. Stepping amongst the geology in simulacra of Roca Ruca, 2014, Minjarez and Westrup ask audiences to look down from the endless vistas of the border, to focus on the building blocks of a humbling landscape recreated in cement. Presenting regionally specific slang that strays between badge of honor and offensive slur, names are woven in cord dyed with native indigo and hibiscus. These characters envelope fragments of imitated bedrock as though written by tensions physical and social, calling into question perceptions and ownership of language and space. Who is permitted to use these words? How is their ‘authenticity’ eroded by misuse? Where do they gain or lose their meaning? Revealing ‘an understanding of life without having to go through the process of figuring it out’[v] the works of Minjarez and Westrup muddy the concept of the border with equal touches of backstage access and academic critique.

By contrast, Jess Day’s Three Sites Three Nights, 2015 greets audiences with tropes from filmic representations of nocturnal landscapes. Out of the darkness looms an unidentified form, shifting, stacking, and organising, both within and without the spot-lit boundary of our perception. Narrative detail is withheld in favor of formal consideration of familiar spaces and objects. It is at the point of realising that suspense is lacking, and with no horrific climax to anticipate, the viewer’s attention shifts inward to observe how and why we leapt to such conclusions. News reports, movie trailers, high school history lessons and ghost stories that have coloured our mental image of the Australian ‘bush’, leave clues to the questions: Why do we expect the worst? How is this fear constructed? Are the things that appear so defined, just a fiction as well?

Day is currently constructing a ranger hut in her studio for a place she has never visited. Joan Lindsay’s gloriously open-ended 1967 novel Picnic at Hanging Rock and the subsequent film exposed a seemingly unbearable mystery to the anxiety that characterises non-Indigenous Australia’s collective imagination. This fiction and its geographical anchor have been dragged into the realms of geology, psychology, paranormal investigations, literary analysis and occupational wilderness survival skills, in efforts to experience the mystery. Day’s mise en scène collapses the hierarchy of discourses, challenging audiences to navigate a glut of narrative and explore the blurring of fiction and fact. 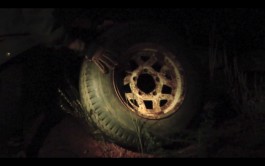 Within the sparsely populated western regions of two countries with not-too-dissimilar colonial histories, arises an anxiety inspired by the scale of landscape and cultivated by facts growing from fiction. With closer inspection, seemingly unquestionable pillars of the white Australian identity in relation to landscape are fragmented and situational. We find ourselves out on the edge of the world, looking to horizons of our own making, simultaneously aware of the multitude of edges being gazed at in every corner of the world.

[i] While campaigning for the 2016 Presidential primary elections, Republican candidate and businessman Donald Trump announced a policy to compel Mexico to pay for the construction of a wall along its border with the United States under threat of invoking the Patriot Act. See: https://www.donaldjtrump.com/positions/pay-for-the-wall