Afterward, this work comes to me in fragments, pieces I can’t quite fit together, a fractured body. A series of lightbulb flashes in a black room, shifting images seared onto my retina, bathed in green and purple light.

The walls are plastered up to the ceiling in what looks like plastic medical wrap. At the back of the stage, a single arched window remains uncovered. A blank eye. 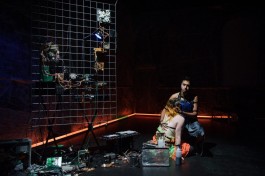 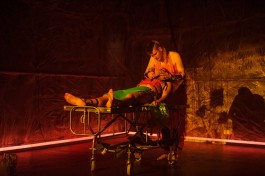 Two performers place their hands against the wall. ‘You’re just a meat boy,’ one performer says, over and over, turning and slapping her own pencil-skirted rump with each utterance.

This is a netherworld, a futureworld; a now-world that roils under the surface of the familiar. The work’s blurb uses the word coven. It’s a re-wiring of gender, a scalpel blade peeling back skin and stitching it together differently.

Opening scene: two figures embrace deeply, lovingly, before one nestles in to suckle.

Chapters spliced by darkness, each vignette holds the collision or embrace or entwining of flesh, the speaking of text both brutal and tender. Wordless gestures. Longings. Choreographed movements. Bubbling rage. Bodies rocking together, quietly held. The word splice, by the way, means both to separate and to cleave together. The word cleave means both to split and to grasp.

There’s a wheeled metal hospital bed; a podium. Behind a mesh construction festooned with stripped electronics, one performer, partially hidden, produces the sounds that are captioned on a screen. Golden synth. Springy wholesome piano. An undercurrent of noise.

One performer is shackled to the hospital bed by another. Her body arches and shudders under electrodes and crashing sound. The other figure comes to her, holds her head tenderly.

In twining dialogue the performers relate the history of oestrogen supplements, harvested first from the urine of pregnant women, then (to increase supply) from pregnant mares. This sounds barely believable, but I later read that Premarin, the major brand they’re referring to, does indeed stand for ‘Pregnant mares’ urine.’ (For the record, it had never occurred to me to wonder what’s actually being tested when you pee on a stick.)

They trace the creation of synthesised oestrogen in a lab; the mad scientist gets sucked off in a storm of noise. They intone: We no longer have to steal our sisters’ contraceptives. 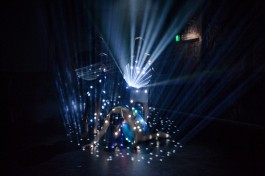 When they strip, it’s an unbandaging rather than a tease.

One performer enters, eyes lowered. She moves in a dance with the others, bodies undulating, limbs twining. She moves to the front of the stage, looks up. Beat. Her eyes are eerie green holes. I know that they’re just contact lenses, but some lizard part of my brain recoils, scrabbles away.

Another, makeup a bruise of greens and purples, gazes out, an embodied ache; speaks poetry to the audience, shifts into another language. The captions don’t translate but switch into a different script; I think it’s Arabic or maybe Farsi? They look dead at us: ‘You don’t get to understand. It’s not that kind of story.’

Projected into the arch, a figure speaking in sign language. There are no captions; this is not for me.

Even when it seems like English, this world exists in a language I don’t quite know, can’t fully grasp.

There’s sensuous flesh, there’s fury, there’s a purple smudge of makeup, there’s strapping, there’s a rising grinding score of electronic noise. At the end, a reprise of the opening scene: the embrace, the suckle.

But everything has changed: the characters are transformed. They have unfurled themselves, they have strapped on armour. They have become terrible gods, silhouetted by lightning, wild-eyed and glorious. They are ready for battle.