The best way to get your head around the curatorial premise of Manifesta’s 11th iteration, What People Do for Money: Some Joint Ventures, is to think of it as an extension of its curator’s practice. Christian Jankowski, well known for colliding the expected (and unexpected) and placing viewers in various social encounters, has pushed this uncomplicated gesture to new heights. Jankowski invited artists to select a profession from a list of over 1000 possibilities; they then met someone of that profession who became their artistic collaborator. The result, I hoped, would be a complex yet playful series of collaborative situations, moments, and outcomes. I wasn’t disappointed. ‘Joint Ventures’ produced over 20 new commissions, by established and lesser-known artists, which were contextualised further by ‘Historical Exhibition’, a themed selection of work produced in the last 50 years, curated by Francesca Gavin.

Situated across four major venues – Löwenbräukunst, Helmhaus, Pavilion of Reflections, and Cabaret Voltaire – and various satellite venues across Zürich, ‘Joint Ventures’ played tit for tat with ‘Historical Exhibition’, falling short only at Helmhaus. The most memorable commission there was Michel Houellebecq’s collaboration with medical director Henry Perschak, titled Is Michel Houellebecq ok? (2016), where Houellebecq underwent a series of tests and scans at one of Zürich’s leading and most exclusive clinics. The scans, exhibited alone in a gallery space, were fascinating to look at, however the dimensions of the work were broadened by the option to visit the clinic to pick up a copy of the results, worth it if only to experience how the wealthy spend their money. 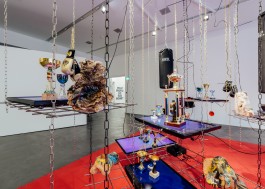 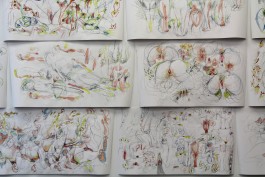 Heading to the Löwenbräukunst I was welcomed by Ultra Violet Ritual (2016) by Matyáš Chochol, a chaotic assemblage of upturned monitors, ceramic vessels, boxing gloves, chains, and trophies entangled together above a red carpet. The appeal here lay in the process, this work commemorating a long-term engagement with Thai boxing world champion Azem Maksutaj and members of his gym in Zürich.

Continuing through the Löwenbräukunst and amongst a number of significant works, a single photograph, Untitled by Maurizio Cattelan captured my attention, of a girl in a wheelchair caught in motion gliding across a lake. Stunning in its simplicity and peculiar in content, I read the story behind this image. The girl is Paralympian Edith Wolf-Hunkeler, and she did in fact perform this act on a floatation device launched off the Pavilion of Reflections. The spectacle of this image alone is enough, yet I do wonder if I would have had a stronger reaction were there a video of the event instead of a single photograph.

Moving up into Mike Bouchet’s dedicated enclosed gallery space, I came across his work The Zürich Load (2016), a ‘collaborative sculpture…composed of one day’s worth of citizen’s waste product collected on 24 March 2016’. Can you imagine my intrigue? Upon entering, the smell of ammonia was strong, a unique fragrance apparently designed to ‘enhance the viewer’s experience’, pushed through the room evenly by several fans. I was alone in the room looking at the waste matter, quite literally piled low and wide across the floor. The installation was strikingly beautiful in its enormity and careful construction; however, my sympathy fell to the logistics of such a mammoth operation.

From here the tit for tat continued between the parallel exhibitions, but the new commissions came out on top. The high points worth a mention include the anxiety-inducing photographs of dental situations titled Intra- & Extraoram (2016) by Torbjørn Rødland, and Carles Congost’s short film Simply the Best (2016) relaying the preparation of a major tourism event inspired by Tina Turner’s hit, Simply the Best. No words needed here, this work was brilliant. 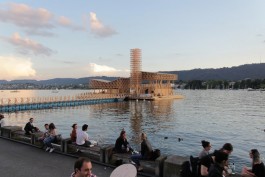 I spent some time at the Pavilion of Reflections, an open-air cinema presenting the making of a selection of the commissions. Throughout my trip, this was the only time I felt immersed in the Zürich culture and way of life on a steaming 30-degree day – swimming, drinking, and smoking were the norm and I happily obliged. This sense of belonging is often missed when producing events of this scale; Manifesta 11 was all encompassing and took you beyond the gallery space into the community and life of Zürich.