When I was asked to write this review, my first thought was “Wow, I love that show. But are you sure you want a wadjela (white person) to write it?” So I asked my mate Kobi Arthur Morrison if he wanted to write it with me. He agreed, so we met up, went down to the gallery and had a look around one day.

Kobi was buzzing with energy. Kind and reflective, he paced around the rooms dictating his astute observations to himself like Special Detective Agent Cooper in his dictaphone. We bumped into Martu artist Curtis Taylor inside the gallery. He was there taking his Father to see his artworks made with Yolngu filmmaker Ishmael Marika.

This room blew both of us away, and felt quite separate from the rest of the exhibition due to the raw intensity. Upon walking through the doorway we were greeted by five intricate pieces, tied together by a complex spear artwork in the centre of the room, with a backdrop of old televisions displaying various aspects of desert and coastal Aboriginal culture. The hanging spears cast shadows on a circle of red desert and beach sand. The TV screens held flickering home camera footage of a blood-letting initiation, TV snow static and images of a female elder teaching a youngster traditional weaving. It’s striking to see the various contrasting images on the televisions as they invoke different emotions from screen to screen. Curtis commented to us about feeling inspired working with Ishmael, and artistic freedom to not be labelled as only a filmmakers but as contemporary artists who works in various mediums. 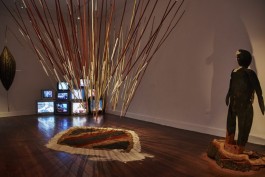 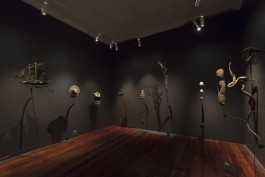 The cross-cultural convergence going on here between Curtis, Ishmael and their mob felt very special. Martu desert mob and Yolngu saltwater people side by side, elders from one mob teaching another to make spears on their country. We rarely get to witness conversations like this in our southern-coastal-capital-centred Australia. In this room though, I felt a strong sense of mutual respect and revery. A respect for country, for language, for song, dance and art. A strong spirit of intimacy and vulnerability also. As cultural theorist Brene Brown argues, all true strength must come from a place of vulnerability. If we want to approach a deeper sense of togetherness and identity in this country, maybe this is how to do it. Revery, mutual respect and vulnerability. Listening to the old people and connecting to your mob and to your country. Uncle Noel Nannup once told me; our future is the old way, and the old way is our future. Looking up at the circle of spears made by elders in the desert, hovering alongside spears made on the beach in East Arnhem Land, I began to wonder to myself, maybe this is what we need to head towards. Is this perhaps what a true reconciliation between cultures might look like?

The next room contained a collection of works by Perth artist Neil Aldum with Balak Artists from the Mornington Peninsula, on Bunurong country. Utilising various material such as metal and kelp, the artists have captured the intimate relationship between the people and their coastline. Hanging objects line the edges of the room, suspended from an iron pendulums with a harpoon-like barb on the bottom. Each of the iron barbs were counterweighted by an igneous rock, which were gathered from the coastline of the peninsula by the artists, and with approval of local elders. The walls of the space have been painted black and lighting emphasises a sense of eerie-ness intertwined with the maritime culture that is embedded with the modern Australian psyche.

A video accompanied the works cutting together drone footage of the Mornington coast full of the striking cool colour scheme of Baluk country, lots of cool blue and green tones radiating from the coastal rock face and scrub. This room echoes a resounding sense of the universal connection to the beach and the ocean, shared amongst people of all cultures within this nation. I thought about my Greek Grandfather arriving by sea to Bunbury as a migrant in the 20’s and his lifelong connection to the sea as an amateur boat builder. I thought about a ten year old Karen-state refugee I know, who’s dad takes him all the way from the suburbs of Gosnells to South Freo to go fishing any weekend when he’s not working.

The collaboration between Claire Healy and Sean Cordeiro (NSW) and the Martu community of Parnngurr is one of the largest in the show. This room is brimming with dystopian Mad Max-esc imagery. Old rusted car doors with the widow section filled with traditional Martu weaving of wool, reeds and raffia materials. The post-apocalyptic meshing of rust and red dirt stained on old truck bonnets alongside oddball scribbled paintings by teenagers captures a sense of the intensity and wildness of the desert. Car bodies have been immortalised with badass predator animal names painted on their open white panels. In between and around these beautifully placed works, humble dystopian artefacts hide like slaters in a post-apocalyptic landscape; an old xbox controller caked with red dirt in the cracks between the plastic, a crumbling wrestling action figure, an old Jesus poster. In an interview Claire and Sean talk about their interest in the absurd cycle of mineral extraction, use and abandonment returning the car body back to the land. I wonder what the Martu kids in Martumili think about all these old cars though, maybe they just make a good elephant graveyard. 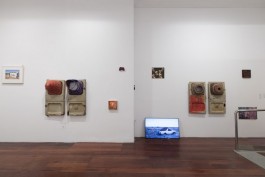 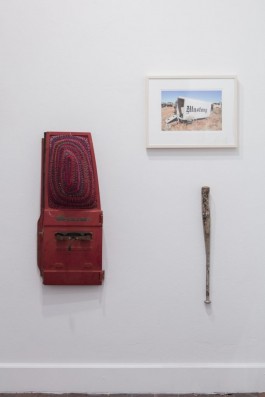 The most intriguing take-away from a panel discussion held at FAC featuring many of the In Cahoots artists was their frankness and tact in unpacking the disconnect between this warm-and-fuzzy celebration, and the tense, prickly reality of the active process of collaboration. In pulling apart the term ‘collaboration’, these artists highlighted the dangerous implications of equality, and the impossibility of evenly distributed power balances within cultural institutions. The artists seemed invigorated by the opportunity to dissect the complex realities at play behind the glossy narrative we’re so accustomed to being presented in the promotional flyers for a show. The artists dove into vulnerable and honest dialogue about the impossibility of equality within collaboration, pan Aboriginality, the city-regional divide, reconciliation and the looming shadow of post-colonialism upon our institutions. Where are we? Where are we going next? Who are and how do start reconciling with each other and ourselves? Whatever happens next, it will require the patience, generosity and transparency that Erin Coates’ curation embodied in this wonderful exhibition.

Kobi and I spent the most time in the first three rooms. It was probably one-part over-excitement or emotional exhaustion, one-part running out of time and both needing to get back to work, and one-part local pride just wanting to get behind Curtis and Neil. We had a quick look through the other ones, which were filled with rich wonderful stuff. But by the time we made it to the Mangkaja Arts and Trent Jansen’s eery hairy-man sculptures and the stunning Aboriginal science-fiction wonderland put together by Tony Albert with the Warakurna artists we’d done our dash.

What was evident from the exhibition as a whole was a strong sense of duty of care over the deeply sensitive and often sacred stories being shared. One recurring theme that really pricked my ear was the playful exploration of science fiction and fantasy ideas and aesthetics. In the age of a Maori-directed Thor: Ragnarok, ABC indigenous fantasy Cleverman and the Emmy award winning VR project Collisions by Lynette Wallworth, the career and education potential for young blackfellas options are expanding quickly. Personally, I can’t wait to see First Nation stories lighting up our screens and filling our imaginations more and more. Wadjelas, watch this space.

Anyway, Kobi and I have seen each other three or four times since. At Koondarm choir practice, at the Peace Boat gig at B Shed and also early one Sunday morning near Bather’s Beach singing together in a limestone tunnel. We were singing the Jimmy Chai song ‘I’m a Long Way Away From My Country’ in the old whaling tunnel underneath the roundhouse. That roundhouse. The one built by blackfella slave labour in 1831, the first building constructed in the Swan River Colony. We sung that song in tribute to the brothers who were chained up in there, some of whom were from hundreds of kilometres inland, some of them lawmen, all of them sons, brothers and fathers. We all stopped later on the walk on Cliff St to read a poem by the brilliant Nyoongar poet Kim Scott. It ends with the line, ‘a brother calls from within’.