I seem as in a trance sublime and strange

To muse on my own separate phantasy,

My own, my human mind, which passively

With the clear universe of things around[1] 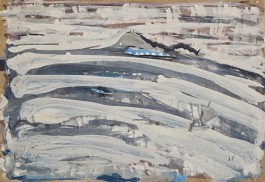 Many of the things Ian Fairweather made never lasted. He painted on the pages of The Courier Mail with soap, Clag glue and Borax. He favored Reckitt’s Blue laundry powder as a pigment. A single painting might contain over seventy layers of paint. Thirty paintings that he sent from Australia to London arrived as one solid impenetrable mass. On returning from a 1929 visit to Canada, he sent for a trunk of drawings he had made there: it arrived heaving with Silverfish, their bellies full of paper. He should not have been surprised at the life of a mayfly but probably was.

Some time during 1951, Fairweather began to study the tides. The Darwin coast—where he lived in the hull of a useless boat—was littered with postwar junk. He found two aircraft fuel tanks and bound them to a piece of salvaged wood, food parachutes made a sail and a length of clothesline connected it all together. At night on 29 April 1952, between where the Bottlemart Express Darwin Trailer Boat Club and the SkyCity Casino now sit, Fairweather pushed his three-meter raft into the Timor Sea. He was sixty years old and no sailor.

For much of time he was at sea he lay on his back, navigating by the stars toward Portuguese Timor, the island where he believed he had made his best paintings. As a prisoner of war, he had been confined to a cage for several weeks. The ocean—which lapped ceaselessly at his feet—the birds that circled overhead, the sun, the raft; another cage. Robbed of his conventional grip of time, his thoughts became endless.

After sixteen days the raft, pushed off course by storms, was fortuitously caught by the currents of Roti Island, the last dot of land before the desolation of the Indian Ocean. Fairweather had survived to see his own obituary written in the papers, but he had arrived at the wrong island. After being imprisoned in Indonesia, he was repatriated to England, where he promptly burnt his remaining paintings.

Ian Fairweather’s signature is IF. He was not ignorant to the coincidence of his name; in the late 1940s and early 1950s he used the Chinese character for “if” to sign his work. It framed his paintings as conditional propositions: If only. As if. IF. It was the process that mattered to the painter, who left it to harbingers of time—mould and dust—to finish the job. 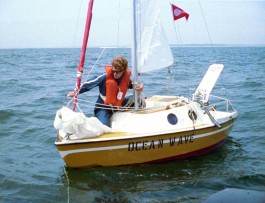 The eleventh-century yogi-sage Jetsun Milarepa was rumored to be a supernatural runner: an eccentric skill that enabled him to run at an extraordinary speed for days without stopping. As he passed by he appeared to float above the ground. In Paris, at the turn of the last century, Constantin Brancusi encouraged the rumor that he was Milarepa reincarnated. In 1904, Brancusi had walked—at apparently great speed—from Bucharest to Paris. Or so the very short story goes. ‘Throughout his life’, wrote Robert Hughes, ‘legends stuck to Brancusi like burrs.’[2]

Brancusi pursued an essential account of his environment: the ovoid mouth of a newborn, the head of a woman crowned by a bun, a rooster made in the image of its comb. He did not have a stake in ‘the modernist obsession with the abstract state of illusion, with virtual effects at the expense of literal facts.’[3]That he believed his sculptures to be real made them all the more extraordinary; when they were finished, they came to resemble burnished shadows. Light contradicted mass.[4] Brancusi’s many photographs of his own work are out of focus, overexposed, underexposed, printed in negative, smeared and spotted with emulsion. But where they fail technically, they succeed imaginatively; the nature of things becomes manifest. In the sequential frames of the film negative and the photographic still, matter becomes porous, and Brancusi was able to prove the many adaptations of a single immobile form. Kinetics were clunky, sculpture was finite, but photography expressed the contradiction he felt he could not capture in three dimensions: the limits and limitlessness of light.

On the floor of his studio he arranged constellations of sculptures that, like the maps of the stars, were to be understood through their history rather than their science. Sculptures that he sold were cast in plaster, so that his arcane patterns might remained unbroken. In a corner of his studio a discarded wooden dais cut from a tree trunk sprouted tiered umbrellas of vertical foliage. Brancusi was jealous; he spent days carving out the essence of things, while nature made monuments overnight. He photographed the plant and then himself. In the final image he sits amongst his constellations: an Endless Column in oak rises out of his head, two more columns in plaster and wood prop up the firmament behind him, a Fish carved in yellow marble skirts behind his back, all things about him appear in flux. Through the new magic of superimposition, he appears to have swallowed the plant whole, it blooms from his waist to the top of his head.

Unlike the Romanian funereal poles they are inspired by, the jagged strata of Brancusi’s Endless Column’s indicate nascent life. In drawings, he imagined his columns—of which there are many versions—as impossible staircases between Earth and the heavens; a racetrack for Brancusi the runner. Despite these lofty ambitions, the artist rarely confused endlessness with infinitude; his columns had distinct borders and, in reality, maintained their own integrity. In his own photograph of his Endless Column at Targu Jiu, the camera appears to shake with the force of the column’s dark ascent. Viewed from its base, we have to squint with the photographer into the sun to see it. In negative, the column rips the sky apart.

But Brancusi didn’t just want spectators for his Endless Column; he wanted citizens. Towards the end of his life he proposed to build a column on New York’s Central Park.

It would be greater than any building, three times higher than your obelisk in Washington, with a base correspondingly wide—sixty meters or more. It would be made of metal. In each pyramid there would be apartments and people would live there, and on the very top I would have my Bird—a great bird poised on the tip of an infinite column..[5] 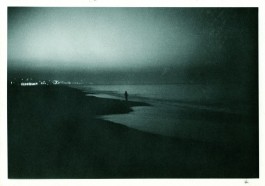 Bas Jan Ader stands in the forest and falls to the forest floor. He hangs above a river from the sagging limb of a tree. He lifts a slab of concrete over a cluster of light bulbs and drops it. He climbs into the hull of the 12-f00t pocket cruiser Ocean Wave, and launches himself into the Atlantic Ocean.

Bas Jan Ader wanted to survive, probably because his own father had not. Bastiaan Jan Ader, a Calvinist minister, sheltered Jews from the Nazis during World War II. Soon after his son’s birth, he was arrested, imprisoned, taken into the woods and shot. In Ader the artist’s world, heroes didn’t make it.

In 1961 the yacht that Bas Jan Ader had been traveling on from Morocco shipwrecked off the California Coast. Fifteen years later, Ader—for whom life was a closed circuit, like one of Muybridge’s studies of motion—embarked on the return part of this journey from Cape Cod’s Cornwall toward Cornwall, on the coast of Britain. A black and white postcard he prepared for his expected exhibition at the end of the journey at Art & Project in Amsterdam, depicts the artist onboard Ocean Wave. “In search of the Miraculous” is written in curlicue font at the bottom of the image. If Ader were to have had a business card, this would have been it.

Ader’s route across the Atlantic was not untried. He was following the same passage as Robert Manry, a gentleman sailor from Massachusetts, who had successfully made the passage in a tiny sailboat in 1965. Manry completed the solo crossing of the Atlantic in 78 days, Ader wanted to do it in 60, in a 12½-foot cruiser built for lakes and dams. The tiny craft was not built to sail into the blue.

In In Search of the Miraculous (One Night in Los Angeles) 1973, Ader walks through the city at night. He carries a torch, and as night settles he turns it on the corners of the city, its highways and fences, underpasses and lovers lanes. His migration is abruptly halted—as it was for many others—at the Pacific, where he arrives just before dawn. The logic of his walk through Los Angeles precedes his journey by sea in the Ocean Wave. Ader found nostalgia and logic useful companions: old songs, postcards, the language of film noir and journeys by land, sea and road were all ways to retell the story of his own malady; homesickness, in the shape of a bullet hole. The serialization of his life— falling, walking, sailing, crying—revealed the frustrated logic behind his images; in order to succeed, a hero must be tested.

A story that began when his father was taken into the woods and executed, ended when Ader fell from his boat into the Atlantic. The Ocean Wave was found without its sailor off the coast of Ireland in 1974.

Stella Rosa McDonald is an artist and writer based in Sydney. She has contributed writing to Vitamin P3, New Perspectives in Painting (Phaidon), Ocula, The Art Life, Art & Australia, Art Collector and her fiction and poetry have appeared in Overland and Voiceworks. She holds a Master of Fine Arts by Research from COFA, UNSW, where she received the 2014 Dean’s Award for Research Excellence. She is the associate manager of Minerva, Sydney.