Review: The Commute at Institute of Modern Art

Marking a first for Meanjin Brisbane’s Institute of Modern Art (IMA), The Commute is an exhibition consisting entirely of Indigenous and/or First Nations artists and curators.[i] With cultural identities from sites in Queensland, New South Wales, Victoria, Sāmoa, Fiji, Papua New Guinea, Hawai‘i, and the west coast of Canada and the United States, the group is united under the geographic descriptor of the Pacific Rim.[ii] The title for the exhibition is short-hand for the various migrations, trades and exchanges that connect peoples, particularly those driving displacement, diaspora and ecological devastation. The common connection among the Visiting Curators also lay in their platforming and prioritising Indigenous people and art making, exercising a methodology that can name, speak and do without (non-Indigenous) mediation.[iii]

The opening celebrations observed a number of Indigenous protocols, including a welcome to country from traditional custodians of the site of the IMA and smoking ceremony by the Yerongpan Aboriginal Dancers. The floor talk was a barefooted event, with audience members encouraged to make themselves comfortable on the floor. Artists introduced themselves through their lines of heritage, presented about their works in song, in their Indigenous languages, and shared sacred, familial and political stories.

The title for the exhibition is short-hand for the various migrations, trades and exchanges that connect peoples, particularly those driving displacement, diaspora and ecological devastation. 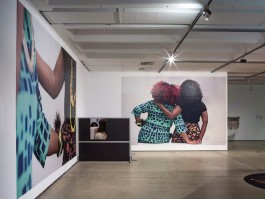 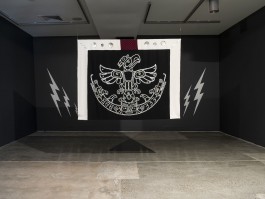 Foregrounding indigeneity highlights its presence across all choices made in the exhibition. For some of its curators, this unique spotlight is a chance to display work by a contemporary practitioner who speaks to their relationship with land amidst environmental threats. Ahilapalapa Rands’s Lift off 2018 is a three-channel video that literally cuts the high-powered telescopes off of the sacred summit of Mauna Kea, Hawai‘i’s tallest and most sacred volcano, and has them jump around to the hula beat of a Hawaiian ipu drum before exploding. In light of the 2014/15 Thirty-Metre Telescope protests surrounding even further developments at the summit, the video is a satisfying jaunt, affirming the power of hula in the face of colonialist adversity.

Bracken Hanuse Corlett is trained in art, carving and design of the Northwest Coast peoples of the area now known as British Columbia. His practice continues visual traditions and methods, at one point lost to his Wuikinuxv lineage, and fuses them with new media. Qvùtix (Dance blanket) 2018 depicts the artist’s family crest. Memory of the crest was lost to the Hanuse family in previous generations as a result of direct colonial interventions to eradicate the First Nations cultures during the nineteenth and twentieth centuries, but the artist has taken on the role of family researcher in order to create this meaningful image. Beyond simply an art context, the textile and its wearer are a living symbol of Indigenous resilience.

The Commute is also a time to hear from Indigenous people negotiating their lives in diaspora. Gunantuna artist Lisa Hilli’s installation, Sisterhood lifeline 2018, is dominated by two larger-than-life photographs of a pair of women of colour in the midst of a discreet gesture of comfort. These are accompanied by an office desk, complete with work chair, computer and partition walls. Post-it notes are stuck around the computer screen and they carry encouraging messages of affirmation. As the artist explained during the floor talk, the work is inspired by her real-life work struggles in Australia; an environment in which her cultural values and personal presentation go up against a white, male system. Her lifeline comes from connecting to her sisters—including those with similar marginalised backgrounds and identities—who can provide support and understanding in difficult times.

Objects like Sāmoan artist Chantal Fraser’s scaled-down wind turbine, The way 2018, offer a self-aware critique of the alien setting that is typical for Indigenous artists’ work within a gallery or museum setting. As curator Lana Lopesi writes in her exhibition text, ‘the shifting of environments for the wind turbine serves as a metaphor for the lack of context Indigenous art and artists often face when they are transplanted into environments where they become context-less.’[iv] Fraser’s work is purposefully impenetrable. At a little above head-height, it’s an odd encounter, and giving no further clues to its meaning or its connection to indigeneity in its layer of sparkly stick-on jewels. However, further looking into Fraser’s practice points toward her 2012 performance conducted in the San Gorgonio Pass Wind Farm in the Cahuilla lands of Southern California. The site provides a significant portion of energy to the region, but it is a massive, thousands-strong development built without permission on lands significant to the Indigenous population. It’s a one-way transaction in which the forced sacrifices of Indigenous people can be compared to the one-way fascination of Indigenous art and artefacts in a gallery and museum environment.

Wathaurung/Scottish artist Carol McGregor revives Aboriginal practices of possum skin cloak-making to communicate traditional applications of local flora and fauna. For her IMA commission, in consultation with and following the protocols of Indigenous people of the Greater Brisbane Area—including Turrbal, Yuggara, Quandamooka, Jinbara, Yugambeh and Gubbi Gubbi/Kabi Kabi peoples—McGregor has produced a grand piece of textile telling an impressive but often overlooked story of Indigenous ways of living off the land. 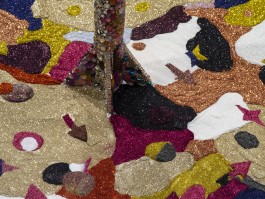 Similarly, T’uy’t’tanat-Cease Wyss engages with local Indigenous plant knowledge alongside her Sḵwx̱ wú7mesh and Stó:lō cultural knowledge to provide audiences with traditional medicines presented in a balm tin and tincture bottle. The items were displayed close to the exhibition’s reading room, a space featuring a wealth of literature on the subject of Pacific Rim Indigenous art and criticism, some floor seating and greetings in languages provided by the artists and curators.

…The Commute is still a Meanjin Brisbane landmark for Indigenous curatorial methodologies. Never before have such a diverse group of Indigenous people centred their own concerns and voices, from concept to outcome, by curating themselves. 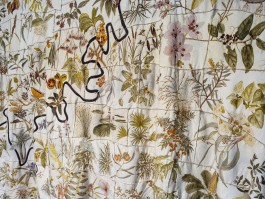 The Commute comes in a year particularly rich with critically acclaimed art moments by Indigenous artists in Meanjin Brisbane—including Ryan Presley’s Blood Money series; Archie Moore’s mid-career survey; and an ambitious media installation by Robert Andrew. Additionally, Blaklash Collective’s Maiwar program set a great precedent for all-women Indigenous initiatives. Significantly, The Commute opened a couple of months before and will coincide with this city’s highest profile exhibition series, The 9th Asia Pacific Triennial of Contemporary Art (APT9) at the Queensland Art Gallery | Gallery of Modern Art, with this coming iteration having the largest ever participation of Pacific, Indigenous and First Nations artists from across the region. But while the APT has crossovers with Hawai‘i, Tonga, Sāmoa, and Papua New Guinea, The Commute is still a Meanjin Brisbane landmark for Indigenous curatorial methodologies. Never before have such a diverse group of Indigenous people centred their own concerns and voices, from concept to outcome, by curating themselves.

In this way, the project bypasses the inherently white colonial systems typical of the art world (described by curator Lana Lopesi as ‘brown bodies in white boxes’ in a related public talk) to find a new model that facilitates and foregrounds the needs, values and protocols of diverse Indigenous art making and curatorial practices.[v] Importantly, it was very much a time for non-Indigenous audiences, including myself, to listen, wait our turn, and learn from sovereign perspectives.

[i] This essay will use both the Indigenous and English names for Meanjin Brisbane to honour the spirit of The Commute exhibition’s methodology. I also capitalise the term ‘Indigenous’ to acknowledge this usage in its curatorial writings, despite the current Australian convention to reserve its capitalisation for Indigenous people with ancestry in lands in Australia.

[iv] Lana Lopesi, One Directional Energy Transfer, Cultural Capital and the Indigenous Artist: On the work of Chantal Fraser, Institute of Modern Art, 2018

Emily Wakeling is Assistant Curator, Asian and Pacific Art, Queensland Art Gallery | Gallery of Modern Art. She lived and worked for several years in Tokyo, as an editor for Tokyo Art Beat and as an adjunct lecturer at Joshibi University of Art & Design and Kanagawa University. Emily’s curatorial projects are in collaboration with contemporary Japanese and Australian artists. Her art writing has been included in numerous art journals including Eyeline Contemporary Visual Arts, Art Monthly Australasia, ArtAsiaPacific and ArtReview Asia.

Review: The Commute at Institute of Modern Art

Emily Wakeling is Assistant Curator, Asian and Pacific Art, Queensland Art Gallery | Gallery of Modern Art. She lived and worked for several years in Tokyo, as an editor for Tokyo Art Beat and as an adjunct lecturer at Joshibi University of Art & Design and Kanagawa University. Emily’s curatorial projects are in collaboration with contemporary Japanese and Australian artists. Her art writing has been included in numerous art journals including Eyeline Contemporary Visual Arts, Art Monthly Australasia, ArtAsiaPacific and ArtReview Asia.