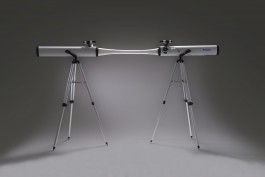 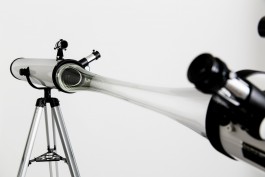 Jasmine Targett, What the eyes do not see, 2014. Detail from installation. 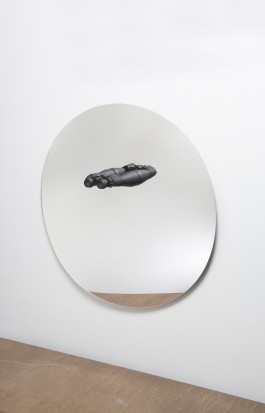 At night when I look through my telescope I often wonder could there be another person with a telescope looking back at me?’ I suffer from what 17th-century English philosopher Francis Bacon called ‘a mystified incomprehension that science alone cannot cure.’ When I think about observation I sense there is a greater connection between object and observer than my eyes can fathom.

The Entanglement Paradox has proven that the observer and subject become molecularly entangled during observation creating an osmotic transference of energy and information. This connection happens instantaneously at a minimum of over 10,000 times faster than the speed of light. Once separated the particles are described relative to one another, meaning that no matter how far apart in the universe, they are forever marked from their meeting.

These markers are present within every subatomic particle in the universe. They effortlessly create an unseen web of connections more tightly bound than the neural pathways of the brain, expanding knowledge by hardwiring consciousness to awareness. This democratization of connection suspends the laws between reason and knowledge that separate science and art in their pursuit of understanding the void between nature and existence.

Recently I have been inviting the idea that the art world is based on ‘an economy of belief’[1] into my arts practice. A belief that what is communicated visually has the potential to alter the way other systems of knowledge are perceived and understood. This creates a currency based on a conceptual capital that influences how the individual can contribute to the world in a way that is more conscious and meaningful.

I have been mindful of how Danish-Icelandic artist Olafur Eliasson approaches systems of knowledge surrounding art and science within his own practice, engaging the artist’s studio as scientific laboratory.

Eliasson talks about his installations as a machine that the viewer co-creates with, inviting them to become more conscious of their connection to the world through their surroundings. This is achieved through the machine’s ability to create an experience that encourages the viewer to simultaneously engage their senses while evaluating information gleaned through sensing.

“The way we sense is actually something we can evaluate… we can take in our surroundings but we can as we do that also be critical about how we do it. How do we take part in the world in a way that is both responsible but also has an impact on the world… how can I by looking at art for instance make sense? And isn’t that we what we essentially all want, just to make sense to some extent.”[2]

Within this frame work, ‘making sense’ is a pro-active idea that establishes that multifaceted systems of knowledge can be explored, interrogated and shifted through deeper observation.

This new paradigm has evoked a techno-romantic response within my practice to find a means to describe the osmotic transference of energy that happens during atmospheric observation. I have begun reinterpreting traditional craft materials and methods of working with glass, using the lens as a mirror to expand the parameters of perception. I have worked with scientific devices that magnify the natural world as a metaphor for contemplating the modern quest for vision and existential self-awareness.

In my latest work on perception, ‘What the eyes do not see’ and ‘Vision Quest’, visually explore how observation challenges the way we understand the world, and how thinking about observation changes what we see.

Within the installation ‘What the eyes do not see’, two ‘human size’ telescopes create a metaphor for two figures looking at one another. Their gaze is made visible by a hand blown glass component that tethers between the two scopes – expanding their lenses. The eye-piece of each telescope is mirrored so that as the viewer looks in they are pushed back out by the reflection of their own eye looking back at them. This work speaks to the idea that ‘as we look outward we also look inward.’

The second work is a response and a continuation of the first. ‘Vision Quest’, meditates on how ‘as I observe I become aware of the limitless potential of what is out there and of myself. Behind the surface of what I can see and beneath the surface of my skin I sense there is more than my eyes can comprehend on their own’.

Hovering in mid air, suspended by their seamless attachment to the mirror, the binoculars reference a figure searching beyond the surface. This explores the idea that by consciously looking outward you become your own satellite reflecting back detailed information from an expanded viewpoint about yourself, in the same way a camera is often referred to as a mirror with a memory[3].

As the viewer looks into the binoculars they are able to see inside of their own eyes. This visually references Krogh Jensen’s idea that –

‘In every observation there is a blind spot, the spot on the retina where the optical nerve is connected making the eye blind on that very spot, all one can do is try to move these blind spots, in an effort to catch a glimpse of the invisible’[4]

As I continue through my artistic practice to search for greater knowledge and understanding of the void between nature and existence, I am cognisant that what I am trying to achieve is the ability to fathom all of the stuff that you see when you close your eyes. In doing so, I am conscious of the role art plays in contributing to knowledge.

Art differs from the ever-present noise of mass visual culture through its ability to transmit cultural material from a shared aesthetic vocabulary in a way that is both lucid and meaningful. As a medium it sits at a distance observing. Like a satellite, storing information, becoming an ever-evolving museum that orbits the Earth, reflecting back information through which expanded knowledge is gained.

Jasmine Targett is an interdisciplinary artist whose practice aims to visually and conceptually investigate the ‘blind spots’ in perception surrounding nature and existence. Exploring the tension between awareness and visibility, her work is a ‘vision quest’, bringing into focus the unseen and overlooked. The central themes she interrogates include environment, atmosphere, science, philosophy, vision and perception.

A modern techno-romanticist, Jasmine reinterprets traditional craft materials and techniques working with new technologies to find innovative ways to respond to how climate science has changed the way nature is perceived and understood. Working with devices that magnify the natural world her work offers an expanded gaze into perception, making the void between existence and nature tangible.

There is a subversive undertone within her work that explores awe on a conceptual level. Her seemingly beautiful and intricately crafted works chart landmarks of anthropocentric disaster that cannot be found on any atlas or world map. These dark wonders of the natural world offer an insight into a ‘super ecology’ in which the natural and artificial have become inextricably linked within one natural system: An ecosystem of universal proportions from which no part is immune from the changes of its counterparts.

Jasmine is an Australian artist that was raised in New York and currently resides in Melbourne Australia. Her work was first recognised internationally when she was invited to exhibit in Wonderland held at the Museum of Contemporary Art in Taipei. Within Australia Jasmine’s innovative and conceptual work has been regarded for its cultural significance and awarded the Senini Prize from McClelland Gallery (2014) and LaTrobe Regional Gallery Acquisitive Art Prize (2009).

Over the past few years Jasmine’s research has received support from the Australia Council for the Arts and the City of Melbourne. Her work has been exhibited nationally at the National Gallery of Australia, the Art Gallery of Western Australia, Cairns Regional Gallery, Craft Victoria and Linden Centre for Contemporary Art. Jasmine Targett’s work is held in private and public collections throughout Australia, Asia and America.