THE MOMENT BEFORE YOU HIT THE GROUND

Swerve recklessly, choose irrelevant topics, work without ‘critical’ rigour: all of these actions can be considered as setting yourself up for failure. Failing, going the wrong way or getting lost can generate space for growth and astute critical reflection, especially with regard to art making and exhibiting. Sydney-based artist Jelena Telecki commented that “failure in one system might not be failure in another”[i] making the crucial point that what constitutes failure rests upon point of view and the parameters set around these judgements. Cultural theorist Stuart Hall has suggested that a view from below allows for the development of alternatives and ideas that do not fit neatly into existing structures. This performed criticality, that can occur when occupying the ‘unsuccessful’ position, allows greater freedom to explore ideas and concepts in depth. 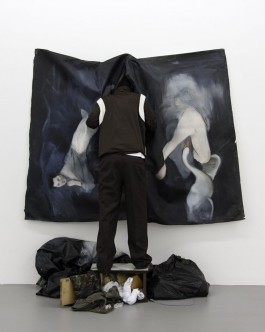 Failure and success traditionally sit in a binary and are unavoidably intertwined with financial gain, or not, of one kind or another. But success can indicate an adherence to a specific or defined set of expectations and systems, with this disciplinary correctness or critical rigour confirming what is already known according to approved methods of knowing. Operating from within these established systems cannot accommodate visionary insights and radical ideas in a way that deviating from this path, or failing, can.[ii]

For Jelena Telecki failure is a condition without confines, it is free space to imagine new ideas and possibilities; her concept of failure links inextricably with her concept of freedom. This unconstricted space allows an understanding of things as they are, in an essential way with nothing to lose, her aim becoming more focused. In a recent discussion with the artist, she questioned what failing as an artist might include: commercial failure and not making artwork sales is one form, but also a lack of symbolic approval from peers and society more broadly is another.

In the exhibition Piles at 55 Sydenham Rd in December, 2016, Telecki literally piled up her work in a corner of the gallery. Her canvases were placed haphazardly, some upside-down, stacked on top of one another. This installation came about due to the small amount of storage space available to the artist in her studio and the abundance of work she was creating. Through considering what to do with these completed and exhibited but unsold works she explored the limbo state that these artworks exist in, reflecting on the transformations that occur from artwork to rubbish and vice versa dependent on context. She incorporated the figure of Frank Sinatra into this installation as a celebration of these unsold paintings and an examination of commercial failure. The Sinatra figure’s arm and hand emerge from under a sheet as they hold up a top hat, the figure’s face obscured, as many of the faces in Telecki’s paintings are. Slumped and hidden, yet celebrating, this Frank Sinatra figure revels in a state of downfall.

Telecki’s work links failure or futility closely with humour, the artist attributes this to growing up in Serbia where a dark, cynical sense of humour is not uncommon. Growing up during the war in the former Yugoslavia was a very difficult time, but whenever the television was turned on the rhetoric that the Serbians were “special people” would spew forth while these special people were actually starving. The story of being special or God’s chosen people despite deep hardship is not unique to Serbia and is perhaps created in an attempt to help people cope under pressure. Telecki uses failure to play on this joke in her work suggesting the realisation that we may not be as special as we think we are. Through humour, empathy and an exploration of vulnerabilities Telecki considers her own weakness and failings, widening this out to consider the failings and patheticness of society more broadly, as we all try to present ourselves as special. This parallels art making, in that you may think you are really onto a special concept but later realise that it isn’t anything special, it is just another idea and that can be humorous. In her 2016 painting Gimp, the gimp stands in its inflated black PVC suit, with an inflated sense of self, but actually looks ridiculous in its desire to occupy this persona. 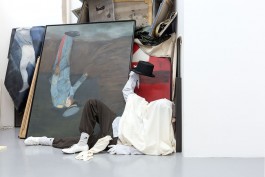 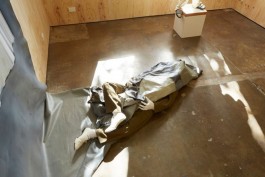 In the exhibitions Love is Gold at Station Gallery in October 2016 and Bubble Diagrams at Artspace in May 2017, Telecki created installations which feature a sculptural figure, this non-specific character changes between the various installations forming an extension of the figures portrayed in her painting but expanded out from the canvas. This character is often on its way down, slumped, flopped or falling with attempts made to prop it back up. In Art Lover (2016) this figure is slumped directly into the middle of a canvas as it hangs on the wall, its obscured face buried into the painting. Telecki recently said that “the moment you realise you have failed is the moment before you hit the ground”,[iii] this character’s torpor speaking potently of this moment of realisation, as it is slumping onto the floor, lying inactive or attempting to drag itself back up again.

The view from below that failure presents us with is a generative and critical position; as we fail we perform this analysis. Failing is an active state of being even if it is done while slumped on the floor. Failure, in its exclusion from established structures and systems has the potential to create something new, or to question these structures themselves, in a way that success from within the confines of these structures cannot accommodate. For Telecki failure creates free space for exploration and applies a humorous and critical point of view through which to create artwork.

[ii] Stuart Hall by way of Judith Halberstam’s discussion of his work in The Queer Art of Failure, 2011, Duke University Press.

Currently based in Sydney, Kathleen Linn is interested in how art and our lives intersect with critical theory and technology and is exploring how this can be conceptualised in text-based, performative and exhibition forms. She has written catalogues essays to accompany exhibitions at Seventh Gallery, Firstdraft, Interlude Gallery, Blindside and Kings Artist-Run. Her writing has appeared in Das Platforms, Terra Firma and Fine Print Magazine. She has participated in the safARI Explorer Writers (2016) program, NextWave festival (2016), and You Are Here festival (2017). She has curated exhibitions at Casula Powerhouse Art Centre in Sydney and ANCA in Canberra.