THE ECSTASY OF THE USELESS

Some objects cannot be held down by the categories through which we organise the material world. Some things resist definition; they are nebulous or confounding, they are without any direct utility, they are imitations of other things.

These are things that straddle lines and boundaries between different kinds of objects, different classes of thing and different and delineated categories of the ontological hierarchy of objects. They are poorer things, useless things, superfluous things. Yet they are things that also hold the potential to lapse between categories. They are objects that are wonderfully unspecific. 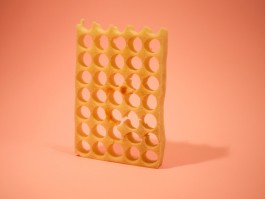 These objects were found outside.

They are fragmented,
misplaced,
strange,
unidentifiable and vague.

They exist in a / (slash) condition

These objects are parts of other things. They are fragments and bits of things that are no longer used and have been cast aside. Some of them are things that are broken or things which no longer do what are supposed to do. They are something else; abundant carriers with the potential for excess value, or perhaps just bits and pieces that have been left behind (junk).

They were collected and kept and then sat in box in the corner of a room while their fate was deliberated. They were taken out and paraded to friends who were impressed by their peculiar beauty. They were written about at 3am.

This is an attempt to order and examine these objects through categories that are overlooked or under examined, unspectacular or inconsequential, ambiguous and unspecific or difficult to pin down. They are things that look like one thing but also could be something else. It is an attempt to examine a new ontology – an outsider ontology – presenting objects that don’t fit neatly into any particular category of thing. 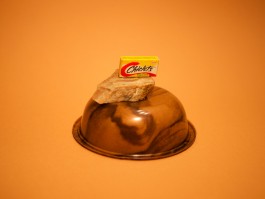 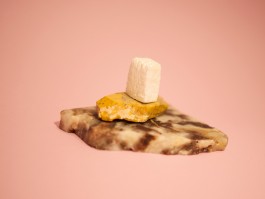 Some objects wear masks. Some objects parade as something they are not.
A fake wooden bowl or a fake branch that is bright green in the most unnatural way. Plastic that replicates marble or stone or wood.

These objects are poorer versions of the original. They are simulations of something real but are without the value or wonder of the things they copy.

On Rue Poulet in Paris women sell fake designer bags. I stopped to inspect the likeness one day but was interrupted by the arrival of a group of gendarmes. As the police approached the women, the bags were stealthily swept up in the sarongs used to display them. With arms full of counterfeit the hawkers charged down the street and vanished into nearby alleyways.

Fake Chanel is illegal in France.

Natural/unnatural, real/fake, valuable/valueless, legal/illegal;
objects that fall into the latter categories are banished to the shadows within a dominant ontological hierarchy. They are fakes, pretenders and simulations. They are false and unnatural. They became bad objects – illegal infiltrators into a system of value, utility and desire.

But the objects that I see on my screen possess a strange beauty. Their meaning is slippery and they refer to a number of familiar things while at the same time evading any specificity. They exist in what Avatal Ronnell describes as ‘the anxiety of non meaning’

. While it is their pretense that banishes them to the world of the outsider – the cheap imitation, the ‘bad’ object – it is this pretense that also lends them their wonder. 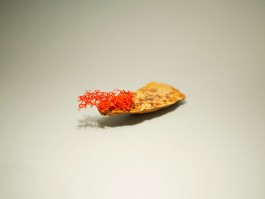 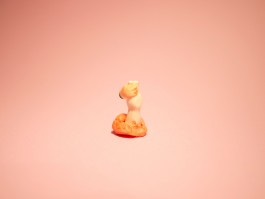 a mini packet of Crickets gum,

a tiny cube of styrofoam,

part of a broken porcelain figure
(an abstracted and disembodied porcelain hand).

These tiny things, innocuous and inconsequential as they may seem, possess anomalous and appealing aesthetic qualities. Tinted with soft pastels, the chewed gum is coated in a glittery, syrupy sheen. The styrofoam embodies an unnatural pearly whiteness. The porcelain hand, clutching onto what appears to be the remnants of a smooth and perfectly sculpted limb, is bathed in a milky white glaze and pastel hue.

These objects straddle the lines between beauty, confusion and, in certain cases, disgust. Some are picturesquely grotesque, much like one of those Baroque paintings of rotting still lives and half eaten fruits, dripping with juice and excess.

They also depict a certain enchantment with the small, mundane or useless object. As noted by theorist Sianne Ngai, this is a charm that has often been associated with the irrelevant. These indistinct and oddly appealing objects could be described by Ngai’s minor aesthetic category of cuteness. A category that embodies both aggression and tenderness towards its forms, the cute celebrates the diminutive, the small and the inconsequential. It describes objects with a ‘mereness at their core’

The spectrum of aggression and tenderness encapsulated by the cute is perhaps similar to the attraction and repulsion that I feel towards these objects. Perhaps this is partly due to what Ngai notes is our complicated relationship to things which exude cuteness, things which we view as subordinate and unthreatening. Things which we usually discard or overlook.

I am both disgusted and enticed by the glittering, sugary, saliva sheen (my own) encasing the gum. I am attracted, repelled and intrigued by the tiny severed porcelain limb. They are small and innocuous yet seem strangely alive. They are inexhaustible in their cuteness. 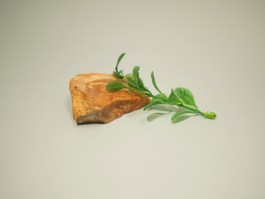 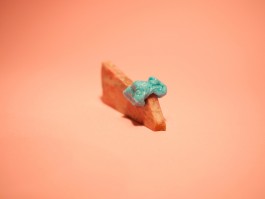 Debris // objects that are left behind

Generally speaking we throw away what is no longer of use to us.
Debris becomes useless.

But after they are abandoned, most objects do not disappear. In many cases they will outlive their makers. Plastic and chewing gum are not things that are easily disposed of.

Unnatural but still living (undead?)
These are things that still exist after we have disposed of them.
They become unwitting, unintentional relics; accidental artifacts that go un-revered.

Jean Baudrillard ponders the fate of such objects in his collection of fragments, Cool Memories III, noting that in the face of great beauty and wonder we are awe-struck and met with an indifference to all else. In this ecstatic state the encounter seems almost fateful, as if nothing else could reach such heights. He then wonders why the reverse isn’t true. When faced with the useless, the strange, the mundane, the small, the inconsequential, why do we not respond with the same sense of awe? With unfortunate defeat, Baudrillard resolves that there is ‘no ecstasy of the useless’

. But he does leave us with one parting thought, suggestive of the potential for wonder within the less miraculous object:

‘There should be a perfection of… the insignificant, the useless, the trivial and the banal, beyond which… there would be nothing more worth waiting for.’

Perhaps it is within this ontology of overlooked objects – an ontology of things which are outside – that the useless, small, fake, indefinable or cute objects find their perfection.

Jana Hawkins-Andersen is a Sydney based artist and writer.