This year marked thirty years of Transmediale, the premier festival of (post)digital culture and aesthetics held annually in Berlin at Haus der Kulturen der Welt and other venues. Founded as VideoFilmFest in 1988 to showcase a media format that had been phased out of the Berlin International Film Festival and poised at the cusp of the ‘digital revolution,’ the festival embraced developments and experiments in computer animation, multimedia, games and net-art to become a truly ‘transmedia’ event by the late 1990s.  My introduction to Transmediale came via my involvement in Electrofringe, an annual festival of emerging media arts which I co-directed in 2005 and 2006. Over these years both festivals exchanged screening programs and I attended Transmediale in 2006 to present on a panel and participate in an artist-run satellite project, Transit Lounge, a Berlin–Australia exchange. Which is to say, in the first decade of the World Wide Web, Transmediale was supportive of the kinds of independent experimental practices and networks proliferating with the onset of web-based culture. By then, Transmediale had expanded to include a music program, Club Transmediale, which is now run as a distinct yet interconnected festival, CTM, showcasing contemporary electronic and digital music alongside experimental sound and club cultures. As such, the first weekend in February has become a red letter date for media artists, technologists, theorists and enthusiasts from the world over to gather in Berlin.

Under the artistic direction of Kristoffer Gansing since 2012, the festival eschewed retrospection for its thirtieth edition. Instead, with an expanded program that ran over the entire month of February, this year’s Transmediale: Ever Elusive set out to mobilise ‘critical knowledge’ developed over the festival’s significant history to discuss the current elusive role of media in fostering and obscuring new forms of agency. In these discussions media is not simply a format, such as analogue video, but is understood as an ecology in which humanity is entangled; a nature-culture-technology assemblage, as Donna Haraway might say. This understanding accounts for the pervasiveness of media into life; not only as smart devices and social networks, but as automation, artificial intelligences and networked decision making processes, alongside forms of tracking and surveillance that shape contemporary realities. To paraphrase the late computer scientist and ‘father of ubiquitous computing’ Mark Weiser, cited in the festival exhibition ‘Alien Matter,’ these are technologies that disappear into the fabric of everyday life and become indistinguishable from it. 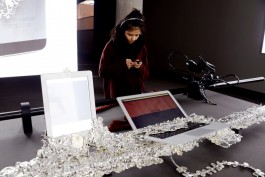 This year there was much discussion as to how we might form critical positions as subjects caught in the middle of nature-culture-technology relations; ‘no longer central but inbetween,’ as conference curator, Daphne Dragona explained. Indeed as new media scholar Richard Grusin noted in his keynote lecture that focused on the ‘never elusive’ US president Donald Trump, these concerns mark a shift from the escapism of early net culture — ‘escaping our meat bodies to jack-in to the digital matrix’ — to address the dystopian aspects of our current entanglements with media ecologies which require new forms of resistance. In her corresponding keynote lecture, media theorist Wendy Hui Kyong Chun argued that it is not what we say on media networks that count, but rather it is what we do. Given that user interfaces are designed to simplify, restrict and condition our behaviours, Chun claimed that it is on the level of habit that new forms of network politics must emerge. Prompted by the presence of several artists working with ritual, science and technology to produce unorthodox forms of knowledge, it is the connection between habit and ritual that I sought to address in this review. More precisely, how ritual driven acts of artistic-research and performance can be read as political activity or activism.

Johannes Paul Raether, who works with ritual as a form of research and critique, was a prominent figure at this year’s festival, delivering the last of the festival’s ‘keynote conversations,’ alongside Steve Kurtz of the Critical Art Ensemble. Raether conjures up a series of identities, witches actually, who appear in public to conduct research, teach and perform. The WorldWideWitches so far include ‘Transformella’, ‘Protektorama’, and ‘Schwarmweson,’  a series of ‘SelfSisters’ who co-exist as a ‘self-generating, irrationally meandering mythology.’ As illustrated on Raether’s website the witches produce a forking geneology named Identitecture. Each witch or ‘avatara’ hones in on a particular research topic, such as human reproduction industries, people’s obsessions with their smart phones and techno-dystopian theories of artificial intelligence and critical city-planning.

While the witches appear colourfully costumed and camp, by contrast Raether, a visiting Professor at the Kunstakadamie in Düsseldorf, delivered his keynote dressed in sober-toned urbanwear. Perhaps as a subversion of academic prose, Raether spoke with a peculiar terminology, peppered with neologisms that were simultaneously novel and obscure, to describe the ‘dialectical assemblage of the magical and the material’ that is at the core of this practice of ‘commoneering Witch-machines.’ 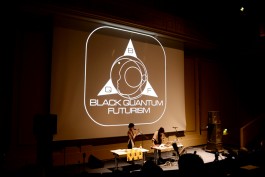 In the exhibition ‘Alien Matter’ curated by Inke Arns, Raether’s installation, Protekto.x.x. 5.5.5.1.pcp was a representation of an infamous performance-ritual DysTerb, NeoEuroGado PraYttLanth 5.5.5.1 – Infiltration der Rare Screen Halde, an unannounced intervention into Berlin’s Apple Store as part of the theatre festival Berliner Festspiele in July 2016, to produce a collective counter-fetish to our iPhone fetish. On a grey table matching the exact dimension of the store Raether had placed two rods, one made of carbon fibre the other from metal, lying parallel. Along the rods were mounted multiple headphone jacks which gallery patrons were able to plug into and listen to Protektorama XX’s account of the events. On small touch-screens released from their housing the witch appeared clad in braids, leather straps and a neck piece of gnarled selfie-sticks over a white lycra sports suit and full body paint of blue and pink. Protruding from one end of the carbon fibre rod is the only wholly intact iPhone, encased in a perspex box and held aloft on a selfie-stick. Presented onscreen was an image of Protektorama on the cover of a German tabloid with the headline ‘Was für ein Idiot (What an idiot)’ Along the metal rod an Apple iPad and AirBook are held in place with what appears to be an excess of hand-moulded metal. Indeed, listening to the playback one learns it is a soft rare-earth metal Gallium, commonly used in smart phones and which melts at the same temperature as the human body. It turns out that during this performance, participants had exchanged their smart phones with the witch for a small metal coin made of the soft metal which they were instructed to clutch in their hands. As they browsed the stores devices they called up the ritual website, which directed them to breathe in sync. As participants pressed down on the display tablets and laptops, the coins began to melt, dripping Gallium between their fingers and on to the devices and store furnishings. These acts triggered a security alert which quickly escalated into fears of a possible chemical attack. Protektorama XX and the participants were apprehended and isolated as police arrived to evacuate the store. As Raether emphasised in the keynote, the witches’ rituals don’t necessarily work but the coven nevertheless keeps doing them. While the German tabloids, and arguably much of the German public, consider Raether an idiot, during the keynote the artist revealed themselves to be anything but.

Another example of ritual as resistance was evident in the practices of Mother Moor and Rasheedah Phillips who comprise the Black Quantum Futurism (BQF) collective. BQF address notions of Black subjectivities formed in relation to time. Using sci-fi as strategy, they pick up on W.E.B. Du Bois’ concept of double consciousness; of African diaspora subjects inhabiting both African and Western/Colonial paradigms, and related it to space-time. That is, what it means for contemporary Black subjects to occupy different temporalities simultaneously, such as one governed by work and another aligned with ritual or tradition. Moore and Phillips draw on pre-colonial notions of space-time attuned to the recurring cycles of the sun and the seasons which they juxtaposed with the mechanisation of time via clocks, machines and schedules that shaped slave experiences. They argue that these technologies of control also gave rise to modes of resistance, such as working slowly to literally take one’s own time. By emphasising the multiple temporalities of Black experience rather the linear time of Western modernity, BQF effectively decolonise time. 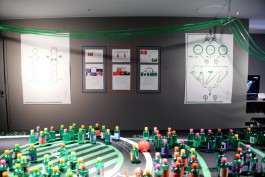 At the first of the expanded festival’s site specific ‘excursions,’ BQF performed Ritual Causality 003, a ninety minute audio-visual performance. Phillips delivered spoken-word text against an audio-video collage produced by Moor hunched over a mixer and numerous electronic boxes. Presented in the academic-historical surrounds of Langenbeck-Virchow-Haus at Berlin’s prestigious Humbolt University, the durational piece could be read as a kind of performative lecture. However, rather than present a conventionally argued thesis, this was a lecture as expanded cinema; as a live collage of affects, loops and dissonance. Ritualistically, I understood it as an affirmation of Black history being re-inscribed into contemporary Black lives.

Afrofuturist scholar Kodwo Eshun (n.d.) has argued that the middle passage rendered African diaspora knowledge as immaterial and immediate, as all material traces of culture were left behind in ruins. Thus, what remained was what people carried with them in their minds. As an oral culture, it is (ritual) performance that rematerialises it, conjures it into being and thus makes it knowable. What is it then to perform the (ephemeral) material archive of Black thought? As journalist Michael McCanne (2016) has noted about BQF, the function of the (quantum) Black archive is not to preserve the present, but is rather to alter its course.

With an expansive program of panels, keynotes, conversations, screenings, studio sessions, performances, workshops and excursions alongside an exhibition and a temporary library, it is impossible to summarise or even produce an accurate overview of this thirtieth edition of Transmediale. Thankfully, recordings of the sessions are being published online. Undoubtably some, such as the Xenopolitics: Petro-bodies and Geopolitics of Hormones ritual workshops convened by the investigative laboratory and tactical theater group Aliens in Green, will remain tantalisingly elusive, with only the remnants on view as an installation. Alongside the artists discussed above, these practices take unorthodox approaches to research, meaning-making and ways of being in the pursuit of obscure, indeed occult knowledges. They can be read as interventions into current media ecologies shaped by the interests of the despots, billionaires and captains of industry who effectively rule our lives; no longer emancipatory but abductive and predatory.