As I walk into Bay 12 at Carriageworks, I see dancer and choreographer Angela Goh standing in the centre of the well-lit space. With the space prepared for the performance to come –  on the white floor props are placed around the room – Goh acknowledges those that enter and smiles at familiar faces. Part of Liveworks Festival of Experimental Art, this is the premiere of Goh’s new work Uncanny Valley Girl in her hometown of Sydney and there’s a strong sense of familiarity between Goh and her audience. Once the audience is settled, this disappears. Goh stares directly towards the audience, but not at the crowd assembled in front of her. Any sense of mutual connection is lost, and Goh has assumed the persona she will inhabit for the rest of the hour-long performance.

Laid out on stage are a number of robotic and digital objects, including two TVs, massage devices and various items of clothing. During Uncanny Valley Girl, Goh interacts with these objects one by one, and while manipulating them, the machines seem to take on a life of their own, throwing questions of agency into flux. In one of the earliest moments, when a remotely operated wind machine pushes a shirt towards Goh, which she then picks up and wears, the actions of the machine structures Goh’s own movements. Watching Goh place silicone patches over a massage device, the machines now have a fleshy physicality of their own. In contrast, Goh manipulates her own body through jerky movements that are reminiscent of anthropomorphic robots. As I see Goh create characters out of machines, her own body merges with the figure of the fembot. 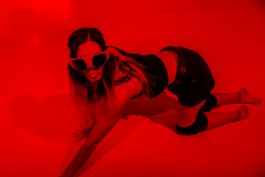 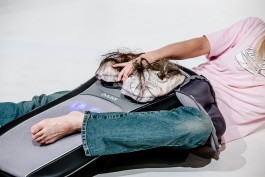 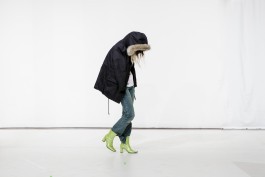 Goh’s own movements continue to allude to how the body has become understood as a mechanical instrument. In one moment, while sitting on the floor, Goh rotates slowly, seemingly without employing her limbs. In another, after shrouding herself in a parka lined with fake fur, Goh’s torso emerges out from underneath it, through what appears to be no force of her own. The discipline that Goh demonstrates over her body highlights how in dance and choreography the body is often conceptualised as a machine, to be controlled and directed for the benefit of the audience. Limbs become manipulators, broken down into their constituent joints and lengths, with their extensions and flexibility measureable and diagrammed. As the performance crescendos towards a climax, the relationship between body and machine only becomes more intertwined. As the lights now dimmed, Goh places a strobe light at the front of the stage, and pirouettes in front of it. Goh’s body is only momentarily illuminated by the flash of the strobe. The uninterrupted view of the performance is the silhouette projected onto the bare concrete back wall of the space: body and machine united in one image.

It is not only in Goh’s movements that such an inseparable connection between body and machine, and the question of the presence or absence of the self, can be seen on stage. The elements that construct the work, from text to soundscape, return to this core question. At key points during the performance, I am reminded that there is a particular body that is always the focus of this connection. With Rihanna’s ‘Needed Me’ looped as the audience enters, only for the vocals to be blasted from the track in Corin Ileto’s reprisal of the same track at the end of the performance, it is a woman’s body that is always required for technological developments, yet the female presence is subsequently elided. While the female voice that reads the text of collaborator Holly Childs on screen at the finale of the performance ties this relationship between gender and technology to developments in twenty-first century computing, the accompanying artist statement historicises these connections. The statement notes, “Weaving, looms, switchboard operation, hardware assembly lines – woman and machine have always been closely intertwined.” This formulation is even further developed in the work of Silvia Federici, who argues that the process of capital accumulation, which led to modern capitalism, “required the transformation of the body into a work-machine, and the subjugation of women to the reproduction of the workforce.”[i] While at that historical moment this process involved the destruction of the power of women over their own bodies so that reproduction could be enforced, in the machines that Goh has assembled for Uncanny Valley Girl, which have greater ties to pleasure, we can see how in the present women have been stripped of their power over their bodies so that pleasure can be controlled.

It is this question of power and control that animates the more visually arresting moments of Uncanny Valley Girl. While Goh often seems to focus on the perceived humanity of the machines, their rotating eyes and pleasureability, during a sequence where Goh uses an extension cord as a lasso, to the impactful soundtrack of Ileto, it is clear that Goh and her creative team remain in full control.

As part of an oeuvre of work, along with Body Loss and Desert Body Creep, Uncanny Valley Girl is the latest in Goh’s works that lead audiences to question how gendered technology reflects and reinforces social conceptions of gender roles. In a post-show discussion, another audience member highlights that the music played when a female dancer appears on screen during an interlude of Uncanny Valley Girl is the same as what is played during the dance scene of Ex Machina, where robotic servant Kyoko dances with villain Nathan Bateman. Combining visions of pleasure, subjugation and artifice, Uncanny Valley Girl presents a world in which gender has structured not only the human world, but the robotic one created in its likeness.

[i] Federici, Silvia, Caliban and The Witch: Women, The Body and Primitive Accumulation, Autonomedia 2014, p. 63 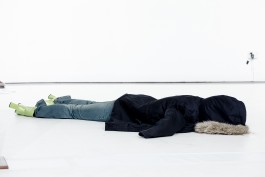