Kudos Live Vol. 3: Dual Existence was presented at Kudos Gallery on 5 June 2018. The event featured performances by Loc Nguyen, Eugene Choi, Get to Work, Ella Byrne, and Amy Claire Isabelle and was curated by Kate Stodart.

A trio of women donning hot pink wings, embellished overalls and shiny accessories command the entrance to the exhibition Kudos Live Vol 3: Dual Existence. An autograph signing table complete with photographs and markers sits to my immediate left, whilst a tripod facing two photo booths fringed with translucent fabric is installed to my right. These objects are yet to be used, but they prepare me for when I meet the gaze of an assistant who reaches out to me, clipboard in hand, asking: “Are you willing to be a participant?”. In this immersive performance, audience members are guided to pose for a photo with life-size cardboard cut-outs of the artist Amy Claire Isabelle dressed as ‘The Avon Lady,’ who assumes the role of a celebrity for the evening. Despite my initial hesitancy, I agree to have my photograph taken with a cut-out. Yet this simple gesture changes everything, as I move from being a passive spectator to becoming an active participant. I can no longer standby waiting for something to happen, instead I have become a functional part of the work’s existence. As ‘The Avon Lady’, Claire appears as both artist and subject, simultaneously moving amongst us, through the gallery, and as a figure on display. And now it seems, I too have assumed dual identities, becoming both an onlooker and a participant. The performance has begun. 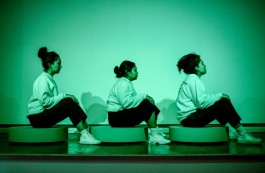 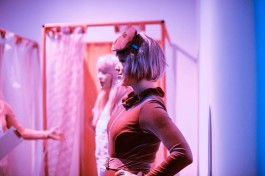 Interrupting the upbeat music and conversational chatter, Stodart’s announcement of Loc Nguyen’s performance draws the audience’s attention to the centre of the gallery. Embodying an intersection of the human and the cyborg, he walks into the centre of the room, bare skinned, wearing white-out contact lenses, pale underwear and a medical tube that wraps around his neck and travels down to his waist. Crouched on the cold floor, Nguyen awaits as a slimy corn-starch mixture is poured over his head. As the goo descends over his body and seeps onto the floor, a soundtrack of phonetic gargling gradually builds before he emerges from the wet placenta. Here, we watch the artist being born – a process that sees Nguyen stretching and crawling, contorting his arms and commanding the space, in a simultaneously fluid yet fragmented motion.

The body is an inherently readable, coded subject in performative acts whereby dress, movements and skin are signals of racial and sexual identity. In a state of becoming and forming, Nguyen works with this readability in queering his movements through a subtle nod to Vogue dance – performing as much for himself as he is for us. For me, this signals an experimentation with queerness; a tense mediation on body politics; and an employing of cyborg aesthetics as a way to realise queer potentialities. The climax of the performance doubles as the finish, as his movements collapse and he rushes to remove the medical tube from his body. What once appeared to give him life, now suffocates him. The only physical traces of the performance that remain is the torn tube, wet sheet carcass and a single cautionary wet floor sign. I feel the slimy residue on the floor to find that it has hardened; yet it remains malleable – leaving a seductive trace of the previous movements. 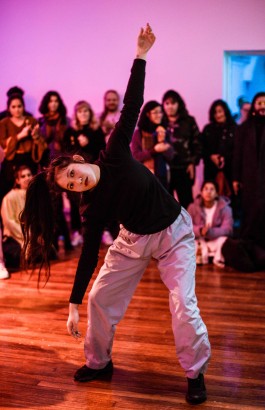 It is here that the tension behind the exhibition reveals itself. As performances are inherently live acts, they always require a consideration of duration, embodiment, space, and audience. As a product of these gestures, the work can only truly ever be experienced in the present moment. In this context, documentation serves as a tool of the work’s afterlife and futurity as it manifests through traces that lack completeness. This is echoed through the photographic aspect of Isabelle’s work which creates a visual record of the audience’s participation, as well as in the remaining corn-starch ashes from Nguyen’s performance. However, these documents are treated entirely different as the former is framed and put on a wall, whilst the latter is simply mopped up. In this way, documentation is not only a record, marker or trace of what happened, but also an active continuation of the work itself. Dual Existence approaches performative works in this way, ushering an investigation into how documentation and memory are contestable sites within themselves. No longer is documentation merely a mnemonic device or product of performance, it has become symbiotic with the performative act.

As the momentary chatter leftover from Nguyen’s performance comes to a halt, the sound of Aaliyah’s ‘Rock the Boat’ signals the beginning of another performance. I watch as Eugene Choi warms up her body, firstly moving between controlled, rehearsed, repetitive movements, before interjecting this calmness with an uncontrolled fastness, before abruptly switching back again. There is a fluidity throughout the choreography, mediating her movements in relation to the space she occupies, and the objects and the people which surround her. We are made a part of the performance as much as we are watching it unfold. After a few minutes, her movements come to a pause – holding a lumber pose for a brief moment leading everyone, including myself, to think that the performance has ended. However, before the audience’s applause becomes too loud, Choi breaks the fourth wall and declares to the crowd “I’m going for two hours”. Though many people initially laugh, there is an awkwardness that accompanies returning back to conversational chatter and reinstating normalcy into the space.

Throughout the evening, Choi continues to make use of the entire gallery space: running, crawling and interacting directly with audience members. These actions, though appearing at times unrelated and improvised due to their fragmented physicality, seem second nature to Choi. A singular sheet of paper blending into the wall details a list of every performance Choi can remember performing (off the top of her head). Though the list is dense, it remains incomplete and serves as the reference point for her actions. In a process of constructing and deconstructing her movements, Choi creates a live assemblage of all these performances, remixing and combining them through memory. The performance is in fact multiple (re)performances that results in Choi embodying a living document, where memory is both the source and thread that produces the live act.

At any given moment during Dual Existence, multiple things compete for both my attention and the gallery space. As corn-starch lies drying across the floor, Choi travels through the gallery whilst Isabelle and her assistants sign autographs at the front table and photos are taken with the Avon Lady. Amongst these overlapping performances, Get to Work (Georgia Taia, Tracy Quan, and Paris Taia) enter onto the green-lit stage, each member taking a seat on top of circular plinths. Elevated above us, GTW occupies the most assertive focal point of the evening, as they sit stationary and composed with their hands resting on their knees. And, in a space that is over-activated, their stillness demands my attention. Pivoting every few minutes counter-clockwise, they maintain their “picture perfect” composure within the postcard-like framing of the gallery stage. In this rehearsed stillness, GTW confront the history of colonial documentation by making explicit its affiliation with racial profiling and stereotyping. Referencing the style of ethnographic portraits taken in the Pacific, GTW appropriates the photographic process as a way of reclaiming space. Here, their autonomy is paramount. Only now, at this stage of the night do I feel like an important dialogue around documentation, performance and identity can begin as these aspects ironically become more potent when being subverted and interrogated. 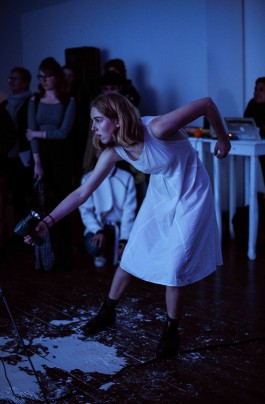 Soon after GTW vacates the stage, Ella Byrne faces a tripod installed on top of the dispersed corn-starch remains. I watch Byrne as she watches her digital image form on the wall in front of her, simultaneously creating and filming herself as she gently moves in front of the camera. Pairing these visuals with the robotic soundtrack overlay that resembles a friendly text to speech convertor, Byrne dives into a real-time digital landscape where the self is pluralised. Byrne exists in a liminal in-between state, occupying past, present and future modes of being all at once. This cross-section allows for several modes of viewing as her digital-self renders and duplicates, building a sea of pixels and digital fragments. As my focus switches between her physical and digital presence, the distance between performance and documentation increasingly blurs as they become inseparable.

By chance, I exit the event similarly to how I entered it, with another pink-wigged assistant taking my hand and leading me to have my photograph taken again. The night has come full circle, however, I cannot not help but feel as though something is missing. Dual Existence has undoubtedly presented a wide ranging exploration of performance and documentation, but perhaps not in the way that curator Kate Stodart intended, as the conceptual scope of the exhibition proves at times to be competitive and convoluted. Perhaps it is due to the ephemerality of performance that this sense of something missing is inherent – one last testament to the malleable nature of memory and documentation at large.

June Miskell is a Sydney-based writer currently enrolled at UNSW Art & Design. This essay has been supported by the Emerging Critic Award 2018 presented in partnership with Kudos Gallery and Runway, sponsored by Art & Design Student Council.

Kudos Live Vol. 3: Dual Existence was presented at Kudos Gallery on 5 June 2018. The event featured performances by Loc Nguyen, Eugene Choi, Get to Work, Ella Byrne, and Amy Claire Isabelle and was curated by Kate Stodart.

June Miskell is a Sydney-based writer currently enrolled at UNSW Art & Design. This essay has been supported by the Emerging Critic Award 2018 presented in partnership with Kudos Gallery and Runway, sponsored by Art & Design Student Council.