Review: Infinity Minus One by Su Wen-Chi at Liveworks 2018

How do we fathom something as mammoth as infinity? How do we compare our own constructed numerical system of mathematics against a forever? How do we then remove a finite amount, an amount we have constructed called one, from this abstract concept of the infinite? What remains?

Physicists and mathematicians have debated over the concept of infinity minus one, with many concluding that the result remains as infinity as infinity cannot be limited or even measured. After all, what is one particle against the entire cosmos of the universe?

It is these questions that Su Wen-Chi’s performance Infinity Minus One tackles as part of Liveworks Festival of Experimental Art 2018 at Carriageworks. Like questions of the universe, the work is characterised by speculation, ambivalence, a sense of the vastness of what is unknown and inexplicable and the darkness that is infinity. A result of Wen-Chi’s 2016 artist residency at CERN (The European Organisation for Nuclear Research) in Switzerland in 2016, Infinity Minus One imbricates art and science, too-oft regarded as separate and mutually exclusive disciplines. 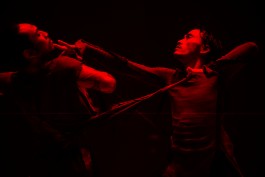 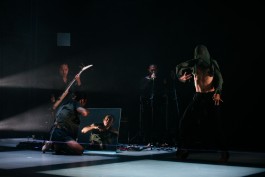 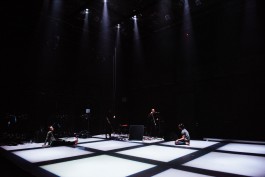 The performance begins when experimental duo Senyawa enter and start to play the instruments and equipment installed in the far left of the long rectangular stage. One part of the duo, Rully Shabara, creates an impressive soundscape simply using his voice, a microphone and a loop. His deep intonations envelop the audience and the waves of his voice reverberate through the space, creating an other-worldly soundscape. Shabara rasps harshly creating what sounds like radio static. At other times, he growls, reminding us of the animalistic. Just within the first ten minutes, we are presented with an eerie palimpsest of contradictions. It is these paradoxes that the work operates on, deconstructing our ideas of binaries of past and future, technology and nature, particle and cosmos. Shabara’s contrapuntal harmonies seem to hint at our similarly contrapuntal existences and temporalities. Indeed, Su Wen-Chi seems to suggest that as we look to the future, we also look to the past and the present as they are all collapsed. Infinity Minus One challenges our mainstream (and Western) perceptions of time and the future as something to look forward to.

Indeed, I initially found myself rather erroneously looking for a teleological understanding of time as two dancers, Danang Pamungkas and Luluk Ari Prasetyo, enter the stage. They sit languidly in front of the two musicians, with their backs to the audience. Eventually, they rise, shifting from pose to pose in time with the music created by Shabara’s voice and Wukir Suryadi’s handcrafted ‘Bamboo Spear’, a stem of bamboo strung with strips of animal skin and steel strings. As they move with the beat, their movements are calculated and sharp, settling into new and disparate poses. At times, their stances are reminiscent of traditional martial arts, with fists at their side and their feet shoulder-length apart. At other moments, their articulated movements are reminiscent of Javanese traditional dance, characterised by intricate gestures of fingers and complicated footwork. Recurring poses are connotative of signs of religious worship as they pose with arms to the sky, or huddled on the floor bowing to some unseen presence. These poses may seem incongruous in the secular world of ‘technology’ and ‘science’ so removed from the past and tradition. Similarly, Suryadi’s ‘Bamboo Spear’ instrument which combines traditional Indonesian instruments with the sounds of guitar distortions is also discordant. Yet they are only incongruous in a linear, unchanging understanding of human progression, time and the universe at large.

Instead, recently physicists and philosophers, like theoretical physicist Carlo Rovelli, have argued that time, and the present, in universal terms is not thin, but rather “horrendously thick” and elastic.[1] Philosophers like Dr Bradford Skow have asserted that the present is not a singular frozen moment in time, but rather that we exist in a “temporally scattered” condition, perhaps dramatised in Su Wen-Chi’s eclectic range of movements.[2] Religion, art and science are after all, part of the universe’s biggest mysteries, and may be seen as attempts to understand human place and existence in the cosmos. Conversely, they continuously reveal our own ignorance to the unfathomable unknown. 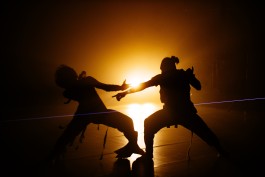 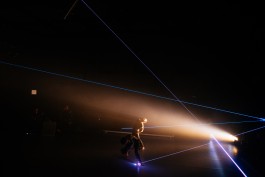 As Pamungkas and Ari Prasetyo dance in tandem with the music, it is implied that they themselves are two particles. At first they pose separately with no interaction or acknowledgement of the other. When they do eventually interact,  there are moments of an oppositional ‘push and pull’, with one performer contorting backwards, whilst the other pushes forward. These moments of synchronicity imitate the behaviour of molecular particles, bringing the human body in dialogue with technological innovation and the abstraction of physics.

This is further exemplified also by the use of lasers that emulate the behaviour of cosmic rays, which are atom fragments and high energy particles that rain down onto the earth from outside our solar system. Cosmic rays are one of our few direct samples of matter from outside the solar system. They continue to somewhat confound scientists as their source of origin remains unknown and their pathways are completely unpredictable. The movement of the laser rays are similarly erratic. Travelling at the speed of light, these rays are a natural phenomenon that humans have attempted to theorise and rationalise but continue to lie outside the realm of human understanding. Indeed, the laser rays themselves belie a logical sense of place and space. When the rays seem to be sweeping backwards, away from the audience, it is revealed that they are in fact, moving upwards towards the ceiling, confounding our sense of dimension and distance.

These rays create intersect with one another using small mirrors installed around the theatre. At one point, they create a grid, suggestive of the scientific devices used to detect cosmic rays. Whilst this grid symbolises technical innovation, the two dancers continue to dance, asking us what happens the corporeal, to the human physical body in the future? In a future bespotted with speculations of the ‘post-human’, the ‘post-contemporary,’ what place will the material human body, the performing body have?

Whilst Infinity Minus One may presuppose at least a layman’s understanding of physics, it is not necessary. A sense of wonder is still conveyed by the complex conversations created between light, music, and the performers. Whilst Su Wen-Chi’s exploration of the ‘universe’ remains vague, perhaps this perplexity is inevitable and is a confusion that can only accompany some of science’s biggest questions.

Infinity minus one is still infinity. However, the equation itself is void and in fact does not have meaning as infinity is not a number. Instead, it is revealed that numbers are modicums of sense rendered  incommensurable when confronted with the entirety of our vast quantum world.

Infinity is not defined, and neither is Su Wen-Chi’s performance. 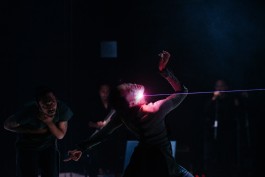 Soo-Min Shim is finishing her Bachelor of Art History and Theory (Honours) at the University of Sydney and is a freelance Art writer based in Sydney.

Review: Infinity Minus One by Su Wen-Chi at Liveworks 2018

Soo-Min Shim is finishing her Bachelor of Art History and Theory (Honours) at the University of Sydney and is a freelance Art writer based in Sydney.