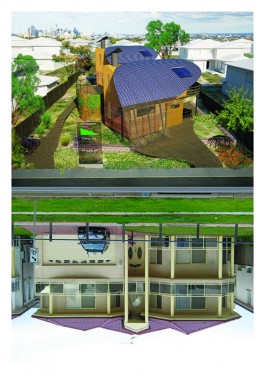 “McMansions are the peculiar artifact of a specific economic model of developer-driven land subdivision and speculative housing. They tell us about the failure of the planning profession and governing authorities to control the excesses of such self-interested land planning practices. They tell us about the failure of the architectural profession to increase public knowledge and expectations about what buildings can actually do, and to make good design accessible to everyone. But they also tell us about human aspirations, the desire for status and identity, the power of a constructed image of ‘home’ in the popular imagination. The McMansion is a fascinating social, anthropological and political document.” 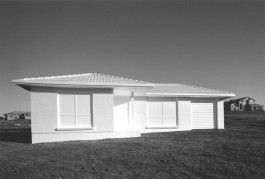 Frontier is a full-scale house made from polystyrene, constructed in the Blair Athol Neighbourhood development just outside Campbelltown in New South Wales. Frontier was a work about a present without a past, about the phenomenon of whole neighbourhoods being created in a year or two⎯neighbourhoods and communities that do not have a communal history or past. Frontier and the Reincarnated McMansion project are bookends to a set of ideas, concerns and creative processes spanning my 14 years’ as a practicing artist and graduate architect.

The Reincarnated McMansion project proposes to audit, dismantle and rebuild a single McMansion dwelling. An unsustainable large home will be reincarnated onsite into 2-3 best practice, zero emission smaller green homes using the existing McMansion building materials and introduced sustainable products. We seek to emphasise both the project’s quantitative architectural and environmental values as well as its symbolic and cultural significance as a work of art. 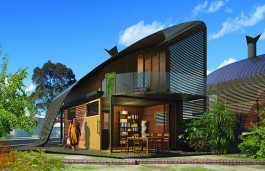 The internal spaces have been designed to be adaptable for future changes.

The building’s principle materials are recycled. The ground-floor’s walls are the from the original McMansion bricks, tiles and concert slab (formed into a rammed earth (pise) like walls). The first floor is made from recycled wood (sourced from the recycled McMansion) and responsibility sourced timber.

The site has a street front display that communicates the building’s real time energy performance to the neighborhood.

The roof has strategically designed eaves for full summer sun shading (of the building mass) and winter sun penetration (into living spaces).

60,000 litre water tank is integrated into the overall plan and circulation program and doubles as first floor communal deck.

Orientation of the building’s roofs is to the north so as to optimise solar harvestin.

The original McMansion footings are retained at ground level as a cultural reference point Garden features wide selection of edible and native plants.

Australia’s new and existing housing landscape demonstrates a remarkable cultural homogeneity; it is dominated by brick veneer, terracotta tile roofed houses, which often have concrete slab foundations. This building model, which is found in arid central Australia, the cold highlands area, the tropical North and along the densely populated coastal suburbs, is not sensitive or adaptive to its immediate environmental conditions–it is essentially climate rejecting. It is a model which, at its worst, relies on active, energy-consuming, greenhouse gas producing air conditioners and heaters to maintain acceptable levels of comfort for its occupants. The McMansion⎯ defined as a project home exceeding 400sqm⎯is the ‘Up-Sized’ version of this model .

In our discussions with developers, urban planners, architects and homeowners, the question of what to do with Australia’s vast car-dependent suburbs, built during a short period of cheap energy and cheap raw materials in the second half of the 20th Century, has been asked time and again. The 150-170 000 new houses built each year1, now employing an increasing number of sustainable design principles, do not address the remaining sprawl of oversized, poorly built, mechanically cooled and heated housing stock that makes up the remaining urban landscape.

In the last few years soaring oil and commodity prices, the worst drought on record, the Garnaut Climate Change Review and the introduction of a carbon tax in Australia in 2012 (and its planned removal by the Abbott government), all signal new economic, environmental and social paradigms within which housing development will be conceived, evaluated and built. In 2008 a single recycled brick is valued at 10% less than a new brick, whereas its reuse represents an 86% reduction in energy consumption.2 In five or ten years’ time, the new brick will not only be manufactured and transported using energy that is potentially four times as expensive (petrol recently predicted by the CSIRO to reach $8/litre by 2020)3, but it is also possible that fuel will also be taxed under a carbon tax scheme. The recycled brick on the other hand, will earn its user carbon credits, increasing its value.

The Reincarnated McMansion project seeks to act as a catalyst for a new, greener and more sustainable approach to suburban redevelopment that goes beyond the existing unsustainable practice of knocking down existing housing, down-cycling some materials and sending the majority to landfill, and rebuilding with all new materials. In a potential ‘carbon tax’ economy, the Reincarnated McMansion model will let developers continue to do what they do best: build homes, add value to land and exploit existing resources. By value-adding to the vast material stockpiles (poorly designed homes) ready for demolition and re-use onsite in the suburbs, developers, will be able to claim and trade carbon credits and reduce infrastructure costs through increased urban densification.

Mathieu Gallois graduated from the Institute of the Arts, Australian National University, in 1996. He has exhibited both nationally and internationally, realising 20 solo shows and participating in over 30 group exhibitions. Gallois has received major grants from the Australia Council in 1999, 2003, 2007, 2009 and 2012. He has been selected for numerous national art awards, including the Inaugural National Sculpture Prize, National Gallery of Australia, ACT (2001), and The Helen Lempriere National Sculpture Award, Melbourne, for which he received a high commendation (2001), commendation (2003) and popular choice award (2003). In 2002 Gallois exhibited at the Australian Embassy Paris, France, and received a Samstag Scholarship, which enabled him to complete a Masters Degree at Goldsmiths College in London, UK, in 2003. In 2004, Gallois’ work was documented in Monument magazine in a feature review written by Jeff Gibson. In 2005, Gallois had a survey exhibition of his work at UTS gallery and exhibited twice at Sherman Galleries in Sydney.

Gallois completed a Bachelor of Arts in Architecture at the University of Technology Sydney in 2007, and launched the art/architecture project the Reincarnated McMansion project on ABC Radio National’s by Design program in 2008. In 2009, 1 house = 1000 homes was exhibited at Carriageworks and later at the McClelland Sculpture Survey & Award in 2010. The ‘Wellington’ projects were exhibited at Artspace Sydney and Western Plains Regional Centre, Dubbo in 2013, and will be shown at the Centre for Contemporary Photography, Melbourne, in 2014. In 2013, Gallois was awarded an Australian Postgraduate Award scholarship to undertake a Doctor of Philosophy at the College Of Fine Arts (UNSW).