In the centre of the floor, a projection of bubbling and frothing ocean washes over a circular disc of sand, fringed by banana palms. The body of my floating kaiviti sissy Jesswar wearing a black bikini top and boardies, peacefully drifts in and out of the scene. Pisces King (2018) by Wakka Wakka and Yargel artist Hannah Brontë presents an intimate portal into a queer love between the artist and her partner, and how gurrigang, or ocean, may be thought of as a shared site of healing. It is within this vast cosmological watery body where we can reconnect with the archive of our ancestral pasts, to articulate new presents and futures. In line with Brontë’s statement to the work, ‘we return to each other in waves, this is how water loves’, one may dream of such a world with no walls and only portals unto each-other, allowing us to situate and align ourselves together as Oceanic peoples, beyond a linear time-space continuum.

In its second iteration this year at Artspace on Gadigal land of the Eora Nations, Blak-Queer Futurism (2018) is an exhibition curated by Fijian Alec Reade and Pyemairrenner Kalyani Mumtaz. Uniting Pasifika and Indigenous artists in the port-city of Sydney is significant as the city is considered a primary vantage point of white settler colonialism unto the Greater Pacific. While the predominant narrative of Australia’s historical interaction with the Pacific is ‘shaped by networks of exploitation’ which are assumed to be a one-way colonial encounter, as the late Tracey Banivanua Mar (2015) argues, there has been series of subaltern webs of resistance that were ‘shadowing these imperial networks’ which has been unduly sidelined from the historical record. Assertions of a queer love from across Oceania in this space then, serves as yet another layer to the chorus of that resistance. 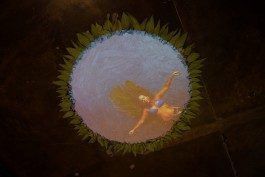 Upon the windows of the gallery, the face of Sian Vandermuelen, otherwise known as the eminent Samoan rapper, Miss Blanks looks outward onto the harbourside. In consideration of this frequently eclipsed regional history of First Nations resistance, Reade and Mumtaz challenges a hegemonic Western vision rooted in nationalistic frameworks which seeks to divide the peoples of these lands from those of the Pacific. Here, they call upon artists to resurrect this deeply entrenched historical and genealogical connection through blak and queer speculative multi-disciplinary arts ‘drawing upon resilience, knowledge, and spirituality’. This is predominately a response to dominant futurisms forecast by the Italian Futurists of the early 1900s, as well as, mainstream Western visual cultures of science fiction, both movements saturated by Whiteness, patriarchy, heteronormativity, among other things. Indebted to the foundational work of the Afro-futurist genre which has directly addressed the lack of representation of black bodies within visions of what constitutes future, the contributing artists use distinctly Oceanic and queer epistemologies, cosmologies, and lifeworlds, to re-consider their places in what is now known as Australia

The Narrm-based Pasifika Art Collective New Wayfinders video work tuku-na e liu (2018) explores queer ancestral belonging and ontologies to trouble a Western timescale which centres the individual and views the Past/Future as categorically distinct. Through performance of the spoken word, several members remind us that it is common as queer Pasifika peoples to be alienated from Australian mainstream cultures that do not seek to represent us visually, or obscure us through their imperial optics and stereotypes. Acknowledging a shared positionality as settlers to foreign lands, the artists reinstate solidarity across the new community they have seeded, as this collective growth has empowered them to re-establish their connections to a shared genealogical past through story-telling and speculate how this may cyclically manifest in futures which are emancipating, multiple and diverse.

Futures in the plural are visualised across all of the artists works. In Filipinx Bhenji Ra’s digital print anito/all idols (2017), ‘a new icon, an initiation into a new body’ is envisioned as she kneels upon the lip of a rock as a waterfall cascades behind her, with the chromed fertility symbol of lingling-o hovers overhead. Marked with iconography of her New York vogue family’s House of Juicy Couture and Baby Phat’s Kimora Lee Simmons, while cradling fish and centipede, Ra acknowledges her respective mothers in her life (chosen, from popular culture, ancestral) , while also giving herself as offering to an unparalleled queer and cross-oceanic diasporic ecosystem of love and mutual care by way of prophecy. Similar to Brontë, connections to waters signal the latticed and complex trajectories of Oceanic peoples and underlines their shared similarities in geopalagic relation. 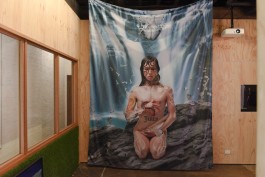 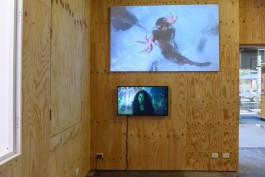 By the same token, the Aotearoa-based Akashi’s video work B14CK 2H4K71 (2017) heralds homage to feminine energies to all the ‘muvahs, daughtahs, sissys and cyber mentors’ across family and community, as well as, the Tongan goddess of the world Hikule’o. Akashi, her twin sibling Paula Fisiinaua, and performance artist Jahra Wasasala suspend themselves underwater in a backyard pool reminiscent of a watery womb of origin and explore convent. In the collaborative photo set I MALIE I TAI, I MALIE I UTA, I MALIE I LALO (2017) by Jermaine Dean presents the scorched face of the Samoan artist Rosanna Raymond within a ring of shark-teeth and a grass head-dress provide a vignette into the monstrous and dystopic vision of Oceanic futures. As our ancestors may have been mutilated by the forces of colonialism, we can use our strength in this mutation. Finally, Be Kind to Yourself  (2017) by Kalyani Mumtaz of Willow Beats depicts the artists gradual decomposition of her body into country. Pasts and Futures recycle and regenerate through land. Overall, Blak-Queer Futurism (2018) illuminates budding dialogues across diasporic and indigenous First Nations peoples and add an important layer to our collective construction of ourselves as both sovereign and autonomous. These artists’ nurturing of deep pasts offers mnemonic portals beyond the limitations of these times, to cyclically reclaim the deep futures in their multiplicities, that are owed.

Talei Luscia is a Fijian academic, poet and DJ.

Talei Luscia is a Fijian academic, poet and DJ.