When I spoke with Beth Dillon in October 2016, she had been chasing winter for years. It pervaded her videos, collaborations, textiles and characters through icy backdrops, outfits hand-made for cold climates and aspirations of reaching snowy summits. The discomfort of unknown places can breed new ideas, and as Dillon explained, ‘limitations are always interesting to work within’. We speak again in July 2017, in the midst of her first full summer in years. She is making the most of the t-shirt weather, having just walked most of the 500km distance between Geneva to Paris, where she has started a three-month residency in the UNSW Postgraduate studio at the Cité Internationale des Arts.

I ask her why she walked, and Dillon explains that having moved cities every few weeks for many months prior, she wanted to slow down and prepare herself to settle in Paris. Also, if the peripatetic philosopher Jean-Jacques Rousseau could walk Geneva to Paris, so could she. A pilgrimage of sorts (the path actually joins up with the Camino de Santiago pilgrim route), the trail passes through picturesque mountain villages, farmland and industrial areas. At the end of each day, Dillon shot one 35mm frame towards Geneva, and another in the direction of Paris; she also collected nettles from the roadside, which she plans to process into fabric. She doesn’t say it outright, but as much as the walk provided time to re-set, it was also a form of research-based practice. When travel is slowed down, the route, as well as the destination, can provide opportunity for experimentation and reflection. Dillon arrived the day before starting an intensive, month-long course at the Philippe Gaulier clown school just south of Paris.

Originally from Sydney, Dillon departed Australia the day after graduating from the BFA Honours program at UNSW Art and Design in 2013 and headed to winter in Reykjavik, Iceland for the SIM Residency program. Over the last four years, she has been back and forth between Europe and Sydney, working on both solo projects and collaborations in Netherlands, Germany, Switzerland, Iceland and now France. She dismisses the romantic idea of the nomadic artist-traveller, describing her itinerary as mostly ‘low-budget relocations to B-side destinations’.

Whereas much current contemporary art discourse draws parallels between the world-citizen nomadism of artists and that of migrants or even refugees, Dillon sees more of a correlation in her own practice between the traveling artist and the tourist. She explains, ‘touristic encounters with the landscape and artistic research in the landscape often share very similar methodologies and produce similar images’. Both tourist and artist are in search of the sublime and the extraordinary, and tend to impose themselves on another’s land. Both seek enjoyment alongside productivity, documenting their adventures for distribution amongst friends and colleagues back home.

One of the first works I saw of Dillon’s was a series called Getting to Know You (2013). A collection of videos, described as ‘field studies’ and ‘athletic engagements’, see the artist running, rolling, dancing and jumping in the hot, dry, flat landscape of Fowlers Gap Research Station in far western New South Wales. Dressed in gym-class garb, Dillon undertakes these simple activities with earnestness bordering on absurdity. In Runway, Dillon appears over a distant horizon and runs towards the camera, arms out like wings. She holds handfuls of coloured balloons, released at the last moment so that they deflate, zipping upwards before torpedoing back to earth, technicolour skins. Other videos see her roll down a hill, dance with cheerleader streamers on a riverbank and hurdle over farm equipment. Rather than approach the unknown with fear, apprehension or capitulation, Dillon opts to play, guilelessly misinterpreting machinery and misreading landforms. Her use of bright fabric, balloons and streamers suggest a celebration, as if she is trying to commune with this impervious landscape in the same way one might greet a long-lost friend. As the title Getting to Know You suggests, it’s a process of mutual acquainting. 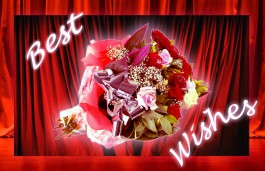 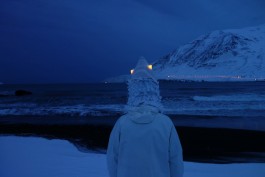 At the core of Dillon’s artistic practice is a sensitivity and responsiveness to place and situation, whether a country, landscape, relationship, festival or a party. When invited to participate in SafARI LIVE in 2014 but, having relocated to Germany, was unable to attend in person, she devised Best Wishes. It comprised a satirical, self-aggrandising ‘apology’ address presented by a hired actor, as well as cards and bouquets sent by Dillon to the curators and other artists in the program. Apologies for her absence were bookended by comments such as:

‘Have you considered presenting the festival in Berlin? People are just so engaged here.’…’I look forward to seeing the documentation, though I’ve been so busy here I’m not sure when I’ll find the time to enjoy it!’…’Living in Berlin has really opened my eyes to a world of culture I could only dream about back in Australia.’

Dripping with cultural cringe, condescension and blithe immodesty – anathema to Australia’s notorious tall poppy syndrome – these comments are calculated to induce discomfort, even dislike. Best Wishes satirises the way that travel, both for work and leisure, is mythologised as a source of productivity and betterment.

In other works, Dillon creates visual characters through gestures, expressions and elaborate costumes that she designs and produces. Her personas are acted out live or in videos, with a focus on characterisation over narrative. In Reykjavik, Iceland she created an alcoholic Sunshine Clown called Sunny, who, Dillon explains, ‘would drink a whole bottle of sparkling wine and burp along to Keep On The Sunny Side’. Rather than expecting a profound engagement with the sublime Icelandic winter, she examined the more prosaic reality of sunlight deprivation, isolation and loneliness.

Sunny the Sunshine Clown may seem morose, but Dillon has an uncanny ability to bring out the humour in bleak circumstances. Acknowledging and sharing low moments can be cathartic, and is far more human and relatable than sharing images of Arctic ice fields under iridescent skies. Through satire and gentle self-deprecation, Dillon ‘critique[s] the awkwardness of being in a place where you’re not familiar with the people or the landscape…where you don’t really belong’. During another Icelandic residency, this time in Olafsfjordur, Dillon collaborated with Anton Benois on a short film titled Fisk (2015), which followed the wanderings of, quite literally, a fish out of water. The outsider, clad in a fish-head suit, is lonely and out of place in a world of perpetual twilight. 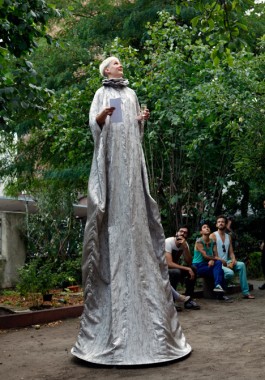 As well as her relationships to place, Dillon’s connections with other artists are integral to her practice. A regular collaborator, she has worked with artists and groups including Benois, Agora Collective, Merlin Carter and Rocket Collective. Most recently, she was part of a production team for Dreams for the Dreamless, a solo stage work of Geneva-based dancer and performer, Gregory Stauffer. Dillon devised costumes, scenography and video for the production, which is described as ‘a dark pop odyssey that confronts fantasies and clichés of the Scandinavian North.’ First staged in Switzerland, it will be reconfigured as a piece for exhibition in the Museum Tinguely, Basel, later this year.

Dillon’s most long-term collaboration is with Lachlan Herd and Kieran Bryant as 110%. Since 2013 the collective has presented site responsive work at festivals, club nights and art fairs. For Performance Contemporary at Sydney Contemporary Art Fair (2015), 110% presented Low Profile. The Fair context informed both the motivation and format of the work: a ‘gallery crawl’ that highlighted the contradiction of presenting non-commercial work in a highly commercial context. With custom costumes, kneepads and wrap-around mics, they crawled through the fair on hands and knees, providing commentary on works of art displayed specially at their height. Dillon explains, ‘as unrepresented emerging artists in a commercial context, feeling like we didn’t really have a legitimate place at this fair…playing with that felt really empowering’. Physical humour rendered the work palatable, with the trio’s affable, enthusiastic tour-guide personas mitigating the less pleasant symbolism of operating at the precarious end of a hierarchical industry. 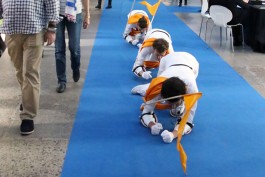 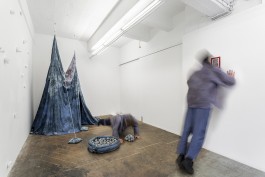 When Dillon and I spoke in October 2016, 110% was exhibiting A Summit Wouldn’t Do Without You (Training is the Essence of Transformation) at Bus Projects, Melbourne. The collective had been ‘looking at the motivational power of mountains, in particular the Western interpretation of mountains as something to be climbed and conquered’. Now, in July 2017, it is the final week of looking at me through you, a major group exhibition of specially commissioned works at Campbelltown Arts Centre. 110%’s contribution is grounded in a more prosaic landscape this time: that of the local sports field. Fieldwork (2017) is a performance installation that examines and reproduces some of the acts of maintenance required to sustain these sites of communal congregation and leisure. As Dillon and Bryant are overseas, Herd has been tasked with performing the work on behalf of the collective. Working across continents is status quo for 110%, and they are constantly developing ways to make this work for them, whilst also maintaining the friendships that brought them together in the first place.

Cultivating a multifaceted solo artistic practice alongside various collaborations is hard work, and sometimes Dillon feels that artists are ‘competing for opportunities that are not actually sustainable’. She is quick to acknowledge that grants, prizes and scholarships have allowed her to ‘keep functioning, and to keep being able to produce work that doesn’t necessarily have to sell’. She responds to the demand for artists to professionalise – to operate as self-contained small businesses, even when all available funding and income doesn’t come close to break-even – by refusing to take herself overly seriously. ‘I think it’s important to acknowledge the power of being able to be ridiculous, to play the fool, as a way to combat this pressure of professionalism’. Dillon continues, ‘I think so much of being an artist is trying to find alternative structures, alternative ways of being in the world, living in the world. Looking at systems that exist, and then thinking, how can you play with this? To accept things as given is very dangerous’.