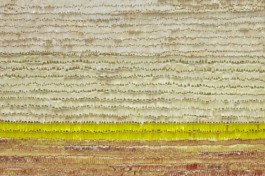 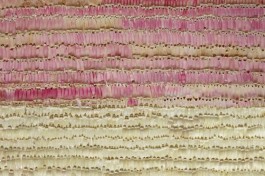 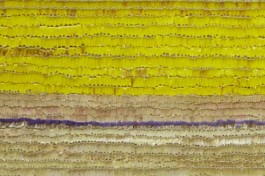 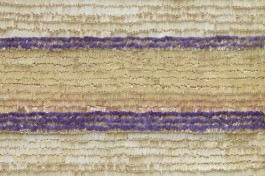 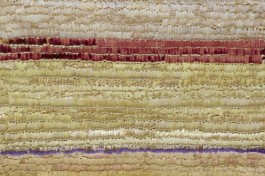 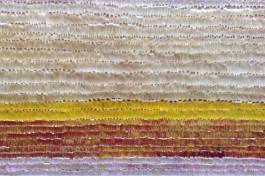 Wait & See III is a series of six documented compositions formed through a process of layering petals of the Paper Daisy and Statice flower onto a concealed surface. The different works in the series were created on a larger scale over several months, with this final selection representing examples of early experiments alongside more recent developments that have been cropped to reveal and reiterate certain details. The pieces were created through a highly labour intensive process, involving the initial collection of the plant material from the flower markets and various gardens through to the repeated action of selecting, extracting, placing and adhering the petal to produce the finished work.

The long period taken to create each of the works and the changing nature of the material connects it to a wider infrastructure of timekeeping. With each placement of a petal marking a specific moment and with each line in the composition completed in just under an hour, events, days, weeks and months can also be measured though these designs. The proximity of the future is also made apparent by the use of the living plant material, as the work continually shifts and alters shape, colour and texture. The developing state of the petals accentuates an act of ‘letting go’ of the artist in the creative process, allowing unforeseen possibilities and imperfections to actively manifest in and through the work.

The gradual process of creation, followed by degradation, reveals a cyclical pattern inherent in the work. Similarly, the repetitive action performed in selecting and then positioning the individual petals highlights both rhythmic and meditative motifs intrinsic to the work. While notions of contradiction, appearance and disappearance also actively drift throughout as the piece moves towards completion, so too does it draw closer to its demise. Circular and opposing forces connect through the work as the fragile nature of the petal material itself proposes questions about its symbolism, longevity and value.

The symbolism of plant material, as representing a lifecycle or a brief lifespan has been widely explored through the floral still life paintings works by Dutch artists during the 16th and 17th Centuries. The employment of flowers as the material itself in this work allows for a tangible form of brevity to be closely observed, as the work fades and withers over time. While the act of producing the work over a long period only for it to last temporarily, seemingly disrupts a logical system of production. The delicate and transient materiality of the flower also highlights the relationship between the artwork and the challenges of commercial exchange, ownership and of archiving.

Leahlani Johnson is a Sydney based artist whose practice explores the paradoxical nature of time. Working across the disciplines of ceramics, painting, installation, floristry and the moving image, her work employs disparate materials to reveal opposing durational qualities of stillness, temporality and flux. Divergent concepts of time are further examined through the process of making the work and in the final form an exhibition may take. With labor intensive and site-specific interventions lasting only briefly and exhibition lengths becoming extended or condensed in size.

Since 2009 Leahlani has exhibited in solo and group exhibitions in Sydney, New Zealand and France. Recent exhibitions include The certainty of this, 2015, Hazelhurst Regional Gallery & Arts Centre, Sydney and Forgetting what lies behind, 2014, at Bathurst Regional Art Gallery, Bathurst. From 2012 – 2014 Leahlani undertook a residency at Parramatta Artist Studios. In 2015 she completed a Masters of Fine Arts at UNSW Art & Design and a residency at the Moya Dyring Studio, Cite Internationale Des Arts in Paris with the Art Gallery of New South Wales.