IN OBSERVATION: THE DEFINITION OF AN EXPERIMENTAL METHOD

Were the eye not attuned to the Sun,

The Sun could never be seen by it

…sorting out differences about data, evidence, observation, may require more than simply gesturing at observable objects. It may require a comprehensive reappraisal of one’s subject matter. This may be difficult, but it should not obscure the fact that nothing less than this may do. 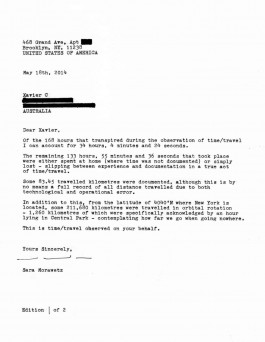 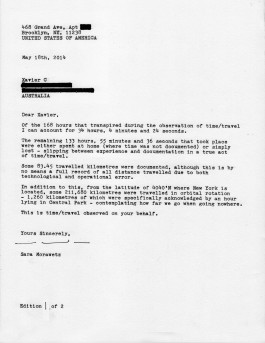 Set at the intersection of scientific and artistic action, this study is designed to demonstrate the high-wire act walked within interdisciplinary studies when seeking to create new forms of knowledge. It is an attempt to cleave the procedural rigours of scientific methodology to a studio practice, and, in doing so, examine the nature of observation as a function of science and as an action in art. I present here an experimental process – a method of testing the conceptual boundaries that govern what it means to observe through performative action while serving to demonstrate how these actions are transformed through scientific thinking. This study is an attempt to understand the theoretical shift that science applies to our sensory experience – to expose and explore the conceptual interpretation that is latent within its agency.

The premise is two-fold: (i) to understand observation from within a scientific system – to see how, if at all, the act of observing is changed by a scientific framework devised for artistic ends, and (ii) to witness the axiomatic properties of a scientific methodology – to engage in the formation of a system based on scientific principles in order to experience the limits and bounds of that system in action and to more astutely comprehend the scope and fidelity of the scientific method. This study has been formulated to expose operational mechanisms inherent within experimental science and to replicate these structures in a subversive yet systematic act – allowing one to simultaneously act as creator and witness. Each experiment is designed as an investigation of a singular observable phenomena, sourced via a randomised external mechanism and documented over a seven-day period. The objective is to chart the incidence of this observable phenomena is as it occurs within my daily experience (or just outside it) and to record it as accurately and abstractly as possible. With the prerequisite that the study would produce its own ‘experimental data’, that would form, follow and fall out of method, testing my own theoretical affiliations with scientific philosophy, the experimental system is considered a vehicle for written and/or visual output of unknown consequence.

This is an experiment – I am being tested.

As with all scientific endeavour, even those subverted by art, I begin with a series of definitions – an interlocking set of logical statements designed to both constrain and facilitate the discussions that follow.

Definition 2 (Observer). Let the observer be defined as (the principle / the artist) and the actions, documents and insights of the observer be references of one’s own behaviour. Let the observer be responsive to the stimulus of her own environment and explore each task as both a physical and conceptual possibility. The observer is bound to document instances, occurrences, ideas and actions, enumerating the logical and illogical within the task’s given parameters. The observer is concurrently an objective and subjective entity – who must detail the outcomes, objectives and flaws of both impossible positions. The observer is aware that their actions and responses are the subject of the study and that the nature of the observable phenomena and the recorded observations are inconsequential outside of their ability to test the observer’s methodology. Art may be found in this material.

Definition 3 (Collection of data). Given an observable phenomena, let the collection of data represent the material documented during the time of observation. Let the material be neither purely research nor art, but a conduit from which either may be made. May the collection data occur with the specified period according to conditions defined by the observer. This data may exist in any form of documentation: text, image, drawing, found material, related experience. It will be collected in the task journal or kept in close proximity to it. Let the relational distance of the collection of data never be greater than 5 metres.

Definition 4 (System of Rules). Let the parameters that define an observation be known as a system of rules. There may be rules within rules and systems within systems, but all must comply with the system of rules that govern the larger experiment. Rules should be defined prior to observation but may be changed, adapted or disregarded at the discretion of the observer – more important is the existence of rules than their strict application. A system of rules will apply to each observation independent of the overall study that is pertinent to the observable phenomena. These rules may dictate when and how an observable phenomena is observed and documented, and shall be recorded within the collection of data.

Definition 6 (Observation). Given a set of observable phenomena and a system of rules, let observation be the process through which an observer conducts an experiment. Let observations be an acknowledgement of the senses – a record of things that are seen, heard, felt or intuitively recognised.  May the act of observation be the instance of noticing or perceiving, a faculty of viewing or noting with a degree of attentiveness that, in this case, is directed by the independently supplied observable phenomena. The task of observation must border on obsessive and absurd – overtaking the observer’s waking hours and allowing them to wander freely off-course in pursuit of both earth-bound and abstract consequences, unknown outcomes and unintended possibilities.

Definition 7 (Time). Let time be defined as a continuous system of sequential relations, a method of measuring a passage, duration or succession of events within the infinite expanse of the past, through the present and into the future. May time be understood as a dimension in motion, a temporal measurement used to define both scientific quantities such as velocity and humanistic ones such as value and awareness. Given an observable phenomena, let time represent action and endurance, a physical constraint and an element of chance. Let time be acknowledged in the bounds of both physical and conceptual experience – being both measured and felt – both real and abstract. Let the passing of time be the performative action and an inevitable outcome of the act of observation.

Definition 8 (Experiment). Let an experiment be the method by which a concept (hypothesis) is tested, applying a system of rules over a length of time. Let an experiment be a logic-driven process designed to test ideas and the nature of things, providing the conditions for the collection of data and an active space where the act of observation can occur. Let the parameters of the experiment be tentative – temporary constructs that bend and flex in the pursuit of the unknown, allowing whimsy to intersect and overtake logic. Let it be known that the principle objective is not to follow the rules the experiment prescribes, but to understand how and why one breaks them in an action known as art.

Definition 9 (Knowledge). Let knowledge be the amalgamation of observations over time – the consequence of a collection of data amassed in the pursuit of observable phenomena that can be found in the observer’s reflections on performative action. May knowledge be an act of spontaneous cognisance or a shift in evaluative perception so gradual that it is near indiscernible to the untrained eye. May this knowledge offer the observer insight into the functions of science and the actions of art, the intersections of these pursuits that can be found in method. This knowledge is the objective of the experiment and will continue to accumulate as these words are being read.

I see that it has not changed, and yet I see it differently

Sara Morawetz is an interdisciplinary artist whose work explores the methodological processes that underpin scientific action. Interested in the influence of the “Scientific Method” on conceptual art, her work investigates intersections between the mechanics of scientific practice and the experimental undertakings of conceptual art, examining both the historical and present-day context. Sara is currently a Ph.D. candidate at Sydney College of the Arts, University of Sydney and is a visiting scholar at Parsons School of Fine Art, New School, New York.