I am a failure.

I will never be Gwyneth or Nicole.

I am neither thin nor blonde. I will never sob while accepting a Hollywood award.

Recently, I was rehearsing at PACT Theatre as part of the Stephen Cummins and Performance Space intensive. Bhenji Ra, a contemporary dance artist and proud non-binary identified practitioner asked us all to speak about our failures. I mused on the nature of failure and how failure to achieve mainstream recognition might in fact be its binary opposite, success.

My films have screened in Hollywood, at the queer festivals. All three short films. Liquor, Guns and Ammo, about diabolically toxic relationships, based on the shops I found in the USA where alcohol and guns could be purchased at a convenience store. Night Trade, about love, sex work and war. It’s a film about displacement and marginalisation. And Single, Sexy, Bilingual, screened not only in Hollywood, but in Cannes, not to be confused with that sanguine holiday spot north of the Gold Coast.

Back to blondes. I will never be able to perform blondeness, even with a ton of peroxide that makes my scalp peel. Blondeness is not just a hair colour, but an archetype, a performance. Blonde, performed beautifully, is not just about colour but about performativity.

As Nicole sniffles back her tears and pockets her award, I witness success performed so well I know I will always be a failure.

Though I’ve imagined success as the collecting of a big award in a little black dress, my films haven’t crossed over into the mainstream. But now, my life and that of my queer comrades (a dinosaur term from the politics of the 1970s) is being immortalised in a telemovie. And I am suddenly infamous for a night spent in jail in 1978, after being arrested at a gay rights protest in Oxford Street.

I wasn’t politically aware, but went along with my friends. I was in a floral frock and thongs and couldn’t run too fast. I was photographed being arrested by twelve police. Sharing the frame is a gay man with his head in his hands. One of the policemen has his hand on my breast, squeezing me tight. Not an act of love, but one of authority and assault.

At the time, I crossed my arms in resistance and saw my life and dreams disappear. I felt like a failure, and this moment of failure became public property.

Despite my sense of doom, I grew older, my hair greyed.

Now, in 2017, I am on the set of Riot, a mainstream production about the night of the first Kings Cross Mardi Gras in June 1978. I had been arrested two months later, in August, protesting against the violent arrests made in June.

Failure in one time becomes success in another.

I arrive by bus on the first night of filming and find myself ensconced in diaphanous fabrics from the 1970s. Millennials and post-millennials in purple velvets and paisley prints are playing a version of who we once were. I’ve taken off my glasses and trip over a few cords. A production assistant notices I am out of place, too old in comparison with the other actors. The refer to me as “an original”. A wardrobe assistant fluffs my hair and suggests I wear overalls. While removing my makeup I point out not all queers wore green overalls. I refuse to take off my red nail polish.

Chuck Palahniuk wrote, “Life never works except in retrospect. You can’t control life, at least you can control your version.” (1) My life is not their telemovie, I think, as I explain to the film makers that many in the GLBTIQ community did wear red nail polish in that era.

With my purple hair streaks disguised, I am sent to have my free cup of coffee, which somehow splatters across my ubiquitous paisley threads as I sneeze from the dust in the fabric. Now dressed in paisley with coffee coloured flecks I ponder the meaning of dressed for success. 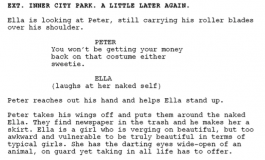 A sex worker friend was recently told her torn t-shirt and threadbare jeans were not suitable for a work for the dole program, but the street culture she is part of was the inspiration for the runway model heroin chic of the 1990s.

My version of life was deemed too alternative for mainstream funding, so I took up sex work to finance my film productions. I became a pole dancer but not a successful one. I earned enough tips to buy dinner and pay for the shooting of my films but not enough to complete them. I was a chubby, clumsy dancer and I wasn’t blonde. My dancing took place in trashy, tawdry places with a reputation for nothing. I was simply an enthusiast and to many, this was another failure.

But a feeling of happiness is a form of success and the pleasure I felt dancing nude around a pole was real.

Writing my own obituary long before my death I know that I will always be famous for my night in jail as an errant teenager who couldn’t run fast enough to escape the police. But if I had been given fated intuition, I would have known that what felt like my greatest failure was in fact my most sublime success.

I will never be like Gwyneth. I am now an aging hothouse flower, with hair once red, now fading to grey. The epiphany dawns almost too late. My failure to cross over into mainstream respectability may not be a failure at all. My work may only be known in the alternative culture world, but at least there I can control my own representation. My vision has developed a dark satirical bent, laced with flamboyance. The name of my unfunded and unfinished film is Flipside of Flamboyance.

Barbarella Karpinski is a filmmaker, researcher and writer who has made several award winning short films.