“No, replies the unhumbled optimist: You, you are only the present.”[i]

When things come to an end we often ruminate on what was and what will be; some look with optimism, while others look pessimistically.

I recently found an old short essay by Trotsky called, On Optimism and Pessimism, On the 20th Century and on Many Other Issues (1901). Of interest is Trotsky’s temporal classification of an optimist or a pessimist relative to the past, present and future and, by extension, his consideration of how the two dispositions frame a future gone or future present.[ii]

Now in its final act, 55 Sydenham Rd, presented three successive exhibitions, which looked at, and/or, worked with cinematic time and space.

The three – Seven Revisionists, And so I left and The Eyes of a Power Company – each conveyed a different experience of time: whether that is before now, presently in-between, or the future of the past

I review the three exhibitions with Trotsky’s above temporal categorisation in mind. 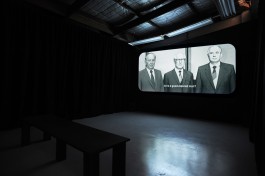 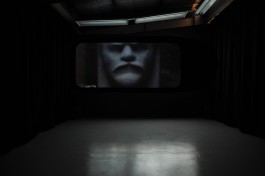 Kuba Dorabialski’s video installation Invocation Trilogy 2: Seven Revisionists (2018) is a ficto-historical doco-cum-odyssey/soviet slapstick, which sits both inside and outside time.

It is Thursday, 28 May 1987. In a fictional Pan-Slavic language, an unknown – yet all knowing – narrator shares character foibles, idle gossip and personal anecdotes about seven leaders from the Warsaw Pact states. One ‘thinks he’s a sophisticate. But he isn’t’, another ‘is basically Zeppo Marx’, the sixth he ‘first met in a health spa in Hévíz in the early 70s’; and the last ‘poor old man is unknowable’. Man-by-man the seven soviet leaders are recast as revisionists. In the spaces between we follow two young boys as they cross snow, water and rock to find a moustached monument in the depths of a forest. Adorning the likely Lenin icon in carnations the boys perform a eulogy of the seven revisionists. Finally, while driving at high-speed, and delivering a nonsensical monologue of Sovietisms, our narrator’s body collapses. In the confines of the driver’s seat, contorted, he abruptly spins like a disco ball to synthetic sounds.

In Dorabialski’s late-Soviet world we don’t know what we know, yet we (intimately) know the unknown. Disturbing the syntax frees the semantics to affect us; we watch the verbal morph into the bodily, the language contorting the past.

This miscommunication is expressed in Dorabialski’s cinematic form and the work sits between narratives and in-between genres. An obscured narrative, which has already started but never ends, and sometimes re-begins, corrupts the genre’s structure. Nostalgically the fictional becomes history, while an odyssey mutates into slapstick. We are fed traces of the past but aren’t led into the future.

‘One by one all of them succumbed to opportunism, revisionism, bourgeois nationalism and, ultimately, to decline.
But why did it happen?
…
Was it their weakness?’

In the last shot, the camera, symmetrically framed at eye level to our narrator, cuts to a reverse-short of the tunnel and we are left speeding uncontrollably into darkness.  Through Dorabialski’s (cinematic) syntax, which is both in and out of time, language comes into focus. In its unintelligible form the past becomes unknown.

Seven Revisionists follows Floor Dance of Lenin’s Resurrection (2017) the first part of the Invocation Trilogy, where under a mounted profile of Lenin in a sparse seventies office space Dorabialski interrogates Dorabialski: ‘do you or do you not have some faith’. Evading the tape recorder, the interrogatee breaks into interpretive dance.

We wait now for Dorabialski’s third and final act. 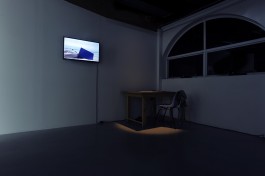 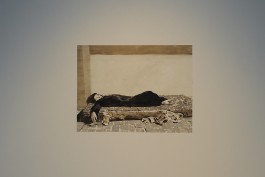 And so I left

Taking as its title the opening line of Chantal Akerman’s film Je tu il elle (1975), And so I left contemplates the act of leaving.

In Akerman’s film, in the first of three acts, the camera and protagonist (Akerman) are confined to ‘[a] tiny white room’. Knowing the end from the beginning, we wait and watch, over the course of a month the protagonist readies for her departure. She labours over a letter, repeatedly rearranging furniture, undressing and obsessively spooning sugar into her mouth from a brown paper bag.

At 55 Sydenham Rd And so I left beautifully adopts the quotidian tone of Akerman’s tiny white room.[iii] Visible as a whole only in the final two days of its showing, Elise Harmsen, Nina Knezevic and Nicola Smith made the works over the course of the exhibition’s run.

Each work is built from a cinematic moment. The artists selected a scene from a film and deconstructed the spatial and temporal aspects of that moment.

Harmsen re-awakens the denouement of Roman Polanski The Tenant (1976).  In the small video En cours d’étude (2018) the artist re-imagines the disturbed Polanski escaping from his bedroom window. Tucked into the recess below the gallery’s window we witness black and white footage of Harmsen’s own escape from the window above. Le locataire (2018) uses two synchronized projections, one of Harmsen another of Polanski, to animate a still and a projected image of the artist’s old studio, architecturally mirroring Polanski’s foreboding jump. In this doubling, cinematic and personal memory become indistinguishable.

To explore her own experiences of migration, Knezevic borrows a scene from Michelangelo Antonioni’s The Passenger (1975) where Jack Nicholson assumes the clothes, passport and identity of a dead man. In the film a new identity emerges when Antonioni disrupts the linear progression of time by merging the present into the past.[iv] In, Pasoš, Uruwhenua, Passport (2018) a studio desk, in the corner of the room, is strewn with objects: multiples of the artist’s passport photos, a jacket and a lone shoe. In a nearby video, blank passport covers animate the artist’s resting face.

Cleverly each work, positioned off centre or tucked into a corner, gives the sense that the images could be adjusted at anytime; much like Akerman and her furniture in the first act of Je tu il elle.

The exhibition, like Akerman’s film, looks at the moment (the space) between time. This meditation on the time before departure aptly foreshadows 55 Sydenham Rd’s own imminent closure. 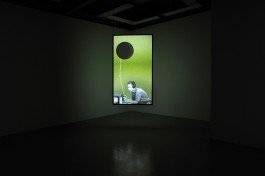 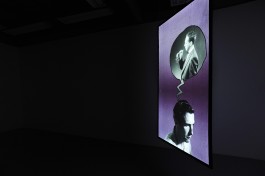 The Eyes of a Power Company

David Greenhalgh’s short film, The Eyes of the Power Company (2017-18), was made by cutting into the time and space of other people’s films.

Both artist and archivist, Greenhalgh, using the laboured technique of rotoscoping, slices, splices and knits a narrative from footage exclusively sourced from a public domain archive.

Through Greenhalgh’s cuts, what was once known becomes unknown.

The title of Greenhalgh’s film essay – lifted from an essay about information gathering in the field of Workplace Information Practices – is aptly irrelevant. Like our eyes, the title’s eyes are disembodied in Greenhalgh’s world.

‘PART 1: ASSAULT ON THE UNKNOWN’

…there are no words, only sounds.

…what you hear are electronic images…

[I]t’s like having a cochlear implant in your visual cortex.’

Following the subtitled collage, we begin to hear this new way of seeing.

Space is compressed as the background, middle and foreground merge into a two-dimensional plane and collaged figures and objects float in and out of landscapes. Through PlaneFace’s hypnotic soundtrack we see sounds.

Rebecca Gallo’s accompanying text observes, the inherent optimism within Greenhalgh’s practice: ‘Archiving is a profoundly hopeful belief system…It believes, in short, in the idea of continuing human progress towards further enlightenment and understanding…The reason we archive echo the reasons we make art…both archivist and artist hope that over time, meaning will emerge – both for themselves, and for a future audience.’

Greenhalgh’s film is accompanied by an appropriated Tintin adventure. Set in the future Quickly Shifting Ground (Tintin and the Curse of the Moral Vacuum), 2018 sketches the adventurer in a moment of existential dread.

Can a present pessimist still be optimistic about the future?

Yes. Nostalgically in Dorabialski’s future gone; hesitantly in And so I left; and irreverently in Greenhalgh’s present future.

[ii] The Trotsky essay was mentioned here: Arseny Zhilyaev, ‘Optimists of the Future Past Perfect,’ eflux 88, no. 2 (February 2018), http://www.e-flux.com/journal/88/172829/optimists-of-the-future-past-perfect/. The article is contextually irrelevant to the review but was of interest because it drew attention to Trotsky’s categorisation of pessimism and optimism across time.

[iii] Malcolm Turvey, ‘The Persistence of Vision: The Films of Chantal Akerman,’ Artforum 46, no.3 (November 2008), https://www.artforum.com/print/200809/persistence-of-vision-the-films-of-chantal-akerman-21346; Gary Indiana, ‘Getting ready for the golden eighties: a conversation with Chantal Akerman,’ Artforum 21, no. 10 (Summer 1983), https://www.artforum.com/print/198306/getting-ready-for-the-golden-eighties-a-conversation-with-chantal-akerman-35484.