The National 2017 runs from 30 March-18 June 2017 at the Art Gallery of New South Wales, Carriageworks and The Museum of Contemporary Art, Sydney

Neither a god nor a demon, Rostam ­was an ordinary man mythologised in Ferdowsi’s Shahnahmeh — a text that has defined a place and a culture for over a thousand years, and one which has also come to define the practice of Khadim Ali. The most celebrated hero in these pre-Islamic folk tales, Rostam appears as a complex and flawed figure, portrayed as a trickster and protected by demons, whose life ultimately descended into tragedy.

Khadim Ali’s mural The Arrival of Demons for The National inhabits the foyer of the Museum of Contemporary Art, depicting Rostam in various positions, with the title implying a sinister undertone. Passive giants, Ali’s demons evoke my own childhood memories, running around under tables at parties watching old Iranian men smoking cigars and drinking vodka, their bodies towering over me, neither gods nor demons.

At the foot of the Sydney Cove Passenger Terminal, Ali’s mural expands on his exhibition of the same title, held last year at Milani Gallery. Exploring recurring themes of what it means to be a refugee and what it means to be an immigrant in this country, his work represents the indolent giants of my childhood, carrying with them the trauma of a home country torn apart and a hope for normalcy, functioning in a space in-between. 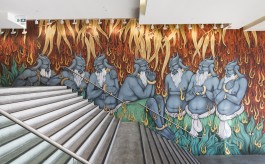 The Arrival of the Demons reflects this immigrant experience of being between worlds. Ali depicts Rostam stuck in a fiery limbo of what was left behind and the gold gumnuts and eucalyptus leaves that lace the edges of the mural like an Australian passport; their faces solemn, waiting.

Living between the spirit and the physical worlds, the demons in the Shahnahmeh also evoke this same sentiment of limbo. Manifesting themselves beyond the physical, as temptation, distraction and fate, these demons affect change not only through malice but also with a playful benevolence. Through the allusions to this text, the demons in Ali’s artwork appropriate the language describing refugees and immigrants as threats to the Western social order, to reveal it as a facile rhetoric.

The 15-metre mural echoes the themes in its physical displacement from main exhibit of The National two floors away. In the thoroughfare of the MCA, the work negotiates a path between the street above and the people entering from the boats below.

From my lived experience as a second generation Australian, The Arrival of the Demons evokes a space that belonged to neither my family, nor myself. Ali’s work provides an understanding of not only the journey, but also the state of mind of immigrants and the way in which this sense of longing and loss is a constant limbo carried down through generations.

Arian Bozorg is a writer based in Sydney.

The National 2017 runs from 30 March-18 June 2017 at the Art Gallery of New South Wales, Carriageworks and The Museum of Contemporary Art, Sydney

Arian Bozorg is a writer based in Sydney.