The National 2017 runs from 30 March-18 June 2017 at the Art Gallery of New South Wales, Carriageworks and The Museum of Contemporary Art, Sydney.

One of the highlights of the first edition of The National is Sydney artist Alex Gawronski’s three-part work Ghosts. This project consists of near to full scale replicas of three distinctive architectural features from the venues hosting The National: Art Gallery of New South Wales, Carriageworks and The Museum of Contemporary Art. These replicas have been transplanted into one of the other institutions to highlight the dissemblance between their respective architectural aesthetics.

These architectural follies are spectral markers that raise questions about the interrelation of the institutions they represent. Although they operate independently of each other, they inhabit a single ecology and can’t help but shape their identity in relation to one another. This co-dependence is harnessed and highlighted by The National as a joint venture. Ghosts, however, complicates this seemingly cooperative facade and hints at potential complications and tensions that underpin the operations of any ecology, which are never at a steady equilibrium.

Ghosts also brings to the fore the experiential dimensions of cultural ecologies, in which museological experience is inflected by precedent experiences of similar spaces. Memories of spaces and their spatial dynamics are constantly projected onto new experiences of similar contexts. Repeated exposure to the same spaces similarly leads to layers of memory and a slackening of perception which no longer takes notice of the familiar. This is a work that speaks to the circulation of audiences between these three institutions and makes physical the expectations, projections and buried memories that are continually transported between these sites. 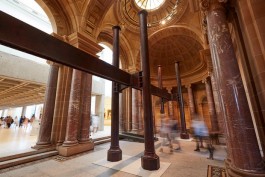 This work uses mimicry as a strategy for the investigation of memory and its operations and has too many precedents to recall here. However, the work that Ghosts conjured in my mind is a work by US artist Vija Celmins, To Fix the Image in Memory (1977 – 82). This work consists of eleven pairs of perfect replicas of stones discovered while walking in the desert of northern New Mexico. The original stones were cast in bronze and their surfaces meticulously reproduced through painting over the bronze. The original rocks and their replicas are exhibited together complicating the inherent individuality of each of these geological fragments. Like Gawronski’s, Celmins’ work is embedded within the histories of painting and its inherent interest in surface. The surfaces of both artists’ works feature meticulous reproduction of inherently mundane affects. This care and artifice is seductive and calls on us to contemplate the aesthetics of the banal or the overlooked.

Like Celmins, Gawronski has abstracted components of an environment by removing them from their original context and dislocating them into the system of art. In Ghosts this displacement has an additional dimension of uncanniness because the individual components have been specifically layered onto existing equivalent structures. This strategy is perhaps most successful in the AGNSW where the piece Thresholds, a copy of the industrial columns from Carriageworks, has been situated adjacent to the neo-classical marble columns that decorate the neo-classical vestibule of AGNSW. Despite the imposing scale of the inserted structure and the aesthetic contrast to its host, it seems to strangely hide in plain sight where it is often not registered as ‘art’.

The architectural extractions that comprise Ghosts call for a slowing down of perception and an interrogation of the symbiosis between the art object and its institutional context. They bring to the fore questions about how memory and habitus inform our understanding of the social and aesthetic conditions we encounter.

Artist Biljana Jančić completed a Bachelor of Visual Arts in 2007 and PhD in 2013, both at the Sydney College of the Arts. She has exhibited across Australia and internationally including the 2016 edition of Primavera at the Museum of Contemporary Art, Sydney and the 2016 Tarrawarra Biennial. In 2016 she was also the winner of the Fauvette Loureiro Memorial Artists Travel Scholarship.

The National 2017 runs from 30 March-18 June 2017 at the Art Gallery of New South Wales, Carriageworks and The Museum of Contemporary Art, Sydney.

Artist Biljana Jančić completed a Bachelor of Visual Arts in 2007 and PhD in 2013, both at the Sydney College of the Arts. She has exhibited across Australia and internationally including the 2016 edition of Primavera at the Museum of Contemporary Art, Sydney and the 2016 Tarrawarra Biennial. In 2016 she was also the winner of the Fauvette Loureiro Memorial Artists Travel Scholarship.