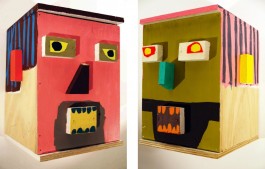 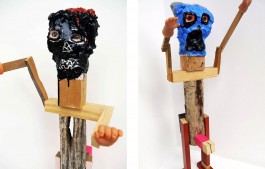 Islands – whether real or imagined – inhabit a liminal space somewhere between myth and cartography. Within this marginal space an array of competing, contradictory and interconnected fantasies have developed over time. Islands, as they are imagined, promise refuge and imprisonment, freedom and isolation; the ending of things but also the promise of new beginnings. Islands, particularly in the guise of fiction such as Daniel Defoe’s Robinson Crusoe, Alexandre Dumas’ The Count of Monte Cristo, Aldous Huxley’s last novel Island or H.G. Wells’ The Island Of Doctor Moreau, continue to captivate, intrigue and haunt our imagination.

Island discourses are often situated within narratives of survival and/or transgression. Within the concentrated form of the island, these narratives foreground the politics of power that circulate around the representation of island identities. The narrative construction/projection of island spaces is as much about declarations of territorial authority as it is about fictional possibilities, or mere scientific curiosity. Often behind the picture postcard of island wonder there lies a darker reality.

Long before it was encountered Europeans imagined Australia as a perverted place/island where the rules of nature had been subverted; it was perceived to be the moral opposite of Europe. Known at various times as the Antipodes, Terra Australis and the Great Southern Land, Australia was regarded not only as a physical counterweight to Europe but also a moral one. The European imagination subsequently fashioned an exotic, island landscape inhabited by monstrous creatures.  This dystopian construction seemed to be confirmed when European eyes first encountered the Australian environment; everywhere the settlers (invaders) looked, nature and the landscape seemed to be the inverse of what they had known. However if the repetition of this European response has become something of a trope, its repetition points not so much to an exhaustion of this experience, but rather to an inability to move beyond it.

Situated within an historical context, the male convict body in Monster Island appears as a monstrous entity that (in its criminal and working class form) was projected as a corruption of the masculine ideal. Like Australia’s island form, the convict body was constructed around a series of inverted discourses. Transportation to the penal colony of Australia functioned as a type of social/political rejection, a repudiation that denied the convict’s person and masculinity.  Consequently, Australian masculinity is intimately tied to both Europe’s historical representation of Australia as a monstrous island space and Britain’s articulation of the convict body as the perverted expression of a deviant, disfigured masculinity.

In this work the elements of history, place and gender are unpacked within a fictional space, whereby Australia’s monstrous island landscape becomes the topography into which the convict’s failed masculinity is cast. In this re-imagined Australia, the narratives of inverted, fractured island space and perverted convict masculinity are the fault lines that run beneath the surface of Australian European identity. We desperately attempt to cover over and repudiate these fault lines, but like the Australian landscape itself, they resolutely refuse to conform or comply with our European desire for rationality. The ongoing trauma associated with these narratives of failure generates a melancholic sensibility that traverses from the past to the present, as it continues to inform the performance of contemporary Australian masculinity.

Located within this dystopian ‘monster island’, this work is populated with a grotesque troupe of ghosts, ghouls and vampires. Drawing on a carnivalesque sense of the absurd and the comic, these monstrous incarnations stumble and bumble about the island hysterically as they violently search for a form of masculine identity/authority that is forever beyond their reach. Through a process of repetition, the excessive fragmentation of the Gothic monster is turned against both the European articulation of hegemonic authority, and the ideological desire to naturalise masculinity.  The mimetic realisation of the convict monster actualises not only a critique of essentialist formulations of identity but also establishes a constellation of different possible masculinities.  These re-animated convict monsters haunt the present as spectres of traumatic doubt.

If the convicts in Monster Island seem to gaze out with a sense of haunted loss, perhaps this is a fetishised loss, a type of phallic lack/failure, which Australian masculinity is unable or unwilling to disregard. However this very repetition as it spills into Australia’s island deviancy creates a contaminated space; a promiscuous island environment that harbors within its hybrid deviancy an array of realised and unrealised forms of masculinity.

Shannon Field is an interdisciplinary artist based in Tasmania. He has completed a Masters of Fine Art at the University of New South Wales (COFA) in 2008 and will submit his PhD in 2014. Shannon has exhibited widely in both Sydney and Australia. In 2006 Shannon was selected to represent the College of Fine Arts UNSW at Hatched 2007 the National Graduate Show. During 2007 he was also included in the travelling exhibition Bloodlines: Art and the Horse curated by Peter Fay. His solo exhibitions include Wild Colonial Boys (2007), and Terror Australis (2008) held at the Ray Hughes Gallery. In 2011 he exhibited Busted at Kudos Gallery, while more recently in 2013 he had an exhibition Monster Mash at the Devonport Regional Gallery (Little Gallery). Shannon has also been included in a number of group exhibitions such as Stitched at Penrith Regional Gallery (2008) and the exhibition Together in Harmony for 50 years – linking Australian and Korean Art, held in South Korea in 2011 and organised by the Korean Women’s Art Society in Sydney.

Monster Island is the latest instalment in Shannon’s ongoing exploration of Australian masculinity. This is a project that looks to unpack essentialist readings of contemporary heterosexual masculinity within a re-imagined Australia. In this fictionalised space, the Australian landscape and convict history are incorporated together as a means of addressing questions around narrative, displacement and identity.