It’s a burning hot day, unsettlingly late in the year, when I visit Wellington St Projects to check out Luke O’Connor’s HUNKS. The gallery is hidden past a series of construction sites and down a driveway, but the sunlight, and the sounds of power tools, and the smell of cement dust punch their way into the gallery’s front room. I can almost imagine I’m walking into an archaeological excavation site.

The ‘hunks’—thick-glazed chunks of stoneware—sit on raw-wood plinths, languid, proud, gleaming in the sunlight like sweating bodies. I had heard they were vessels—a word I assumed meant vase, delicate and ornamental—but on first sight that seems impossible: these objects are muscular, rippling, some sprouting lumps of what could be bone or crystal, others with a totally calcified-looking glaze like plate armour.

As I move into the room I notice that despite their variety they all share one feature: a small raised opening on the top. These openings reveal that these are vessels that have been gently crafted, perfectly balanced, and then dressed up as globs of conglomerate rock—the liquoring all-sorts of the earth, pink, green, yellow, and black minerals packed together into one party-ready shape. They nod to (but ultimately ignore) their own artistic lineage as objects of use, pretending instead to be artefacts unearthed from the depth of some otherworldly cave. There’s something playful happening here: HUNKS walks a ticklish line between a tradition of use-value, and a tradition of the ornamental; between beauty and brutishness; between the hewn and the grown.

I turn to the room sheets and find a short piece of writing by George Haddad that accompanies and illuminates the exhibition. O’Connor is dealing with some hefty philosophical themes here, and Haddad magnifies and distills them through a “gay man’s reading of [the myth of] creation.” In doing so, Haddad’s writing also strikes at a playful in-between zone as it pulls together the modern-slash-ancient conceptual depth of O’Connor’s practice. In Haddad’s vision, Man was created “a hunk. A chip of exquisite earth.”

My first impression of these vessels as sweating languid bodies returns as I read Haddad’s description of Man, once a Tom-of-Finland-esque angular beauty who has now become weighed down by his cracked phone screen, by applying for arts grants, by crabs and ennui. Man, in the twenty-first century, is now an imperfect vessel.

Through this reading, O’Connor’s works are firmly positioned as ‘queer vessels’, as “ugly-cute”, as confronting our “failings and our beauties”. This focus on contradiction and overlap, combined with Haddad’s transit from myth to modern and back again, centres a Sedgwickian understanding of ‘queer’: something multiple in itself, never settled, and therefore never fully able to be contained by its own definition.

The ‘queer vessel’ is something I have a long-standing interest in, and O’Connor’s focus on rocks, hunks of earth, and crystals all point to the ultimate queer vessel: the cave, the earth’s threshold. The vessels in HUNKS look as though they could be found within, and contain within themselves (like geodes), the unknown terrain of the cave—a space both limitless, generative, and mysterious, but also confined and cut-off from the world that surrounds it. 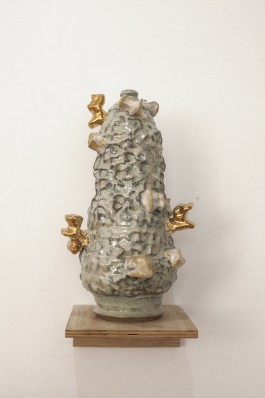 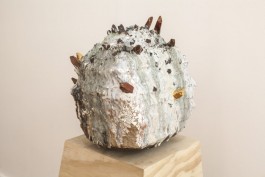 There is something in O’Connor’s work that speaks to a point in time when Man and rock were roommates. Going back to before what archaeologists call ‘behavioural modernity’, before our ancestors discovered figurative representation, we had vessels. Before we were sculpting those Venus figurines in the torch-light of deep caves, we were making bowls and pots out in the open air. And really, the vessel in a broad sense is not too far from a figurative body. The body is a vessel in many creation myths, clay made flesh, imbued with some mysterious spark; what Haddad calls God’s “dazzling breath of life”. Haddad’s writing refers to the symbiotic evolution of the vessel as an artistic tradition, and the more abstract philosophical understanding of Man as a vessel—a being that faces both outwards and inwards, that acts in the world, but also reflects on his actions. In HUNKS, these deep histories begin to butt up against one another.

Though the vessel figuration more often than not finds itself aligned with a specific kind of cishetero female morphology—with penetration and pregnancy—the vessel is undeniably the figuration with which all humans, all morphologies, can align themselves. We all eat, shit, and fuck. We are all “easily penetrable,” filled with ideas or emptied out by the weight of life, negotiating and renegotiating the false binary of ‘inside’ and ‘outside’ identity, never settled, never closed, never complete.

O’Connor extends the natural ‘queerness’ of the vessel—its complex dual tradition as both ornament, and use-object, that here “serv[es] no purpose”; its status as both one of the most ancient human objects, and a modern staple of design; its implicit philosophical query into the nature of ‘inside’ and ‘outside’—into an ontological statement about what it’s like to live as a queer subject in the twenty-first century. As I leave the gallery and breathe in the cement dust I feel as though I am soft on the outside, but rock on the inside—or maybe the other way around. HUNKS preserves a contemporary moment at which we are both calcified and covering up our precious vulnerabilities, while also cautiously melting to expose the gleaming rocks underneath.