Lie Down to Float, Please

The mechanism of an endless scroll of images transfixes and has no out or natural break; no pockets of air. Reflective surfaces demand the slinging back and forth of affective/devotional~curious energy which happens in one-touch moment to the next. Instants teeming with emotion and feeling are allowed to bombard you at any times of the day and it becomes impossible to avoid an overwhelmed state of inattention. Unconscious adulation of a device is normalised and succeeds in creating a preset mode of distraction—infinite momentary walls/zoning outs, uncanny or enforcing a premeditated boredom and obliqueness. Obliqueness comes in at an angle but itself has no angles — is rounded but not necessarily soft. Round in the way that air contained in a bubble can’t be grasped (gasped, breathed) and is out of reach. Softness is to do with touch—needs touch for its definition; something has to be touched to be soft.

Phones may be the thing we touch the most—maybe more, even, than we touch ourselves…  Yet through its surface it’s as though touch is magnificently absent, or magnified into absence. Touching, or all sensuousness, turns into a glaring distance. Scrolling through photos is like stoking a void—unable to let go of or stop eating what makes you sick, and yielding your consciousness and sense of time and place.

Words no longer cut it or take too long; scheduling in the writing of messages to friends.

Screens covet distraction whereas the distractions which occur when writing/reading are in accord with the multitudinous senses in one’s surroundings. A self-referential bubble is sealed in a loop between the fingertips and eyes, seesawing with the romance of older technologies; candlelight eyesight, epistolary epics, creases.

The spirit of some kind of spectacle was alive in the live concert film of Prince’s Sign o’ the Times. They ran around on stage so much! It’s the ultimate move—to run. And writing outside on a park bench could be its opposite? Embodying the grown up person with words old person swimming in memories middle aged person wading through, trying to remember, to be able to not have to remember, to shit. To not be costive!

The spectacle of the hole / glory hole

The force & the stuffing (the sensation, the happenings) in Sign o’ the Times (and Purple Rain)is palpable, is energizing, so sensuous. The feel of the fabrics; dirt, sweat, touch, texture, warmth, static, weave, clinginess. Spirit resides there? In these details, in concentration?

‘Letting your eye fall asleep is about not wanting to see. When it doesn’t see, it sleeps’[1]

I need to take better care of everything now. I need to take better care of everything now. Door handles, brushed steel, bulbous, the type which you press the button in the centre to lock, golden latches, the plastic bag from which they tipped out in a pile of winter leaves, browns, large five-fingered & hand sized. The pile, stash, a corner beside a parked car, stairs. I walked past down the stairs exaggeratedly imagining the 50 or so handle and latch-less doors from which they’d come; an elaborate heist, the means to steal, the in, the locks then becoming the prize/the booty itself, and then that being too much to bear. Being cast off at this spot, dumped, shimmering in the afternoon moon.

Everything being photographable—able to be contained/reduced but then somehow saddened, slighted, slightened, surfaced, singled out, worded, through that process. 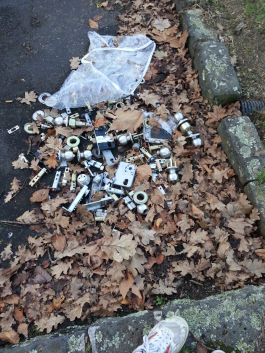 ‘The secret harmony of disharmony: I don’t want something already made but something still being tortuously made. My unbalanced words are the wealth of my silence. I write acrobatics and pirouettes in the air – I write because I so deeply want to speak. Though writing only gives me the full measure of silence.’[2]

With me, writing starts with reading; finding words that don’t easily fall into phrases or aid accomplished descriptions, nor immediately reveal a feeling or image. Words that, to begin with, elude any further purpose other than lending themselves to being copied, sounded, listed, to being familiar, understood, decipherable yet endlessly mouldable; able to be played with, entertained. Finding words which persist as materially accessible and graspable forms, always capable of creating life-like type-situations. I will only write when what someone else has written is in close proximity—when words which someone once gathered are still widely in my consciousness or have been traced into a notebook.

Writing—like riding out a storm— your way into, or out of, a state or situation by throwing words at it, by describing it, by talking it through. Words are mostly gaps or holes which leave room, whereas an image pervades the whole scene all the way to the edge of the screen, sucking at your eyes. The smallness of phone screens feels forceful, like a magnifying device. Its in-built proclivity towards countless daily moments of concentration (its potency) is surely at odds with vision and the need for peripheral and multidimensional mechanisms of seeing.

What does an image / how much does it show? How much is it a hole?

To begin with unwillingness to what? To see? Just to see, wait & see. Or to not let a metal, a hardened sadness that wants only to live in dreams take hold & rule.

A notebook with empty pages at one end seems wasteful, yet makes perfect sense because its value relies on having space yet to be filled. Starting & finishing is never contained within the same space.

As well as being a place for writing / (noting) something down, the notebook also carries leaves picked up off the ground marking a particular moment in time, not usually remembered, but which nevertheless act as a reminder of these unremembered moments; a pretentious and precious attempt at practicing perpetually repeatable and reachable instants of intention—attention.

So now, thinking, or rather, feeling, being aware of, or satisfied with the feeling that, the cliff off which to jump is (near) around, and that it doesn’t matter whether or not, or even how it is approached (where it shows up). Saying/seeing the word cliff, or any words has relaxed me. Has made me feel the cold right here, outside in the afternoon. Has to Breathing in the cold air, you have to Eyes hurt from staring into space.

The line the line the second-hand smoke, and the softening of feelings. I look along a line which is broken by a magnetic tree with blooming tips, branches.

Shoes on their side. Not going anywhere they make me think of desire, and the motivation to photograph them—to find someone who sees the beauty too? To prove that I have feelings that feel beauty? I want it to be known that I like the forms, that I like ubiquity.

You need to write outside write longer sentences, write what you saw felt

Letters – to be drawn—cared for, next to the pitches of machines, their metal

Times go by, at all times, times, places

The line between the lips

Pigeon in pursuit cooing real bad, tap tap or rather the sound of its tail feathers dragging along the path before a fluttering getaway by the desired

too long sleeves on a lanky young asian girl out with her grandma.

Not finishing sentences seems to be a really terrible thing. In English. Why? Incoherence? Laziness? Signals distraction?

No narrative. Is that a life? I tell myself? Lie down to float, please.

to be respectful of invisibility, forces, times

I squirm so easily

Wild words, becoming all that makes use of them because everything is catching. And to read them or write them can be electric, or majestic etc. And so embarrassing! Red! I’m reddening.

stuff the void
filling up, out of sight
The lonely channel opened up by reading is nonetheless experiential, whereas spectacle plays at being a substitute for experience

There is literally no space for naïvety on a screen phone. Photos somehow have no shame. Self-awareness of our contingent participation in the spectacle of consumer culture leads to more self-starting words: self-conscious, self-deprecating cynicism. Overcoming the embarrassment of exposition is a big part of the social media experience but fundamentally it cashes in on the instantaneous thrill leaving you without much scope to personally attend to situations/feelings without, time and again, getting snagged and winded.

Unexpected happening yet foreseeable and familiar drain, drone, the bane of existence—internet not working

There’s been laughter with myself.
How often do I find myself writing down a sentence like that?

Cherish but don’t covet your cynicism

Comfort, pocket spectacle, spectacles needed for reading—writing my novel on my lunch break lol, with Frank O’Hara in the basement

To the man who reeked of alcohol and said I had winsome eyes. When he’d said it I thought that winsomemeant melancholy, but I went away and looked it up, over and above the feeling of receiving fleeting unsolicited attention, I was flattered, touched even, by the discovery of a new word that had been applied to me—uttered in my direction.

Sometime, someday, in some style. In summer? At a time when any tears welled up too frequently and I’d often have to turn away briefly to compose myself, to again face the public at the library counter, which was actually always a consolation.

What am I respectful of when I write?

The syllables? (No) The form of letters? (No) Words? Perhaps? Syntax? Not yet. Language? I guess. Woodenness? Perhaps. So… matter? The pen’s ink? Sound? Silence? I need to be more respectful, I want to be more aware of its primordial fate(as Lispector says). 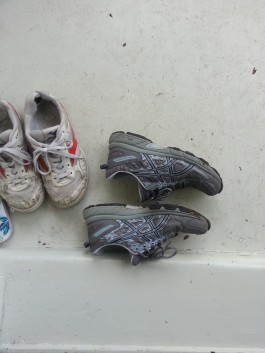 Melanie Kung graduated with a BFA (Hons) from Elam School of Fine Arts in 2013 and was a co-director of RM gallery and projects between 2012 to 2015. She has written for Matters journal and #500words, participated in The Physics
Room Reading Walking Writing workshop in January 2015 and has exhibited
collaboratively and in group exhibitions at split/fountain (Auckland), Window Gallery
(Auckland), and Pilot (Hamilton).