EXPERIENCING IT ALL THROUGH IMMERSIVE THEATRE

The distinction between art and life was blurred inside Laurence Rosier Staines’s interactive theatre piece, You Can Have It All, held at Sydney’s 2017 Underbelly Arts Festival. Participants took on roles of watching, acting in and stepping behind the scenes of a neo-noir television show over three rooms. As one of these participants, I felt nervous, confident and exhilarated while being guided into the rooms that correspond to the pre-liminal (watching and unknowingly preparing), the liminal (where participants are not themselves but not fully the character) and the post-liminal (a specialised part as the result of the two). To complicate the experience and the attendant feelings, liminal spaces were also made manifest between the three rooms. The spaces, artistic labour, technologies and liminalities contained in the experimental art of You Can Have It All made palpable how art is life.

At the door, the usher asks me, ‘Do you watch much TV?’ I say no, to which she replies that this will be a surprise. From the flash of apprehension on my face, she kindly tells me not to worry and to go inside and sit down. A young woman is sitting on a sofa in front of a flat-screen TV with a series playing; behind the screen is tiered seating—we are in a tiny lecture theatre. I sit on the couch and this woman excitedly describes her favourite TV show, You Can Have It All, which is up to its final season, number four. While this spectator talks, I sneak looks at the screen: there are the facial close ups, a woman on a dark street. It looks heady with clichéd images from neo-film noir. This performer turns me into a spectator of a show in which I would never be interested in my daily life.

The spectator tells me that the main character, Valerie, fell in love with a woman but the woman was a murderer and was sent to jail. Red lights from the screen reflect on to the spectator’s face when she speaks about murder. A flash of a gun. In its final season, the murderer will return and the spectator wills the murderer and Valerie to reunite, a true neo-noir pairing. The spectator stops talking and stares at the screen so I watch too. I notice movement from the back and coming down the lecture theatre aisle, a different woman (a factotum) says to me: ‘Don’t you hate it when that happens?’ I respond with a bewildered stare. I look over at the spectator and her head is bowed down as if asleep. 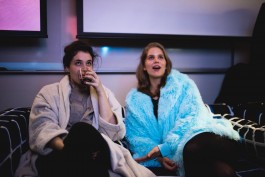 To reach what will be an extended liminal space, I walk up the lecture theatre stairs and follow the factotum. We exit into the staid art-school corridor; she tells me to leave my bag outside so I put it down and remove my bulky denim jacket. The bossy factotum gives me an earpiece to insert and a receiver to attach to my dress. A man working on a sound system and the factotum tell me to wait a few seconds to hear a voice giving me instructions through the earpiece. This corridor is a transitional space. Within the parameters of the artwork, the corridor is an important non-space space where you must spend a couple of minutes in preparation to enter the electrifying unknown.

Through my earpiece, I am introduced to a voice telling me she is my guide, to enter the door and take three steps. The door opens to a make-believe television set. Dark hues and blue lighting, and a contrast of yellow give the sparse set a moody feel. Video cameras are positioned to the far right of the set while actors stand to the far left. ‘Valerie’ and a male character, ‘Kit’, are waiting and launch into dialogue to which the guide in my earpiece tells me how to reply. From one room to the next, I have become the murderer in You Can Have It All.

I confidently act out the lines and directions fed in my earpiece, which is immediately thrilling. This scene is the culmination of a love triangle with melodrama, jealousy and violence, and reference to sadomasochism between Valerie and my character.

A short while later, I start to flounder when it’s time to improvise:

Guide: Tell her [Valerie] of the life you could have together.

I am also holding a fake gun and as instructed, get on my knees for this woman.

Me: I will give up everything for you.

Only clichés appear: words and promises I would never say in life. But it is something I imagine a murderer with a gun, who has already killed a man and who wants her ex-female lover back, would sedately say. 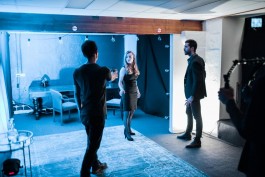 Sociologist, Goffman, compared performers to everyday people, in their use of language on stage and in everyday life. According to Goffman, even though trained actors know what expressions to perform and have scripts, the directions are often minimal[1]. In this section of You Can Have It All, the guide gives me little and pushes me to improvise. In a state of wonder, I have no idea what is coming. In common with actors, everyday people have to become skilled in idioms and the broader language that constitute the roles attributed to us. As a result, everyday people—like amateur or less experienced performers—employ what Goffman called ‘dramatized’ and ‘preformed’ devices in their/her/his ‘repertoire of actions’[2]. But in this neo-noir artwork, the participants’ ‘repertoire of actions’ or our toolboxes of experience to draw on—in spite of the guide, factotum and script—will be lacking. And this is where art is life. Schechner pointed to Artaud’s writing about training as an actor: To train in acting is not to take on a whole different persona but to ‘act in-between identities’[3]. This can be applied to You Can Have It All: what is real life and what is art becomes irrelevant because as the most amateur of performers within the artwork, participants will bring more of themselves but are still trying to become another character as part of a piece of art. Being thrust into this unreal world—where in reality as a Black woman on a neo-noir set, I would likely appear as a torch singer or an extra to diversify the screen—I can try to become someone else but will never forget myself due to the surprise element of each room, the liminal spaces of the corridors, and an absence of training. As participants, our experience in this main event and liminal space is wholly real life, fundamentally artistic and fantastical. 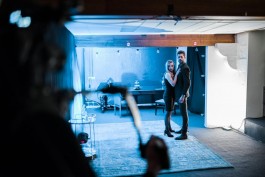 I am then led out into the third room, another small lecture theatre, dark except for two large flat-screen televisions on stands in front of the projector screen. I am congratulated by an older man for making it this far before he exits. A young surgically-masked woman with a tiny flashlight asks me to go down the stairs and to sit in a seat marked by masking tape in the aisle, on which also lies a script. I watch the screen for there is a set with Valerie, another character and a new participant. Following the script, I read out directions into a microphone in order to guide this new performer interacting with my ex-character’s former lover. Two minutes ago, I was a performer being guided, now I guide a performer in a totally different scene. Everything in the past two rooms leads to this: from spectator to performer to guide.  In a post-liminal space, the preparation (pre-liminal) and transitional (liminal) roles are over and new identities are born. Caught in the liminal space, this new amateur performer constantly giggles but follows the directions that I give in her earpiece. Of course, she also has to improvise and like me, she does this without aplomb.

Through the accumulation of participant experience in rooms one and two, the third room concretised what Schechner described as the ‘levels’ and ‘modes’ of seeing and experiencing and how they can occur at the same time. 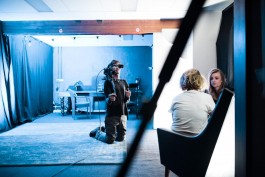 In life and in art, there is a particular framing and use of space. Everyday people and performers, spectators of events and other spectators can all be conscious of themselves and each other. This consciousness also relates to the relationship between what is transpiring in front of us and how we see what we watch. As a guide I watch this new scene (the event) but I also have to be aware of myself (‘the seeing-self’) with each new sentence from the script as this role is important for the new participant. If I had stayed as the script invited participant guides to, I would have seen other perhaps hyperaware new participant guides. Yet all participants had the opportunity to be performers, to be spectators and to be spectators of spectators.

While these levels and modes may already be obvious to those with social anxiety and to concert or theatregoers, Rosier Staines offered participants a novel way to think, feel and experience through an experimental theatre that is absent of curtains, a stage and costume changes for participants. What are more important are people such as the backstage and liminal space crew and other performers and technologies that enable participants to follow direction, direct others and become not-quite-someone else for a scene. They do all of this for us. The framing is purely for art and without numerous spectators as in concerts, theatre, museums or dreaded parties for the socially anxious. Like all the best art: You Can Have It All understands that the participants or ‘cultural consumers’ can fulfil the requirements and are intelligent enough to engage with the work. The extraordinary experience that You Can Have It All provided is generosity personified.

Claire Nemorin is a content associate in the travel industry and a member of the Finishing School, a women’s writing collective for those with strong connections to Western Sydney. Her interests include Black African and diasporic histories and cultures and being blown away by great art. You are welcome to say hi if you see her in an art gallery or museum.

EXPERIENCING IT ALL THROUGH IMMERSIVE THEATRE

Claire Nemorin is a content associate in the travel industry and a member of the Finishing School, a women’s writing collective for those with strong connections to Western Sydney. Her interests include Black African and diasporic histories and cultures and being blown away by great art. You are welcome to say hi if you see her in an art gallery or museum.