Music has to be recognized as an agent of social development, in the highest sense because it transmits the highest values – solidarity, harmony, mutual compassion. And it has the ability to unite an entire community, and to express sublime feelings. 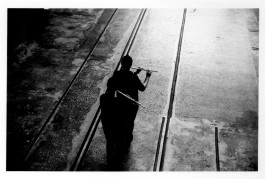 Classically trained composers are frequently taught that their Holy Grail is the symphony orchestra. It is the institutional standard, whose reassuring consistencies – not to mention pressed tuxedos – echo the gleaming white walls of the state-run museum. The aural result is considered to transcend human borders by operating within the abstract language of sound, despite having evolved within a specific European history. Furthermore, its structure embodies a meta-goal of unifying disparate individuals within a single communal unit: the perfect socialist paradigm.

Despite having studied composition, I long ago internalised the idea that, despite the orchestra’s ubiquity in classical music, my relationship to it was likely to remain that of a ticket-buying listener. Observing it, thus, from an outside perspective gave me the desire to respond to its model as a means to examine more closely the ways in which communities and collaborative structures might develop. In particular, the possibility that bodies of bodies might form in less hierarchical and more rhizomic modes, and that sound might become an organising principle.

With this in mind I co-developed Super Critical Mass in 2007, initially with my flautist colleague Janet McKay, then joined by my longstanding composer-collaborator Luke Jaaniste with whom I continue to direct the project. The model is simple and has remained more or less in place since our first public event in 2008. Together, we form temporary communities that create ephemeral works using identical sound sources within specific locations. In our first work we gave eighty flautists single sets of verbal instructions that allowed them to articulate the expansive concrete foyer of Carriageworks in Sydney, using the grid of embedded train tracks in the floor, the cavernous acoustic, the players’ proximity to one another and the audience as their ‘score’. The instructions were site-responsive and interpersonal so that the resulting sound – a rising, shimmering cloud of pure tones – was structured by the specific location and social formation within. 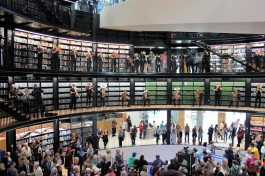 SUPER CRITICAL MASS – Together We Breathe 2013 – Library of Birmingham

This model forms communities through shared intention rather than shared identity. This is not to disregard the identity of each performer in their everyday lives but rather to set aside those identities for the duration of the performed action. Instead, the focus is on the commonalities or overlaps within the members of the community, a sort of figure-ground reversal from many community-driven works. Arming the performers with identical sound sources and largely identical instructions is intended partly to maximize equity and also to engender the sonic result with both spatial neutrality and complexity: a form of sonic ganzfeld1 that thwarts and complicates depth of field and counterpoints the heterogeneity of public space with a richly empty uniformity.

Of course, those that can play the flute represent just a fraction of the overall community. Widening participation to those who can play even several notes still relies on a similar model of resources as the symphony orchestra: access to an instrument, ongoing lessons and the time to practice. For this reason, over time we have shifted from working with musical instruments such as flutes, saxophones or brass to begin more equitably. The untrained human voice, for instance, is available to most people. In recent projects we have worked with massed identical everyday objects – ceramic bowls, gold coins and pieces of A4 paper – which has dramatically opened the aperture of involvement, drawing in a colourful array of faces, from teens and art school students to driving instructors and retirees.

Super Critical Mass, then, is about constructing community from the ground up, through shared intent rather than shared identity. It positions unity as an action rather than a classification. Rather than build a group based on existing commonalities – for instance, economic resources (a professional string orchestra), birthright (born since 1987), geography (born in or living in Western Sydney) or even shared interests (a chess club) – this model is about forming a group whose membership is based on the decision to mutually undertake an activity. Community as action, rather than community as inheritance. This unfolding social experiment has allowed us to observe the workings of community from basic principles.

How then has this project played out? What have been the material effects of our strategies? The first thing to note is that building a community from scratch can invoke tensions. In 2013, we created a work called Together We Breathe with 100 brass players from throughout the West Midlands of the UK. The work articulated the unusual architecture of the Library Of Birmingham, a large public space built around a multi-storey circular silo. The players dispersed around the gantries and across an hour gradually morphed from subtly treating their instruments as held objects (tapping and rapping across their metallic surface, blowing almost imperceptibly across the mouthpiece) into a persistent embellished sustained chord and then back again. The majority of performers joined from the broader community: office workers who had long ago shelved their French horn, art students who played in evening brass bands, retirees eager to share their chops. Their unity evolved across several site visits, off-site rehearsals and workshops within the space. A third of the group, however, comprised a virtuosic youth band from a nearby town. These players were exceptionally good, topping national championships, and their success was inseparable from their watertight social grouping. They had bonded through lengthy tours, shared the same in-jokes and were energetic and boisterous: a pre-existing tight-knit community. What’s more, by only joining on the final day of rehearsals they were augmenting a group that had already bonded through their contact and evolution with us. The final work succeeded sonically but we were effectively working with two separate ensembles, dissociated from one another like oil and water. 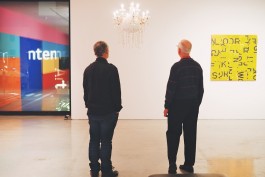 The mismatch of community can operate more positively in the form of self-perpetuating contagion – the spread of ideas or intent from person to person. In June 2014, we recruited about seventy participants to work at the Museum of Contemporary Art Australia. The title of the work, Moving Collected Ambience, describes the situation – a milling mass of people using their untrained voices to ‘read’ the gallery’s collection, using their proximity to artworks, their interpersonal groupings and particular rooms as their cues. Across the course of an hour they wandered and clustered, forming new social units as they moved through the public. In such a process the literal act of forming relationships – one, two, three or more at a time – could be observed spatially and sonically.

A starting premise was that the participants were indistinct from regular visitors: they wandered at a similar pace, viewed the same artworks, were of highly diverse appearance and dressed casually. Their vocalising was simple and subtle, largely consisting of closed-mouth singing. The resultant sound was thus unusually discreet, often at or below the listening threshold, and spatially ambiguous due to the lack of a labial ‘attack’. Unexpectedly, these conditions led to our ensemble growing beyond its intended size. Within certain rooms, after a certain number of participants were present, a mysterious residue of their presence could be detected after they left. It transpired that several members of the public had consciously or unconsciously begun humming, too. Such a tendency echoes Jill Bennett’s notion of ‘social atmosphere’1, the degree of energy in a room indexed to the number of people present. Here, a spontaneous community erupted through a shared abstract action, travelling beyond the pre-ordained ensemble. This was further enhanced in this case by an unconscious sensitivity to the surrounding ambient noise such as vocalists entraining to the constant tone of the dispersed air-conditioning system. 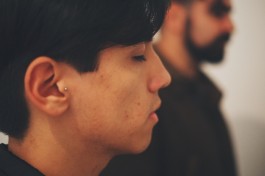 It would be naïve to think that simply bringing people together under the rubric of community is, in itself, positive. Community can be messy. It can divide. It determines that some people are in and some are out – a community and not-community. It can invoke deindividuation. Even the model of having a small creative team creates a closed community of artists. Despite our relationship to the participants being porous, we still had final say over the creative direction. Perhaps our best way of viewing this is that by acknowledging that energy can generate from the pressure between top-down authority and bottom-up democracy.

Super Critical Mass is, effectively, an artist-run initiative that follows various sets of interrelationships: between the artists; between the artists and participants; between the participants themselves; and between the participants and spectators/listeners. All of these relations attempt to operate as much as possible along flattened planes. The exception, perhaps, is between the artists and the participants, which operates more circularly. The starting point is the raw capabilities of the performers that, through structured activities in the space, begin to suggest creative directions. Whilst we transfer ideas back and forth and are open to feedback at all times, at a certain point the structure of the ultimate performative action emerges and we shift from facilitating to making final decisions as artists. How collaborative or co-authored the final works are remains an open question. Furthermore, the voluntary nature of forming this sort of community raises the question of labour: an ensemble enabled solely by volunteered time and energy is, in contrast to the professional symphony orchestra, economically lithe and responsive. We must acknowledge that in-kind capital is itself self-selective.

Super Critical Mass continues to be a social experiment that invokes and examines models of community building in ways that differ from real-world communities, which tend to be built on more intuitive and arguably static grounds. Employing neutral, abstract principles has allowed us to address community from an objective perspective, examining the power dynamics of existing social hierarchies and the challenges in introducing alternatives. Its framework offers the means to engage in these problematics through the material properties of sound, a relational and territorial energy that necessarily implicates multiple listening and sounding bodies through its spatial spread. Super Critical Mass, as an opt-in social practice, attempts to view relations through collectives of equal individuals rather than orchestras of hierarchical voices.

[1]  German for ‘entire field’, used in parapsychology to refer to an homogeneous visual field or excess of uniform meaning. Within art it is most commonly tagged to light and space works by artists such as James Turrell, who has named a series of works after this term, and Doug Wheeler.

Julian Day is an artist, composer and writer/broadcaster. He treats sound as a political phenomenon that queries proximity, agency and territory, evidenced in two site-responsive projects: Super Critical Mass in which temporary communities undertake homogeneous sonic tasks and An Infinity Room in which matching synthesizers instigate ‘turbulent geometry’ within the air. Day has presented work at Whitechapel Gallery, Museum of Contemporary Art and Monash University Museum of Art. He won the ARTAND Australia Credit Suisse Contemporary Art Award, an Australia Council Creative Australia Fellowship and British Council’s Realize Your Dream. He presents New Music Up Late on ABC Classic FM.