Grottspace is a free application downloadable as part of SafARI 2016. It is a computer game environment where each level is an instantiation of a grotto art gallery, populated by an exhibition of a different artist or collective from the SafARI 2016 program. I have created exhibitions for 2016 SafARI artists Claudia Nicholson, Sarah Poulgrain + Llewellyn Millhouse and Philippe Vranjes. The medium of this project was a conglomerate of software that allowed for a specific location, artworks and supporting media to be kidnapped, and reassembled into something that I call an art gallery, that can be downloaded and played on your computer.

Gary Carsley introduced me to the grotto under the car park in Elizabeth Bay in 2006. Having studied the history of English Picturesque gardens, I was excited to find a relic of that period, survived, and compacted by apartment buildings on all sides. The historical contradictions that this grotto encompassed encouraged me to steal it into the digital world, and to build a gallery for the presentation of Australian contemporary art.

Picturesque aesthetics emerged in England as a consequence of the Agricultural Revolution, which commenced in the 17th Century. Among other things, it facilitated the largest domestic land-grab in modern English history. Large public pastures were sold to private landowners, who transformed the newly landless peasants into their employees and reaped enormous financial profits. With these gains, the landowners built vast Picturesque estate gardens. The grotto was the focal point of the Picturesque garden, and was intended as a site of contemplation and reflection. Picturesque aesthetic texts written at the time advised the proper techniques by which landowners could improve their estates to the point where they did not appear to be estates at all, but merely ‘rustic’ nature. Historians of this period have written extensively about this cynical connivance of creating an artistic style whose intention is to naturalise dispossession.

Alexander Macleay built extensive gardens at Elizabeth Bay in the picturesque style, on a land grant afforded to him in 1826 by the colonial administration of General Sir Ralph Darling. His grotto is one of the few surviving relics of the garden, and stands as a reminder of the aesthetic tradition that accompanied the English in their colonisation of Australia.

Grottspace seeks to offer an art gallery that highlights its own lack of neutrality, and uses its history to enrich the presentation and reception of Australian contemporary art. 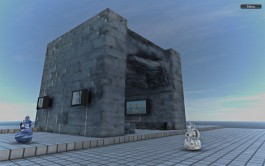 The neutrality of the white cube is repudiated from a number of different historical angles. As a pre-modern precedent, Petra Chu cites the removal of artworks from Dutch churches during the Reformation, and the whitewashing of church frescoes (intended to allow the faithful to focus on God alone) as a premonition of the Modernist white cube, which replaced the Victorian salon hang on patterned walls with the sparse white space (to allow the faithful interaction between audience and artwork)1. Chu and Brian O’Doherty argue that, far from being neutral, the white cube gallery is a machine for reproducing established relationships between artist and audience, commerce and ethics, as well as a sense of reverence, inherited from its history in the church2. Another relevant precedent comes from the Victorian invention of the public art museum in England. Both an exercise in civics and state making, the institution taught the public how to behave themselves, and projected a vision of national identity that could be collectively owned by the museum-going public3. The art gallery tells us who we are just as much as the artworks do—they work in collaboration.

Governor Darling’s land grant to Macleay was controversial even for the time. Elizabeth Bay had been designated as public land, and assigned by Lachlan Macquarie to the Sydney Aboriginal community4. The gradual subdivision and sale of the Macleay estate offers a succinct summary of the contradictions inherent to the aristocrats of the colonial era. Upon arriving to Australia, Macleay was given a large tract of public land by a friend in the government. Living beyond his means, Macleay’s debts became unserviceable. The end of convict labour, the drop in the wool price and Macleay’s early retirement meant that his Elizabeth Bay estate could no longer be maintained, and his inheritors gradually sold off subdivisions to balance the books. Parallel to this, Macleay and his family made sizeable contributions in the fields of entomology and botany, and later bequeathed large collections to The University of Sydney’s Macleay Museum and the Mitchell Library. The tensions between Enlightenment Empiricism and Colonialism resonate in the walls of this small sandstone cave, now a quiet grotty spot for the night times of teenagers.

In Grottspace I created a gallery that was overtly contaminated by history and context. I thought this might be an interesting way to present the work of my community — to put the art and the gallery together in a machine that amplifies a feedback loop of culture and context. 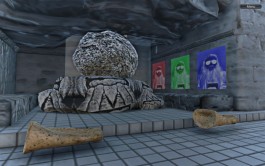 In these first three exhibitions, my process varied substantially. The first exhibition was for Claudia Nicholson. I’ve known Claudia for almost ten years, so making her exhibition was a personal response, a comment, or a tribute to an artist and a friend. From conversations with Louise Dibben (the curator of SafARI), I was introduced online to Sarah Poulgrain + Llewellyn Millhouse and Philippe Vranjes. Sarah and Llewellyn sent me videos and descriptions of their work in progress for SafARI. I stalked them online, and made their exhibition using all the materials I could gather and interpret. As soon as Louise had made the introduction, Philippe was an enthusiastic correspondent. He would send me Photoshop mock-ups, I would send him screenshots or walkthroughs, and we traded back and forth until the exhibition was settled. From the cerebral motivations behind Grottspace, there were obvious contradictions in its authorship. The notion of grabbing the mike from other artists and overwriting their work with my own aesthetic reproduced an echo of the colonial context I was seeking to critique. So it might not be a critique at all, it might just be a gallery that wants to own-up to itself, and through honest contamination, create resonances between the artworks and the space.

The authorship of Grottspace was also defined by how much I could assert myself within consumer software packages. My formal training is in painting and drawing, so I was acutely aware of which parts of this project have an aesthetic because I made them look like that, which parts look a particular way because a program had the ‘make it look pretty’ filter, and which parts resulted from errors that I couldn’t resolve via YouTube tutorials or forum posts. There is a subtext here, a political declaration that it does matter when an artist engages with the interface required to make their work. Sometimes things look and work in a particular way because an artist grinded them to achieve that form, and sometimes it was because a bunch of programmers grinded the code to make the filter. I’m not suggesting any qualitative distinction between these two modes, but I am suggesting that they are important for discussing authorship in a work such as this. Behind any Grottspace level, artists made works, I spoke to them, I received documentary material of these works and then I built game levels. I also ended up with a project that looks like it was made in Unity 5. 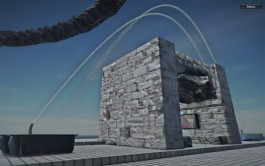 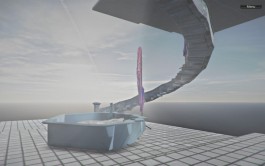 Which brings me back to colonialism and galleries. The picturesque grotto was a conceit – it was a place for the aristocrat to write poetry, to inhabit the sacred reverie of St Jerome and all the other cave contemplators, while deceiving himself about the politics of the ground on which he sits. The exhibitions in Grottspace are by other artists, but to differing degrees, they are by me, in a space that I control. I wanted to create these exhibitions as gifts for the SafARI artists involved, but, as a grotto, it is also an act of theft. I curated their artworks into a reverie with my name on it.

After SafARI, I will move Grottspace over to my own website and treat it like a piece of software, making updates, new exhibitions, interactions, documentation and writing.

[2]  Brian O’Doherty, Inside the White Cube: The Ideology of the Gallery Space (Expanded Edition), (Berkeley: University of California Press) 1986, p.79

Peter Nelson is an artist from Sydney who works between drawing, sculpture, and digital media. His enduring interest is how various traditions of landscape painting record how we understand ourselves, and our relationship to the physical environment. In his artworks, Nelson combines fragments from other artworks to create new environments. Layering multiple histories on top of one another is the closest thing he can think of as a landscape for today.

Peter Nelson studied panting and drawing at UNSW Art & Design and graduated Honours, the University Medal for Fine Arts and a Masters by Research. He has been artist in residence at Red Gate Gallery (Beijing), Cite Internationale Des Arts (Paris), Taipei Artist Village (Taipei), Organhaus (Chongqing) and Serial Space (Sydney). He has held solo exhibitions in Sydney, Taipei, Hong Kong and Chongqing. He is currently undertaking a PhD at the School of Creative Media, Hong Kong, specialising in the interaction between landscape art history and computer games.