GASTROPORN, OR THE SEXUALISED EATER

Three contemporary female artists—Kawita Vatanajyankur, Elizabeth Willing, and Jodie Whalen—subvert prescribed food etiquette in their performative endurance films, which can be read as a form of gastroporn. The act of eating can provoke a self-conscious awareness, especially for women, with image and body issues commonly linked to food consumption. These artists reflect on this awareness by confronting the viewer with their messy eating, repositioning him/her as a voyeur in fetishistic gastroporn performances. 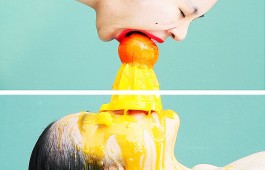 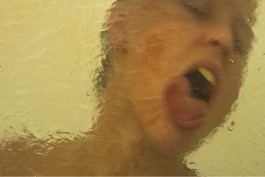 Kawita Vatanajyankur’s endurance films are set in front of candy coloured walls; the bright and cheery hues contrast with the physical and sometimes gruelling tasks the artist sets herself. Using fruits purchased from her local Thai market, she deploys her body as a tool to reinterpret chores performed at the market, such as juicing oranges or carrying precarious bins of watermelons. In the split channel video Squeezers (2015), Vatanajyankur’s red lips are wrapped around half an orange, and she uses her mouth as a tool to pivot and twist the fruit onto a protruding juicer. In the bottom half of the split screen, Vatanajyankur lies passively on her back as rivulets of hyper-orange liquid stream over her face and hair like a messy, gratuitous cum shot. Although the scenes evoke a playful atmosphere, as the film progresses, the viewer is left uncomfortable watching Vatanajyankur test her physical limits while completing these subverted domestic chores.

In the durational endurance film Lick (2009), Brisbane artist Elizabeth Willing appears facing the viewer, her head and shoulders bare, hinting at nudity. Willing is filmed through an uninterrupted pane of burnt sugar, a yellow-tinted “window” that partially distorts her visage like a textured shower screen from the 1970s. As the film progresses, Willing examines the surface, opens her mouth, and drags her tongue across the sugar. She alternates between a languid licking gesture and a frenzied action of pressing her entire mouth against the pane and rapidly moving it against the surface: the effect creates a fleshy mash-up of lips, tongue, and teeth. The task of licking through the pane of sugar is monotonous and takes over 30 minutes to complete. Over this time the soreness of her jaw and tongue become apparent, as does her growing resistance to eating the sugar. She experiences physical discomfort in ingesting so much of this substance. There is a voyeuristic unease in watching her lick the sugar, and yet this image also has an entrancing quality. The viewer wants to see Willing succeed, to see her break through the pane and resolve her task.

Sydney artist Jodie Whalen pushes her physical limits within her performance practice through eating and exercising, actions that draw attention to the physical form of the body. Her two-channel film Positive/Negative.Positive/Negative (2011) presents the cyclical nature of food consumption. On the left screen, Whalen is pictured carefully sucking a block of toffee; the portion size matches her suggested caloric intake for the entire day. The right screen features a compilation of archive footage depicting Whalen exercising on a stationary bike. When viewed together, the films depict the polarity of gain and loss; in one frame Whalen is acquiring calories while simultaneously pictured methodically burning them off. While sucking the toffee, Whalen looks directly down the barrel of the camera. She stares fixedly ahead for the duration of the performance, which is almost 45 minutes in total. The viewer is caught watching her suck and sweat. The panting noises associated with her exercises and her mouth slurping the candy are clearly audible; they could be read in a sexual manner, providing yet another layer to the ‘gastropornographic’ aspect of this work.

In a recent New Yorker article, Bee Wilson muses, one of the rudest things you can do, food-wise, is to stare at someone in the act of eating. She writes that as a bodily function, eating leaves us feeling exposed; it is a primal urge that drives and directs our behaviours. Elspeth Probyn examines the intersection of food and sex in her text Carnal Appetites: FoodSexIdentities (2000) where she suggests, ‘Eating and sex provide the opportunity to go beyond a model whereby the body is an inert entity that passively accepts what goes into it’. This places the emphasis on an active body that interrogates interior and exterior boundaries in highly sensual encounters.

In these films, the female mouth licks, sucks, twists, and lies passively in wait. These works draw attention to the female body, the effects and consequences that rigorous exercises impose on the flesh and test the physical limits of endurance; an act that is oddly transfixing as viewers are able to sympathise with the pain and discomfort each task induces.

Vatanajyankur, Willing, and Whalen present consuming bodies, positioned to draw analogies with the female form that is visually “consumed” by a titillated audience. In her study of food etiquette, Margaret Visser observes that in some cultures ‘it is considered shameful to be seen eating by outsiders, even guests; people may sit in a corner or facing the wall to eat in some cases, or delicately hide their mouths when masticating’. Similarly, sexual encounters are actions that typically occur in private spaces. The “pornographic” aspect of these artworks is the intimate gesture presented as a public spectacle.

Megan Fizell is a Sydney-based writer and curator whose research interests include performance art, participatory art, and the use of edible materials. She holds a Master of Arts (Art Business) from Sotheby’s Institute of Art – London, a Bachelor of Arts (History of Art) from the University of Michigan, and is currently working on a Master of Arts (Art Theory) from UNSW Art & Design researching the use of edible materials in arts practice from the 1990s to the present.

Fizell is the Gallery Manager at Brenda May Gallery, Sydney and her writing has appeared in Artlink, Ceramics Monthly, RealTime and on the websites of Curator and art:21 among others. In addition, she has contributed to the exhibition catalogues of Acquired Taste: Food and the Art of Consumption (California State University, 2011) and Slow Burn – A century of Australian women artists from a private collection (S.H. Ervin Gallery, 2010).

Previous curatorial projects include Mouthfeel (June 2015) and Sugar, Sugar (October 2013). Mouthfeel was an exhibition of video work exploring synaesthetic responses in the viewer and Sugar, Sugar featured contemporary art made exclusively with sugar by ten female artists from around the world.