Last year I was traveling to Indonesia on a cargo boat, to Borneo via Sulawesi. A ‘No Fly Zone’ had been placed across the whole of Indonesia as a security measure due to the Miss Universe contest hosted in Jakarta, so for anyone wishing to visit the country mid-event, alternative transport had to be arranged. Like me, almost all the other passengers on board had hesitated and made up their minds much too late, missing seats on luxury liners and yachts. Our boats cargo was an empty shipping container soon to be filled with plastic slip-on sandals.

Tom Cruise was on board doing research for Captain Phillips II, which was (is) highly confidential information. In Cruise’s company was Damon Albarn, Slavoj Žižek and a seeing eye dog called Giant George. Aside from Cruise, everyone else didn’t want to be on the boat very much at all. Except maybe Giant George, who kept to himself in the lower hull drinking Presbyterian Whisky Highballs and staring into the ocean through a porthole. No one knew if he wanted to be on the boat or not. 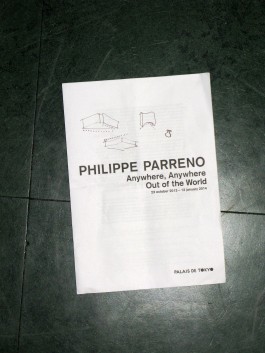 The captain was a retired Jamaican tennis player named Charlie Burke. He had just watched a pirated copy of Captain Phillips (original) and was talking Cruise’s ear off. He told us he was negotiating his own showbiz deal with Sony Music. His “thing” was sea shanties with a positive message, reggae style. Cruise said he was into that. Žižek, getting highly agitated said ‘And have you seen Titanic? Keep your eyes on the fucking road!’ and Burke replied by saying that he had seen Titanic many times and that Žižek had just lost his place at the Captain’s Table.

While the Captain and Žižek were arguing the boat crashed into a large iceberg. Everyone was surprised to see an iceberg in the pacific ocean, even Žižek. However following a closer inspection by Giant George, it turned out the iceberg was actually made of reinforced fiberglass, and stuck to its side was a didactic panel explaining it to be an artwork by Philippe Parreno, originally shown in the exhibition Anywhere, Anywhere Out of the World. As most know, the world’s museums have long run out of storage space for large sculpture and installation works, even works by Parreno. And so the artist had decided to dump the iceberg in the ocean. He titled this second phase of the work Broken Circle Spiral Iceberg and it was already getting great reviews.

The first mate confirmed over the two-way that our boat had strayed off course into the Great Pacific Garbage Patch. Also that we were taking on a lot of water. ‘We’re going to be here a while’ said the Captain. So we all crossed onto Garbage Island while repairs were being made.

We quickly found a bar called Landscape USA, and ordered drinks. ‘This place is ghastly, it stinks and it’s horrible’ shouted Albarn. ‘Barman, give me two beers NOW!’. The barman jumped to it, popped two bottles and quickly passed them over. We all drank in silence. Less than a minute later Albarn was at it complaining again. ‘Barman! Someone has spiked these beers! They’re pale and tasteless and making my feet all tingly and cold’. The barman apologized and quickly produced two more beers, this time served the right way up. ‘That’s better,’ Albarn sipped.

Sitting at a booth across from us we then noticed three contestants on their way to Miss Universe. There was Miss Teaching, Miss Practice and Miss Enlightenment. Miss Teaching was telling an Irish joke, Miss Practice was performing an airline joke, and Miss Enlightenment was reciting her favourite Nazi joke. ‘Please, one joke at a time!’ interrupted the barman and we finished our drinks and left.

The human body is just a sloppy instrument of perception, thought no one in particular as we gathered back at the boat, kicking turds from the soles of our shoes and scanning for any sign of the captain and crew. Everything was silent. ‘This is really spooky’ said Cruise, wiggling his fingers. ‘As spooky as a city map of Münster with eye holes,’ said Žižek, referring to his annual Halloween costume. No one responded to this directly, but instead used the moments silence for clambering back on board the cargo boat. Giant George took the wheel. Albarn took out the Captain’s log book. Drifting out to sea, a final entry was now added. It read:

Dear Log. Why are you so hard? Wood you grow old with me? I will never leaf you.

Returning to the boat, we found it crowded with two of every animal. There was two giraffes, two elephants, two crocodiles, two cows, two kangaroos, two peacocks, two tigers, two cobras, and two goldfish. All were gathered in front of a white screen, hushed as though awaiting the arrival of a sacred image. A single monkey worked frantically at the back, pushing buttons on a slide projector. Again and again he played the buttons, trying this one and then that one, and in every possible sequence too. No image. We decided to sit down, taking the last available seats in the front row. ‘This really needs to begin,’ said Cruise. ‘Yes, and after that we’ll probably need a middle bit,’ said Albarn. ‘I’m just here in hope of an ending,’ said a goldfish.

Back on board the repaired boat, we gathered together at the helm. The sky had darkened and cyclonic winds began to blow. To calm the nerves Giant George suggested a singalong drinking game called Gimme Shelter, invented by the Rolling Stones in the mid 1990’s. Each time the lyric “…just a shot away!” is sung we all drink a Cocksucking Cowboy, he explained. So we played a full three renditions, right up until Albarn slipped on some butterscotch schnapps and toppled overboard. In what looked like slow motion he desperately tried to swim back to the boat. ‘Despite the cost of living, have you noticed how popular it remains?’ said Žižek as we gradually pulled further and further away.

Tim Woodward is an artist living in Melbourne. He employs a multidisciplinary approach to making, working with a range of mediums and forms including the production of video, audio recordings, text, sculpture, installation, and public events. Mixing fictive or poetic reasoning with more formal methods of research, his practice is concerned with the manipulation and re-imagining of existing cultural objects and images.

Woodward is a recipient of the Art & Australia Credit Suisse Contemporary Art Award, The Ian Potter Cultural Trust Grant, The Melville Haysom Memorial Art Scholarship, and the Studio in Paris Scholarship awarded by the Art Gallery of New South Wales. He has exhibited at the Queensland Art Gallery | Gallery of Modern Art, Brisbane; West Space, Melbourne; Contemporary Art Tasmania, Hobart; Adult Contemporary, Perth; and the Jogja National Museum, Yogyakarta. Woodward was a founding member of Boxcopy (Brisbane) and a co-director from 2007 to 2011. He is represented by Darren Knight Gallery (Sydney).