Indigenous practitioners constantly fight a tokenistic treatment of their art in the form of Essentialist[1] readings and positionings. Contemporary art adheres to certain schools of thought, terms and definitions, that are estranged from indigenous communities, and the practices within them. As an indigenous artist, I find myself asking what impact this has on contemporary indigenous art practice. There is a perceived need to fit our work and thinking within these contemporary art constraints, rather than establishing forms of articulation for ourselves. What this does in turn is undermine those Indigenous frameworks from which art is made.

We live in a time where our global communications are mainly controlled through key colonial – now hegemonic – languages and cultural prisms of English, French, Spanish, Portuguese, Dutch, Arabic, Russian and Chinese. When indigenous artist use these (and notably English) in this part of the world, it only reaffirms what we know as being other to who we are. Language determines how we express ourselves, learn, and come to place ourselves in the world.

Post-colonial theory has highlighted the need for us to reconsider the language we use. Many terms that are now a well-formed part of the English contemporary art language are not appropriate when addressing indigenous practice such as ‘heritage’ which Aotearoa New Zealand-based Tongan curator Kolokesa Māhina-Tuai reasserts. As she highlights ‘art’ and ‘heritage art’ or ‘craft’ create false binaries[2] for indigenous practitioners with so called ‘heritage art’ being made by contemporary makers.[3] Tongan terminology doesn’t differentiate between fine art and craft[4] therefore distinctions force this contemporary art practice to sit within misleading positionings.

Language also needs to continually change to remain relevant, allowing it to adapt to technological advances, progression of thinking and new ways of being. We become accustomed to our systems of thinking and methods of articulation when we don’t question and critique these systems, losing track of what is possible and what has been achieved in language and politic. The writing of Melbourne-based curator, artist and writer Léuli Eshraghi proposes new frameworks for decolonising language, stepping away from homogenizing terms such as Pacific and Western.

We have come a long way from Totem and Taboo[5], and while many scholars have refuted psychoanalysis, Freudian approaches are still engrained in linguistics. For example the use of the word ‘savage’ featured heavily in 18th and 19th Century romantic literature is still a subject of interrogation for Pacific practicioners[6]. For Aboriginal Australian cultures between 40,000 – 60,000 years old to be referred to as ‘primitive’[7] highlights the colonial epistemological frame and lens these texts and many since have been written from. While Freud can be forgiven for thinking this way in 1913, continuing this school of thought today encourages the homogenisation of cultures, race-based discrimination, and forgets to embrace diversity. Sydney-based curator Stephen Gilchrist from the Yamatji people actively curates ‘culturally resonant’ space where Indigenous practices sit outside of psychoanalytical us-them dichotomies[8] by morphing indigenous forms of story telling with museum display structures.

What Léuli Eshraghi, Kolokesa Māhina-Tuai and Stephen Gilchrist do is aim to reestablish our understanding of Indigenous practices by validating Indigenous modes of thinking and being. This confronts audience complacency, forcing people to reconsider basic assumptions.

In a way, Indigenous practice requires far more resources to receive an authentic understanding of practice. We need to produce multi-lingual interpretations, overcome cultural barriers and educate, as well as appreciate. What this does though is establish laborious frameworks before the audience has even laid eyes on the artwork. This experience of viewing furthers the us-them dichotomy by marginalising the work as ‘Indigenous Practice’; instead what these practices deserve is an equal treatment with an understanding of indigenous epistemologies and philosophies. This can happen through the decolonisation of language. 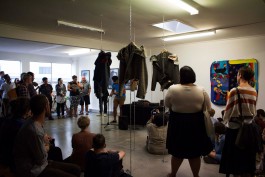 The reliance on the English language: the unapologetic musings of a polyglot, Léuli Eshraghi

Léuli Eshraghi’s decolonising framework proposes thoughtful ways to articulate and consider contemporary art. Eshraghi is a Sāmoan-Persian artist, curator and writer based in Melbourne. His framework prioritises Indigenous languages, uses macrons and toponyms, stepping away from homogenising terms and refusing to sacrifice culture for mainstream consumption. It is easy to mistake this framework as a caution toward political correctness. In actuality it is a very thoughtful model of how we can decolonise our own thinking toward making and viewing.

Eshraghi and Lucreccia Quintanilla experiment with these ideas in the article Trueno Tropical Faititili a Motu Tropical Thunder[9]. The article starts out as a haphazard conversation; the transcription and reedits are forged into what feels like a script for a pilot television show. By the end the article has become a thought-provoking political statement.

They seamlessly weave from ‘…[Australia] should be used to, and comfortable with, the idea and reality of thousands of cultures, languages and world views by now’  to conversing in Quintanilla’s El Salvadorean mother tongue of Spanish[10]. While the act of weaving languages could be seen as a symbolic gesture, in this instance it’s more political. Even with no knowledge of Spanish the transition seems natural, your immediate understanding becomes secondary to the situation, instead highlighting the importance of not privileging English. A brave stance.

Ironically, in this case, both the languages are colonial. From 2007 till 2010 Eshraghi choose to write mostly in French with a goal to later write critically in Sāmoan and Te Reo Māori.[11] As Eshraghi points out, most creative and critical writing occurs in English and French, placing our ancestral epistemologies as ‘Other’ to ourselves. This is further highlighted by his preference for ‘Oceania’ over the European term ‘Pacific’, continuing the thinking of Epeli Hau’ofa[12]. Eshraghi says, ‘For me, “Pacific” is a politically, religiously and culturally biased term, due to colonial impositions, ever since our ocean was first named Mar Pacífico by Fernão de Magalhães.’[13]

Indigenous communities no longer need mediation; we are capable of our own naming, speaking and doing; it is our views of contemporary art norms that need to expand. Eshraghi & Quintanilla argue that, ‘We don’t necessarily have to “represent”, to “translate” our work and/or cultural/linguistic background to a broader Australian audience.’[14] Expressing multiple ways of being not only steps back from self-homogenising systems but opens up how connections can be made. The key is not to fall into the trap of creating superficial understanding, because ‘we are all suffering a dumbing down of cultural content and delivery.’[15] 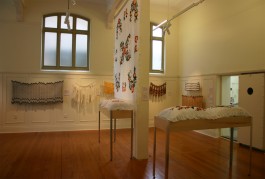 Privileging the Indigenous: The curation of Kolokesa Māhina-Tuai

Much like Eshraghi, curator Kolokesa Māhina-Tuai has established a curatorial practice which favours Indigenous modes of thinking and making as contemporary art, refusing to distinguish differences between the English terms ‘art’, ‘heritage’ and ‘craft’.

Nimamea’a: The fine arts of Tongan embroidery and crochet at Objectspace Auckland in 2011 exemplifies the prioritising of Tongan terms to assert Tongan practice. Curated by both Māhina-Tuai and Manuēsina ‘Ofa-Ki-Hautolo Māhina, this exhibition has been Objectspace’s only major project focused on Tongan making[16]. The curators’ essay explores solely Tongan concepts of fine art to articulate this mode of making. No comparisons are made to what we refer to as contemporary art histories. Instead, through confidence of Indigenous articulation these practices are afforded a place within a gallery context.

What Māhina-Tuai and Māhina do here is actually prioritise Indigenous ideas over our pre-established Euro-American art historical views, confronting our lack of knowledge. The curators acknowledged that ‘the use of such terms to describe Tongan art imposes foreign concepts that are in opposition to the conceptual framework of Tongan art and results in the compartmentalising of art forms which can lead to misunderstanding and misinterpretation.’[17] Not only does this privilege Indigenous knowledge, it also complements the work by honestly respecting both the makers and the audience. The essay was published in Tongan and English.

Furthermore, Māhina-Tuai enacts a practice to counter the ‘pan’ mentality. The old fashioned ‘splitting’ of the world into East and West has long been a way of characterising culture, centring a place and viewpoint that should never have been centred.[18] This dichotomy has become a key part of Western politics and been used to study management, linguistics and religion. Not only does this homogenise cultures it creates artificial regional unification, allowing single voices to claim authority for many claiming the ‘non-Western’ as Other.

Like Orientalism, Pan-Pacifying is something that Indigenous practitioners need to constantly question and combat. In this instance, Māhina-Tuai and Māhina’s clear distinction of Tongan terms to articulate Tongan art is a clear acknowledgement of the unique culture, where as the statement from the Objectspace Director claims this exhibition to be the ‘first major project focused on making from the Pacific’[19], highlighting the subtle but necessary language distinctions. This distinction of culture is key to counteract the Pan-Pacifying and the global homogenising views that are engrained in our cultural classification. 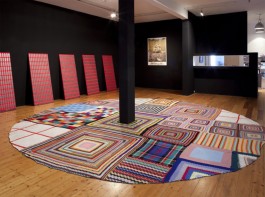 Indigenous vs Indigenist: The curatorial activism of Stephen Gilchrist

Stephen Gilchrist, Associate Lecturer at the University of Sydney and Visiting Curator at Harvard Art Museums, theorises about Indigenous curatorial practice by exploring the concepts ‘Indigenous’ and ‘Indigenist’. Like Māhina-Tuai, Gilchrist reminds us that many practitioners exhibit through ‘cultural’ institutions meaning Indigenous life, art and culture are inseparable[20] from their 60,000 year old cultural practices.

People seek to define indigenous curation through the roles of ‘Indigenous’ curators and ‘Indigenous’ spaces within our institutions. What is often overlooked – and which Gilchrist highlights – is that Indigenous curation is an integral part of Indigenous practices and has been for thousands of years. It is through this lens that Gilchrist explores curation as a way of breaking down the us-them dichotomy. Gilchrist confronts these Western elite barriers by curating culturally resonant spaces. Reconfiguring customary storytelling techniques, culturally resonant approaches are woven into modern modes of museum presentation through lectures, supplementary texts and labelling.[21]

Gilchrist’s 2009 exhibition Octopus 9: I forget to forget at Gertrude Contemporary, Melbourne[22] explored linguistic, historical, iconographical and psychological recovery of generational trauma in post-Apology Australia.[23] The key to this show and perhaps what all these practitioners are highlighting is that indigenous issues don’t just affect Indigenous peoples[24]. The inclusion of a non-Indigenous artist, while it may seem like a token contradiction, was actually an acknowledgement of this. The merging of art histories through contemporary curation suggests an alternative to the autonomous Indigenising of spaces which our institutions seem so fixated on. This simple action of inclusion seems like a logical step to breaking down the segregation indigenous practices from wider contemporary art so why does it not happen more often?

There is some responsibility as an audience to open up our perspectives of viewing. What keeps art interesting is the continual learning, afforded by our unique perspectives and places in the world. But in this situation the passive viewer has little control over the articulation of Indigenous practices, rather submitting to the experience that was on offer.

It can be argued that Eshraghi, Māhina-Tuai and Gilchrist all use their practices as a form of protest. Their practices have become a mode of cultural activism, not necessarily by breaking new ground but by exploring the social practices of our Indigenous communities. Of course, there are many ways to make art in the world and there are thousands of different art histories, yet the dominant lexicon of art seems to fit only one of these interpretations. Indigenous cultures have been exhibiting, curating and making for thousands of years. Today, in a multicultural society with engrained notions of class and race hierarchies, the underlying question is how we maintain the integrity and multiplicity of all art.

Her writing is published on forums such as EyeContact and Circuit as well as in print for various publications including essays for exhibitions; Pacific Materiality, Studio One Toi Tu and Emory Douglas, Mangere Arts Centre. Lana is currently editor for New Zealand based art criticality website #500words www.hashtag500words.com.