Angela Goh’s Scum Ballet was a remarkable feat of contradiction and harmony. The hour-long choreographed performance effortlessly engaged with ideas surrounding femininity, mysticism and violence. Conceived and choreographer by Goh and performed alongside Eugene Choi, Ellen Davies, Verity Mackey and Ivey Wawn; Scum Ballet was commissioned by and performed at Campbelltown Arts Centre on the 24th and 25th of November. In a distinctive mix of contemporaneity and classical themes, Goh’s truly unique approach to a conflation of dance and contemporary performance art practices was full of contradictions; yet seemed to find accord as the performers used their bodies as tools of interaction, not only with one another, but with space and audience.

Scum Ballet achieves a patchwork of juxtapositions which subvert classical tropes of gender performativity. Goh continually surprised and engaged audiences through a choreography that married moments of tenderness with an awareness of heightened risk, danger and violence. A particularly poignant moment came as the five female performers sat in the positioning of a classical painting and tenderly caressed one another- with a series of sharp knives wedged between their fingers. Moments such as these, created a tension that at once referenced the gentle legacy of the classical ballet performances of which this was inspired, and the subversive conceptual underpinning of the work- Valerie Solanas’ 1960’s SCUM manifesto and a wider canon of feminist thought.

Inspired by the mystical undead matriarchs, ‘wilis’ of the seminal 19th Century French ballet Giselle, the five performers induced a sense of the surreal that suggested spectators had merely stumbled upon a spontaneous, impromptu gathering. Though undeniably, excruciatingly rehearsed, the finely resolved performance was convincingly organic, allowing the contradictions of force and fragility to develop into an at times visceral viewing experience.

As the performers danced delicately across the space (on one occasion tackling no mean feat of performing a bourree in Adidas slides), they wielded planks of wood, and threw knives into walls to the overwhelmingly loud, deep beats of the musical soundscape. Such a juxtaposition of intensity and fragility was a truly disorienting experience, beckoning the audience to acknowledge dance, as Goh describes “as both a form and a force.”

The magic of Goh’s performance came through its straddling of intentionality and organic movement, the result of which warped any sense of real world time. The speed of the performance was constantly in flux yet invariably measured and intense, at once both effortless and planned. The violent action of conflict and fast beats were complemented by the careful consideration of all parts of all five performers bodies at all times. Such a dichotomy in expressions of control and performance, revealed a thinness of gender and power constructs by reducing them to mere surface costumes- manifested literally in the mismatched, successive costume changes of ‘impractical’ ‘feminine’ items of clothing, paired with utilitarian work boots, cargo pants and basketball shorts.

The intensity of the choreography was heightened through an unflinching gaze upon the audiences by all five performers. Inspired by the eerie gazes of Giselle’s undead ‘wilis,’ they continually stared into the rows of spectators, effectively deconstructing the connotation of subject/object relationships and consequential notions of female passivity. In returning the audience’s gaze, the performers maintained agency in which to reclaim their movement and action as specific and intentional. 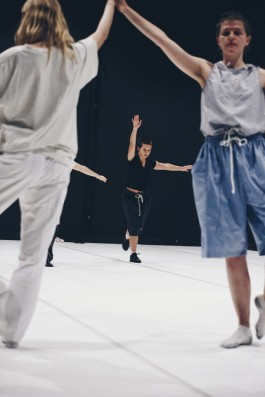 This reclamation was sustained through the seemingly gruelling physical nature of the performance. This intense physicality ironically not only spoke to a narrative of performance art which explores the limits of the body, but also the much more common, and not so radical, gruelling nature of dance. The transparency of such intense physicality reached a climax as the performers threw themselves repeatedly against a mat on the floor to the tempo of guttural, repetitive music. As the audience winced imagining the pain of the performers, the artists maintained their forceful intensity in a paradoxical heightening of chaos and control, inviting a consideration of the relationship between the female body and cruelty.

Goh’s Scum Ballet seamlessly navigated a surreal and dynamic world in flux. A continual shift of mood and circumstance did not seem at all disjointed, but rather provided complementary juxtapositions in which to explore the perceived binaries of femininity and power; construction and destruction; tenderness and violence; reality and the supernatural. Perhaps the most significant achievement of the performance was in the refined simplicity of representing such complex, dynamic themes. Goh presented her audiences with a subversive mysticism that effectively and concisely carried its conceptual undertones.

Isabella is a Sydney-based arts writer and curator, currently completing a Bachelor of Art Theory at UNSW Art & Design.

Isabella is a Sydney-based arts writer and curator, currently completing a Bachelor of Art Theory at UNSW Art & Design.