MORE THAN BUMS ON SEATS

How much to say?

Artists Lee Wilson and Mirabelle Wouters have been collaborating since 1998 and, through their enterprise Branch Nebula, have been making socially and politically engaged interdisciplinary performance work since 1999. On the Branch Nebula website[1] under ABOUT, Co-Artistic Director Mirabelle Wouters, reveals her alternative upbringing in Belgium and her discovery of jazz ballet, accompanied by retro photos from babyhood to luminous young dancer. Co-Artistic Director Lee Wilson (revealing much more perhaps), offers as his entry, ‘Still needs to write his blurb.’ There is, however, a photo of a toddler striding along a concrete suburban footpath, wearing oversized shorts (or is it a skirt?) with an EH Holden station wagon parked on the grass verge across the street.

I went to talk to Lee and Mirabelle at the Branch Nebula office, amid a cluster of creative spaces in the Myrtle St Studios, Marrickville, Sydney. My intention was to speak about their upcoming work Stop Go, in development for the 2018 Keir Choreographic Award. Contrary to his laconic website entry, Lee was garrulous while Mirabelle made observations at insightful interludes throughout our conversation. The co-creators prefaced our chat with the revelation: ‘… we don’t want the audience to know too much beforehand… we’re trying to keep it ambiguous, so we don’t know how much to say.’[2] This did not augur well for me but I assured them it would be fine to proceed. Following our conversation, I decided that if I can’t say what it is, I can ask: What is it like? Where does it ‘sit’? So, I have constructed a bricolage of entries. It’s not this, but it’s like this. A record of what’s public, an evocation of Branch Nebula’s choreographic approach for Stop Go, and a nod to a larger context and performance history.

To begin, there is a title and Branch Nebula’s carefully constructed publicity blurb:

Stop Go opens Branch Nebula’s choreographic toolkit for public inspection and use. Any performance is in essence just one thing after another, and the order in which these things happen is infinitely malleable. Artists have some expertise in choosing the things and assembling the sequence, and audiences have a right to expect this expertise to be on display when attending the theatre. Stop Go respects this implicit contract and provides the audience with everything they need to create a satisfying night, including:

And while the human will be foregrounded throughout the performance, there will also be technologies never before seen on stage.

There is also an image: 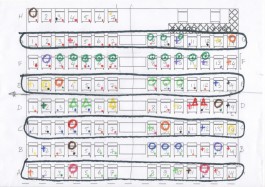 Mirabelle: Our choreography is based on the idea that the audience are always in the work, in the theatre, they always have tasks to do…[5]

Mirabelle: … using the theatre as a site using everything that comes with it – the building, space, people who work in it – who works where and does what? And how does it function when you’re the audience? And what’s your role when you come in? It’s all very organised, it’s about trying to break that apart or subvert it, the audience has a role to play and they know they applaud at the end and they sit down and be quiet…[6]

Lee: We will demand a little of them but not too much just enough to highlight the work and, that we will all have to pull together to produce a ‘choreography’.[7]

Mirabelle: This project extends our ongoing interest in choreography…

Have you ever been experienced?

What to buy for the person who has everything? An experience, an action adventure, a memorable moment, a night at the theatre…maybe even a participatory performance experience.

The term ‘happenings’ brings to mind being ‘part of the action’, or possibly being put out of your comfort zone by an unpredictable, thought-provoking experience. ‘Happenings’ are related to a lineage of avant-garde performance, stretching from Europe in the early twentieth century to New York in the late 1950s through the 1960s, including the works of Allan Kaprow and Fluxus events. Happenings often fiercely critiqued contemporary society. For Allan Krapow’s 18 Happenings in 6 Parts (1959), performed at the Rueben Gallery in New York, he decided:

‘… that it was time to increase ‘the “responsibility” of the observer’, Krapow issued invitations that included the statement ‘you will become a part of the happenings; you will simultaneously experience them.’[10]

For 18 Happenings the visitors/audience/spectators/participants were noted as part of the cast in the program notes. This interest in shifting the role of the audience to a participatory context was embraced by a number of key postmodern dance artists working in New York at the time.

For the first performance of Simone Forti’s Rollers (1960), also at the Rueben Gallery in New York, audience members were actively involved in the mechanics of the object-centred happening. While performers sat in plywood boxes on wheels, two audience members dragged and pulled ropes manipulating each box and their passengers around the space like dodgem cars:

‘[For] Roller Boxes, we just had two boxes because it was a teeny little gallery, and that was the only time that the audience pulled the ropes. And they just went crazy with it. Patti—at that time called Patti Oldenburg—was in one of the boxes, and I was in one of the boxes, and we were supposed to be singing single tones. We ended up screaming. It was very exciting.’[11]

Since the 1990s artists in contemporary performance practices have been interested in subverting the privileged theatre space and giving audiences agency through various participatory processes. As an audience member, I have been privy to a number of memorable examples of participatory performance art. Unlike those hideous audience participation moments where you retreat in your seat sending out don’t pick me, don’t pick me vibes, these experiences, most of which took place in Sydney in the 1990s, were inclusive, we’re all in this together, experiences.

During the 1990s, Performance Space was a venue that directly engaged with the politics of spectatorship through the works it supported, engaging artists and audiences in a more active relationship and various types of participatory art. In Lock Up (1994), the Post-Arrivalists held the audience hostage, locked them in the theatre and left them there.[12] I was exhilarated but slightly anxious. The Sydney Front’s First and Last Warning (1992) required the audience to swap their street clothes, at the door to the theatre, for black nylon slips (male and female alike) – simultaneously embarrassing and hilarious. After a series of reconfigurations of the performer spectator relationship the audience worked together with some of the performers to build an impressive wall out of cardboard boxes that divided the space.[13] I remember a sense of achievement, strangely satisfying. Interdisciplinary performance company Open City provided performance environments for their spectators where one could choose how you wished to engage; where to stand in the space, what speed you preferred to move through the performance, what to listen to and what to look at, when to stop and when to go. (Sense (1993), Sum of the Sudden (1993), Shop & The Necessary Orgy (1995)).

Branch Nebula follow on from these explorations and promise to take them in a different direction with their propositions for the audience in Stop Go!

Lee: We will offer the audience agency while fully aware, that we the artists, are creating the rules and boundaries of that agency within a framework dictated by the institutions Keir Foundation, Carriageworks, Dancehouse and other funding regimes…[14]

Branch Nebula are deeply invested in the audiences’ experience. A number of their previous works point to the aims and objectives behind Stop Go. They consistently create experiences for audiences, which challenge cultural conventions of mainstream theatre and dance. More than putting on a show or sharing their practice they aim to create accessible, yet unexpected experiences, blurring the lines between the performance, reality, work and play, poetics and politics.

For example, Snake Sessions is an ongoing project that involves a site-specific week-long residency in a skate park, a collaboration devised to empower local users of the park. Through improvisation and workshops, they create and present a work that aims to build ‘a performance that responds to who is in the space, the elements and challenges of each skate park; enjoying the rapport that can develop through shared physical activity and each individual’s highly specialised skill’.[15]

a theatre place, a space, architecture

the work of choreography

a high degree of logistics

rules to be broken

movement impulses, choices and free will

There will be transformation.

This will take approximately twenty minutes.

You will be more than a bum on a seat.

Mirabelle: We will invite the audience to be more than bums on seats…

Lee: We don’t know if it’s going to work yet…we ask ourselves the question: could this work happen if the audience wasn’t there? That seems important to us…

Julie-Anne Long is an artist-scholar and Senior Lecturer in Dance and Performance at Macquarie University. She works in a variety of dance
contexts as performer, choreographer, director, producer, mentor, dramaturg and curator. Julie-Anne has a significant solo practice, as well as a more communal, collaborative way of working with other like-minded artists within the diversity of Australian contemporary performance.