Do I really want to go down this rabbit hole of reproductive labour, creativity and sexuality, of fecundity and root chakras, where the mid-career female artist may exclaim, ‘my artworks are my babies’. Perhaps it is safer to burrow sideways into the caverns of biological reproduction. Follow me if you will.

Last century, producing the commodity of a baby, a child, an heir, a lineage for the infertile, was the invisible task of single young women. Sluts, whores or just good girls gone wrong; shamed, their promiscuous unwed pregnancies testified to moral inferiority. Removed from the sight of civil society and sent to live in work houses mostly run by religious orders, they toiled in laundries, fantasised about happy futures, and practiced the art of creative writing by penning fictional letters home.

These disappeared females laboured to deliver their child, then returned home to simulate virginal marriageability. The children they produced were often never seen—whisked away at birth. Questionable origins of these bad seeds were magically redeemed by childless couples who would provide two parents in either Christian or wealthy homes. Subterfuge, silence, and secrets are the hallmarks for adoption.

Sexual revolutions and contraceptive choices changed this landscape, reducing the number of babies available for allocation. In 1973 the Whitlam Government’s visionary Single Mothers Benefit enabled women to make a life with financial support for their children. Two years later Australia participated in Operation Babylift, literally stealing children, many of whom were not orphans, as spoils of war from a devastated Vietnam. The Women’s Weekly lauded this as a courageous humanitarian action, running features on the displaced children who grew up visibly different in predominantly white Australian families.

Adopting children from other cultures was something of a celebrity fashion. Mia Farrow managed to secure ten with contestable outcomes; Angelina Jolie acquired three before she biologically reproduced; even Ally McBeal and a Spice Girl got a baby. However, over time international baby supply dwindled, as it became obvious that many of the children procured by adoption agencies and child traffickers for the insatiable western market already had families. Borders tightened to all other than the rather wealthy.

Then in 2013, Prime Minister Julia Gillard apologised on behalf of the Australian Government to people affected by forced adoption or removal policies and practices. She left her standing ovation to a third Labour leadership spill by Rudd supporters, and, to quote The Guardian that day ‘the media lathered in excitement at the prospect of seeing her pulled down’. The Adoption Apology hardly got a mention on the evening news.

That Apology promised $5 million for support services for affected families and to help biological families reunite, which on delivery over the ensuing years, disappeared into the annals of Medicare with very little benefit to those affected by adoption. It also set aside $3 million for an art exhibition. Initially excited, adopted artists and authors soon painfully realised that the commitment was not to engage professionals but to fund an open call web site and exhibition designed and administered by bureaucrats of personal stories, memorabilia, therapeutic images, and documents.

The resultant exhibition Without Consent: Australia’s past adoption practices, produced by National Archives of Australia is touring nationally till 2018. No creative professionals affected by adoption that I know contributed to it. Some disappointedly discussed what could have been, then continued on many varied practices exploring the legacies of adoption of trauma, identity, isolation, loss, and grief.

Meanwhile, seduced by the celebrity of Deborra-Lee Furness and Hugh Jackman, and embarrassed by his own brush with handing a child over for adoption at 22, then Prime Minister Tony Abbott diverted millions to set up the Intercountry Adoption Australia Agency to assist overseas adoptions, while simultaneously removing millions of arts funding. I’m not suggesting they are directly related—rather indicative of political priorities.

Like everything else today, it’s easy to move messy tedious jobs offshore. If you can pay a villager in Borneo for one of their kidneys surely it’s a simple matter to rent a developing world womb. The Surrogacy Industry advertises ‘family building’ for opposite-sex or same-sex couples as more affordable and achievable than ever. Historical subterfuge aside, the fertility market is still drawn along the lines of gender, class, and race.

This fraught proposition evades the moral and ethical rights of the child, who as an adoptee, surrogate, or donor child will most likely have developmental post-traumatic stress and immune disorders; a higher incidence of addiction, mental illness, and suicidal ideation; and oddly a higher incidence of being murdered by their adoptive or commissioning parents.

Merely two decades ago when Dolly the sheep (cloned from a mammary gland and named after Dolly Parton) was made, genetic engineering seemed like science fiction. Patricia Piccinini based her practice around these simultaneously fascinating and disturbing issues with early works like the Genetic Mutation Simulator (1994) and the iconic Lump (1996). Bioarts emerged, contemplating the ethics of creating life; perfectly exemplified when one of SymbioticA’s  ‘victimless leather’ coats (made by growing living mouse stem cells) exhibited in 2008 at MOMA New York had to be killed by a curator. 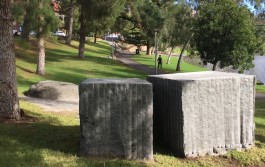 Now fusions of reproductive labour and science create three-way children. A woman may carry a donor fertilised egg of another woman—a foetus she bears no relation to. Or DNA of three adults combines into a single embryo for implantation, purportedly to reduce susceptibility to certain diseases—yet similar animal experiments lead to genetic mutations, illness and premature death.

And now we are tunnelling up—breaking surface between two rather large blocks of black rock on the banks of the River Torrens in Adelaide. Actually it is one very large rock carefully split by a man with a steel rod and a hammer over the period of an hour.

This is the South Australian commemorative public artwork for past forced adoption practices. Titled The Space Between, it was designed by public artists CHEB—Deb Jones and Christine Cholewa, to accentuate the tension between the two ragged surfaces of split rock—the unreachable space between the mother and removed child.

Commissioned with a meager $50,000 from the SA Government, topped up by a $10,000 Arts South Australia grant, the split rocks on gravel footings fall slightly into each other—shifting the tension of the work to its river facing polished inscribed face. Counter balancing this is a substantial sitting stone surrounded by pavers engraved with fragments of text—forever searching / endless sadness / different… A small section of the boulder is polished to reflect where many hands have touched or will touch—a tangible point of connection.

This affective material memorial is more mausoleum—a burial chamber for pain and grief, for anger at past and continued injustices, at secrets and lies. It holds the collateral damage of considering children a lifestyle commodity; the invisible paid and unpaid labour of women’s wombs; the ongoing emotional and physiological issues of adoptees, donor and surrogate children, and the kidnapped.

Many, mostly women, have over decades been involved in bringing this important artwork into existence by challenging attitudes and legislation, only to become invisible in single outcomes. I honour them, their dedication, passion, courage and unpaid labour. There is only one other memorial in Australia. We need more, so that we are publicly reminded of the injustice which accompanies socially reproduced practices of family building—of procuring babies offshore, removing infants from mothers, and erasing identity and heritage from children.

Melinda Rackham is an artist and author affected by adoption. She and Liz Hein from ARMS were unpaid members of the Adoption Memorial Steering Committee in 2015-2016.

Artist and Author Dr Melinda Rackham is a pioneering web artist, who wove tales of intimacy and identity online when the internet was new.  As a cultural producer, curator and writer, she widened audiences for new artforms and engaged with the broader spectrum of media arts, art and science, making and design practices. Melinda’s is currently creating cross media immersive environments and public interventions. She writes poetry, socially informed texts and fictive memoir; and continues to interrogate the philosophies and processes of interdisciplinary arts practices.