Confronting at first, Cigdem Aydemir’s Bombshell (2013) is a performed artwork where the artist’s body is fully covered – in all black – wearing a Niqab that blows in all directions. The fabric moves to expose more black clothing underneath and even sees the fabric draft over her eyes. In the background is a stage of ominous dark clouds and sounds of thunder that employ a powerful and visceral intensity. If you are thinking this sounds like a gloomier and political version of Marilyn Monroe’s infamous dress blowing scene from the Seven Year Itch, you would be correct.

In the original film scene, Monroe lets the breeze from the subway blow her white form fitting dress as she is standing on the street over the train vents. She asks her male counterpart if he feels the breeze, and “isn’t it delicious?” In her not-so-typical artwork and rendition of Monroe, Aydemir (a Sydney-based artist) captures the iconic pop cultural moment through a feminist lens that explores the controversy surrounding the veil and veiling practices. This particular work of Aydemir’s is one that not only saw her winning the Redlands Konica Minolta Art Prize in 2013 for emerging artist, but also first drew me to her larger body of work. It is through her art practice of using installation, performance and video art that Cigdem gives audiences an artistic entry point into transcultural communication, feminist ideologies and decolonial perspectives.

When I sat down to speak with Cigdem, she greets me with a warm smile and as we sit to chat, we drop our layers of jackets, mittens and scarves, this would foretell the issues we unravel in our interview as we also think through the ways in which her art is driven by producing works that critique – often with humour – relations of power that she has experienced, seen and heard. Our shared interest in gender and decolonial theories led our conversations and as we chatted about inspirations such as Tony Morrison, Audre Lorde and Sara Ahmed, it was only fitting that our meeting took place in the women’s section of the Newtown Library. Cigdem is fond of Ahmed’s ideas and prolific writing style. She takes inspiration from Ahmed, as she is enthused by the theories and ideas that Ahmed allows us to discover in thinking about feminism and racism.

We begin our conversation with the word ‘untangle’ and that is what we do. Cigdem’s works question power and privilege and the invisibility of colonialism. In Plastic Histories, she problematises masculinities and queers monuments by wrapping them in pink plastics. Preparing these installations would not have been an easy task, as Aydemir was dealing with the outdoors to tightly bind larger than life male figures. Wrapping them in plastics is a way for Aydemir to express that our memories are shaped and moulded. She questions why we celebrate men’s achievements and seeks to decolonize these statues and their histories. More specific to her installation in South Africa in 2014 – where this installation was the first experimental art commission for the Vryfees in Bloemfontein –  she saw what this meant in the legacy of South Africa’s history where a decolonial lens is still necessary as remnants of colonial ideologies and histories are represented through statues. This is also represented nationally in her 2016 Plastic Histories that took place in Hobart for DARK MOFO. Aydemir notes that statues are invisible but remain as physical representations of racial and gender inequalities. More recently, we can think about her Plastic Histories installation in light of the controversies surrounding Confederate statues in the United States and the protests against statues and their racist histories that promote white heroism. She says of the United States context, “I love what is happening in the U.S., it is about time…How do we celebrate genocide with these monuments? It is really silly.” Here in Australia, we can see that Cigdem’s Plastic Histories speaks to issues of racism that normalizes a turbulent colonial past. The ongoing debates that she draws our attention to in her art focusing on race, gender and difference that allows us to critique why these histories are so powerful to national imaginaries. 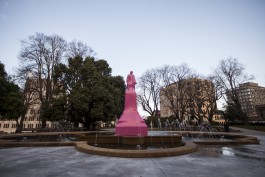 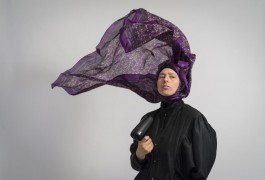 When I fangirl Cigdem, she is humble. She is not interested in being prescriptive in how people think about her work. She brings complexity into her works without being pigeonholed as a representative for a particular group. For example, she doesn’t label herself as a Muslim woman artist whose focus is only on the veil. However, she builds and extends on her exhibitions and works to think through different aspects of her practice to include wider audiences that speaks to shared issues from her own experiences. Her works have evolved to put into perspective controversial representations of women and how their bodies are often under scrutiny due to the heightened global fears of terrorism.

In this way, I connect with Aydemir because we are driven by a shared interest to change perceptions of the monolithic and dominant interpretations of Muslim identity. She even helps me unpack my own positionality of how I think about my own relationship to my faith as a Muslim woman. This is why I am excited by her art, because it offers agency through its use of humour, play and critique. She gives us a visual lens in which to view identity and identity politics. From this, we can delve into the politics behind what a piece of material does when it is worn a certain way and how, if like Aydemir illustrates in her art, by curling it in What If I Curl My Veil? And Other Questions (2016), blow drying it in Whirl (2015) and reconfiguring it in Extremist Activity (mount) (2012), we can find ourselves questioning our own positions and our involvement in others’ bodies and clothing practices.

The women’s library is about to close and the door shuts, but we remain seated on the burnt sienna couches and discuss the ongoing issues for Muslims in Australia. For me, someone who is unfamiliar with the Muslim terrain of this country, coming from Canada, I see Aydemir’s works as inspiration in how I negotiate my faith and how to think about it politically through art. Cigdem’s artworks capture the complexities of Muslim identities, the fact that her art can resonate with someone who is coming from outside of the Australian context is telling of its ability to cross borders and boundaries and speaks to the wider issues and connotations of Islamophobia.

We end our conversation returning to what began it, coming back to scholars like Sara Ahmed and how Aydemir sees Ahmed as a space maker for marginalised persons. I believe Aydemir’s art does the same thing. As an artist, Aydemir visibilizes and promotes resistance to dominant forms of oppression that impact marginalised groups and in this way her art practice also exemplifies activism. Her work takes art outside of the aesthetic and into the realm of the politically engaged that serves as encouragement for breaking down barriers. Aydemir notes, “Voicing of those things can be that sliver of hope” and I think we are hopeful in how art can be a form of activism and how it spans across cultures, communities and histories. As Cigdem unlocks her bicycle on Brown Street, I am still buzzing with the energy of our interview and how, even though there is still a long way to go in opening people’s minds to difference, it just takes one small step (or pedal).

Alifa Bandali is currently a Teaching Fellow at the University of Sydney. Her research interests include feminist ideologies and women’s experiences in non-profit/NGO work in Southeast Asia.

Alifa Bandali is currently a Teaching Fellow at the University of Sydney. Her research interests include feminist ideologies and women’s experiences in non-profit/NGO work in Southeast Asia.