ANOTHER (MOSSY) GARDEN: TOBY CHAPMAN IN CONVERSATION WITH BEN TERAKES

Ben Terakes and I are housemates. And in the way that sharing any living space with another person means a bricolage of furniture, books and trinkets, there are traces of Ben and his practice throughout the apartment. He once described his work as being on a domestic scale, and indeed, when you pass the living room bookcase, there, standing idle next to a copy of J.G. Ballard’s Crash (1973) is a clay, phallic object (dildo-like in size and shape) painted the colours (aqua blue and orange) of the National Football League’s Miami Dolphins, who, when Googled, appear better known for their cheerleading squad than the team itself. All of this seemed relevant to my discussion with Ben about pornography and contemporary art. Which is to say, Ben’s practice is both sprawling in its conceptual focus and deeply focused in its obsession with finding the sexual in the everyday. For the sake of some logic, the conversation began at some kind of beginning. 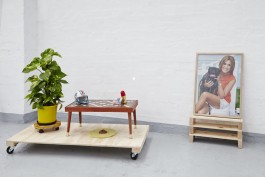 Ben Terakes: Ah yes, it caused heaps of problems. The college (Sydney College of the Arts) threatened to pull it down, as it was deemed offensive. Ultimately though, it was a great experience. Fellow students made badges and printed t-shirts with the slogan on it, and at least two lecturers vehemently defended the work. In the end, I had to make it a performance, in which we hung the banner at 6 pm on the night of the opening, so that at least some people saw it. Student services never ended up cutting it down though, a big storm hit the following night, so I’ve always joked that God pulled it down for them.

I think that work was extremely simple, nothing was thrown in to complicate it, like I do these days. It’s a proclamation of inadequacy not provocation. I don’t think it even really questioned social morals. I mean, most people just laughed when they saw it, some even patted me on the back, like we’d just played a game of footy.

But I certainly think the role of the artist (or at least some artists) is to act outside morality, or at least question social morality. I think the negotiation is as simple as ‘doing no harm’… then go ahead and do what you need to do. I’m really not sure that there are any parameters beyond that. 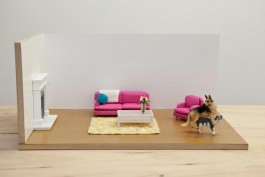 In terms of that show, I was totally captivated by this case in Enumclaw (2012) in Washington state in the US, where a guy died from having sex with a stallion. I’m sure everyone around me got really sick of hearing about Enumclaw! I think I had some sort of epiphany while I was researching the case. It was the first time I ever looked at the internet as a way of connecting people.

I guess I mean more than just through social media and other forms of communication. It really connects people, in a real sense. I totally understand that this can have negative effects on people and even the world, but the simple gravity of this connection is surely worthy of exploration. No doubt we will discover more about humanity through these connections than we’ve ever dreamed.

Researching cases like the one in Enumclaw has definitely broadened my personal definition of porn. If pornography is anything that gets someone off (I guess that’s my definition) then I think there is probably no end to the breadth of images to be found, and then again no limit to the amount of people who are connected via this content. It’s strange how I’ve never been interested in ‘internet-based work’ in the past and now somehow, I find myself in a position where it would be very hard to work without it. I still feel as if I’m not making work about the internet… but maybe I’m just kidding myself. 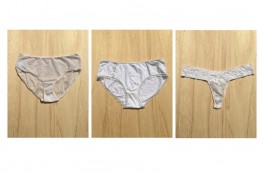 That combo of the domestic and the sexual can be a scary place too, I think this insidiousness is very important. You can only laugh so much before it all gets a bit uncomfortable. I try to emulate that in my work. 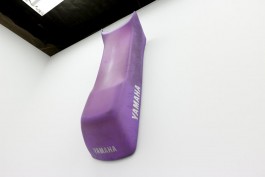 TC: You recently built your first website which includes a page titled RESEARCH. It contains a selection of images sourced from the Internet – women, rocks, asteroids, some furniture. Can you explain how you decided on this selection of images? I’m particularly interested in this webpage in relation to a concept that we’ve discussed before; the mental disease of Aphasia which affects individuals’ abilities to properly categorise subjects, images or objects. Foucault described the aphasiac as being so aware of similarities or gradients that they are unable to make distinctions or decisions, often leaving them literally unable to speak. How does this concept speak to your collation of images, and perhaps also a new work you are producing, PORNSTARS?

BT: I think the Internet inspires/forces this type of aphasia on the user. I began working in an office full-time a few years ago, and am exposed to a huge amount of web-based imagery because I sit in front of a computer screen eight hours a day. I began collecting images in lieu of making work in a studio—simple images that appeal to me on a certain level; mostly women, yes, but these don’t really reference pornography at all. The women featured here are always clothed and sit alongside other incongruous images; chimpanzees, famous boxers, asteroids, stars and even furniture. There is no way I could sit here and explain to you why these images are significant to me or each other. The only link is me, and the only reason they could possibly be read collectively as art is because I call myself an artist and they exist together only on my website.

I think your eyes are always searching for something attractive, something to hold your attention/captivate. And perhaps that’s the only reason these images are there, together.

BT: I think the act of looking or gazing is very important to my work, as I enjoy that voyeuristic aspect. But I also need to be watched; I like to have witnesses. I think to a degree all artists get off on that. I’m not so sure of how these images work at the moment. I’ve shown images of women sourced from the web before—Jennifer Love Hewitt/Kylie Gillies—they have been witnesses, I think, to the work going on around them. They are hard to categorise. They aren’t artwork, but they often HAVE to be around the work. I guess they’re forced to witness the work or the work being made, perhaps in lieu of an audience. I used to do a lot of live performance work – perhaps these celebs are around to watch now. I suppose instead of me or the paparazzi spying on them I am using them to spy on me.

TC: Thinking about another psychological position in your work, you’ve titled a forthcoming exhibition ANOTHER (MOSSY) GARDEN – a reference to Vladimir Nabokov’s Lolita (1955). Can you explain what drew you to this book, and in particular this excerpt?

BT: Humbert (the protagonist of Lolita) is a man, but he acts on impulse like a boy. There is a childish teenaged aspect to him that makes him more palatable to the reader; we sympathise with his lecherousness. The work I’m creating at the moment is problematic, in that it’s new, and I’m unsure how it’s all working together. I think the only tie that binds it, is the pubescent male. When speaking plainly, I think the teenage boy sees sex in everything, and every experience. And this sex is new and so complicated. It is potentially fun and funny, but is also scary and threatening. The joke could always be on you. I think these are all the things we’ve been talking about around my work at the moment. 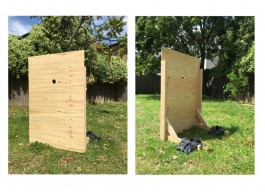 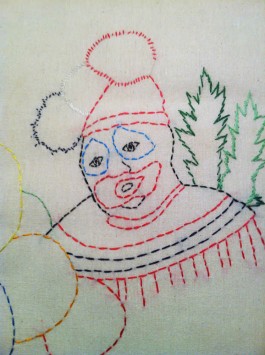 If you look at Paul McCarthy’s or Mike Kelley’s early performances, or more recently Tony Schwensen’s, they all have these hallmarks. They don’t put too much emphasis on anything other than capturing the action. They often use unadulterated domestic space to document the actions, which although amusing and even funny at the outset have somewhat threatening undertones.

As my own interest in making performance waned and my excitement for creating objects intensified, I became really interested in making sets or sites for action. Initially I built some theatre flats in front of an audience as part of a performance weekend at Artspace years ago. Since then my sets have taken many different forms. Initially, I made a small-scale diorama of a domestic lounge room in which a dog and a cat figurine copulate on the carpet. More recently I have made larger scale installations like Porno pond (or Emperor’s Garden Chinese Restaurant) (2013), which references the classic Chinese restaurant water feature as a site for a sex act. At the moment I’m building some portable glory holes, similar to simple theatre flats with a hole drilled out. They are stages for human interaction, and yet they aren’t real glory holes as they don’t serve anonymous sex. They just complicate the sex act, maybe they imply a barrier to the act.

In 2010 he completed a Masters of Fine Arts at Sydney College of the Arts. He has exhibited extensively in Sydney, interstate and abroad, including solo shows at Alaska Projects, Locksmith Project Space, and Mori Gallery; and group shows at CAST, Tasmania and Spielraum, Berlin. His work has been included in programs such as Peloton’s Performance Month, and the Museum of Contemporary Art’s inaugural ARTBAR, curated by Australian artist Justene Williams. Terakes currently lives and works in Sydney.

Toby Chapman is a curator and arts manager currently based in Sydney. Toby received a BA (Art History & Theory and Film Studies (Honours) from the University of Sydney in 2009. He has worked at a number of institutions in western Sydney including Casula Powerhouse Arts Centre where he was a Curatorial Assistant for the exhibition Nam Bang! (2008) which examined the ongoing impacts of the Vietnam War. Since then Toby has held positions at the Museum of Contemporary Art as Assistant Curator for C3West (2010-2013), a socially engaged project that sees artists collaborating with businesses and communities in western Sydney. During his time in the position Toby delivered projects including Angelica Mesiti: The Begin Again (2012) and Lara Thoms: Ultimate Visions – Monuments To Us (2013). In 2011 Toby joined 4A as Assistant Curator, Edge of Elsewhere. Since then, he has worked on a range of curatorial projects at 4A including Roslisham Ismail AKA ISE’s Jalan Jalan Makan Angin (2012); The Floating Eye: The Sydney Pavilion, 9th Shanghai Biennale (2012); and With or Without You, Lawrence Wilson Art Gallery, University of Western Australia. Beginning in 2013 Toby worked as Assistant Curator full time and has since curated projects including Vertical Villages: an artistic collaboration with ruangrupa ArtLab & Keg de Souza, 4A and the 15th Jakarta Bienanle (2013); Haze: Tully Arnot, Sarah Contos, Jensen Tjhung (2014); MASS GROUP INCIDENT (2015) (co-curated with Pedro de Almeida and Aaron Seeto); and James Nguyen: Exit Strategies (2015). He was the inaugural recipient of the NAVA Emerging Curators Grant (2010); participated in the 4A Emerging Curators Intensive (2012) and was a recipient of the MGNSW Curatorial Mentorship (2013).