sandstone is the colour of this coastline. jutting ochre cliffs, gridded by tide, layers built and broken by water. those colours remind me of Gariwerd. one place in particular with rock suspended overhead, an important site for Jardwajali. approaching Billimina shelter with visiting friends, silence falls. natural occurrences naturally incur silence. stunningly, they appear without explanation, no visible date of production. words like immutable approach some sort of meaning, but what use is that when we’re talking about things from before that will go on after.

it seems that as one thing ends another begins. the preparation for change is more difficult than the change itself. crosses my mind that at some point I won’t be here to see any more beginnings, yet right now the world is opportunity. the word is could: things I could do, places I could go, people I could meet. and when endings have occurred in my life – or to others around me – I have kept going. out of necessity and habit. sometimes we are told to take comfort in the fact that it will all continue on without us.

I go to the mountains and know they have already outlasted. that’s why we fall quiet when we are atop them. remnants of the ancestral around us always. layers of earth know this better than I can say. that’s why I love the coastline — you can see those layers laid bare and unprotected. to peel back the layers of the earth and intervene: these are human attempts to make a lasting impression.

long weeping stains of ochre and rich deep brown umber. the expression of a cut, a wound, a sorrow, a scar. An expression also of sorrow, of emotion. The land behaves as a body – ngarradharrinya, to cry or weep.

Surface Bare I bleeding before and Surface Bare II bleeding after. these works documenting the cover-up: an attempt to deny what will remain. evidence of sites of mourning underneath the earth. drawing attention to what was there. 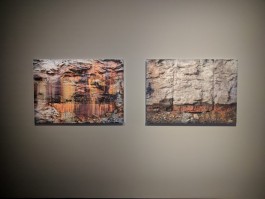 a serious descent. to capture spillage. of sorrow. land seeps for the people who have gone before, and worries for those to come. loss we cannot see. who was privy to the moment of rupture, who knew the country? these are previously unknown depths.

tracing time and patterns of place. those forms of extraction, imprinting, documentation. everything being of the earth or in tune with it. the wounds will heal, just let them. to zoom in for a minute: also sorrow for the selfish fact that I am temporary, just here for a minute.

here is evidence. a mourning.

at first glance these were just seven or eight different types of branches, sticks, arranged from shortest to tallest but moving into the room there was a glint, a glimmer, that drew you closer and revealed treasure hugging the knots of the branches. grown into the black and grey crevices and grown on top of each other, looking like a living fossil or playing with the idea of petrified wood. branches formerly known as trees petrified of what they had become. minerals cultivated by in a natural incubator beneath the ground and treated with a special mixture Nicole called her ‘special potion’.

I didn’t imagine the practicality of this ritual. the reality of using a shovel or a spade to hide these things underneath the earth so they could become like treasure. what do I know about making crystals? what can I say about resurrecting things? putting things in the ground?

once in primary school the lapidary club hid treasure in the sandpit. instead of class one morning, 50 children were let loose with small trowels to see what could be uncovered. it was pillaged by the older kids who proudly showed their luminous quartz nuggets. I remember returning later to continue the search. looking for something else. wanting there to be one more piece or maybe something else. mystery and hope are indoctrinated into the young. surprise and luck, too. 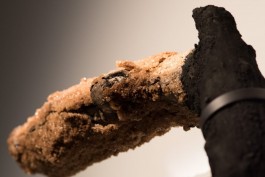 to reconsider what we now extract from the earth, how the land is used, what can be grown in or taken from a place, exploring the edges of materiality

…to further investigate concepts of place, tracing personal connections to kin and the material knowledge required to retrieve and revive the body

removed and in this sparse, open, white space you could forget that this was a process over several years. Nicole walking away for months, adding more to the crystals. returning to dig them up. add more. bury. I imagined something growing roots, spreading down into the earth. something really becoming a part of the earth — decomposing rather than growing.

‘we know how to sit in silence’

my cousin told us the story of when she made her own possum skin cloak. she went bush. trapped one per night in a cage. they didn’t like the cage. she learnt to skin them by herself — this was the eighties. in 2017 you can pay the pest control people to get possum skins. and she makes prints out of the skins: skins as canvas or as the print itself. occasionally I wonder if I’ll ever kill a possum? how will it feel to echo ancestral practices? will I abandon my 21st Century life to do it? and what if I do it wrong? now there are other ways to do it.

“it’s all about timing”, says Nicole. yes — moving with the seasons and knowing Country. it’s the way we do things. unwavering. with community and pride. gathering materials to make the work.

not all protest, but it is. to take the phrase, it’s timing. moving with seasonal knowledge to gather materials, stories. literal material made into materiality.

what do I know about this? it was tradition to begin life with a possum skin cloak, added to over time.

this brings attention to garments. fabrics, something that was new to our mob. the story behind this work one of family collaboration: Nicole’s grandmother shared a picture of women getting rations, collecting blankets.

darkest before the dawn was projected onto the side of the Australian Museum, just opposite Hyde Park. without disturbing the archival materials held within the institution it literally cast light on the building but made visible the presence of Aboriginal people on these lands. then the genetic movement…how I wish I had seen the film. wearing the cloak was Jessica Fing with an expression reminding me of something Paola Bella said. she said our people ‘know how to sit in silence’. there is not always the need to speak or say. there’s strength in simple presence.

sometimes I want to be drawn into the storm of modern life away from these slow ongoing things. I am unable to write about this materiality without the right frame of mind. it feels like even though it’s the spiritual underpinning of my life, sometimes I want to ignore everything that connects me to land. to people.

and it’s hard to tune into that quiet when there’s so much else going on. photographs goings on beneath the surface. the deep beating of country. treasure borne of the earth. the fabrics made of materials gathered from country over a certain time. the performance projected in the specific time and place as a ‘genetic movement’. gently reminding of where we are, where we stand. and now conversations happening not too far from where that projection was, that ask the question: how will we remember our first people. two years ago she was there, planting that seed, across from tony albert’s sculpture.

the elemental lives in Sydney, dotted across this landscape. you think it is all just the big city but it is here underpinning all that goes on too.

and then zoomed out there are the raw materials of a life. to be a human alive on a planet. everything else is man made. that there is an elemental thing at play. all life matter.

what else is it that I’m trying to say: I fear that I won’t have ever have the skills to say, uncover, or bare things like Nicole does. the inner strength of country. its regeneration, and to the other works that imprint the movements of culture and time, reimagining and retracing those patterns.

it is also about Australia’s failures.

these are moments that ask you to make yourself small. I am asking myself to be small in the face of these things. to know that like these, you will be superseded. super-ceded – is that a word? let the earth overtake me as it wants to. head spinning like asteroids, like the rocks that began us, the middle of our planet, it is connected, I promise. don’t you let it not be connected.

Susie is a writer, multimedia artist and descendant of the Wergaia and Wemba Wemba people from North Western Victoria. Her practice is concerned with the distances between place and people, themes she explores through poetry and media-based works.