ADRIAN GEBERS ON THE WORK OF FRANCESCA HEINZ 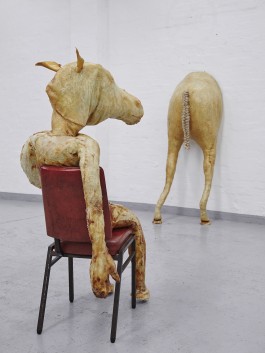 Peeping Tom (2014) is an installation of a stuffed latex sculpture of a Horse/Human hybrid placed in relation to Horse Arse (2014), another soft latex stuffed sculpture. It is the power dynamic that makes this scenario most comparable to porn, with the Peeping Tom figure clearly deriving pleasure from the vantage of his seat, while the other works present for him. The slouched posture open to receiving something, the hand casually resting on the thigh, ready all fulfill this dynamic. The scene, despite its simplicity, is highly sexualized; the abundance of latex functions as skin, slightly abject as the smoothness turns to a grotesque covering, the ponytail like a bow. The latex is semi-translucent, possessing a quality of human skin, but providing a glimpse of the paper stuffing that fills its form.

In her 2010 work Performance No.1 Heinz played with this power relationship again, forcing the viewers to become the Peeping Toms. The audience was only able to view the performance happening in the gallery through holes cut into the eyes of posters that concealed the front window.

The complexity of the performance would remain out of reach to the spectators outside, who were potentially unaware then of their own positioning as the Peeping Tom. The audience was a third participant, actively engaging in the performance by peeping through the holes. This fact would become more apparent in the later edited video work Part Four (2010).

Although outside, the spectators were still an audience, and the power dynamic was preserved for the spectator stealing looks at a situation from which they are excluded, but which was also somehow performed for them. Tied up or coerced into an action, Heinz would quickly forget the audience outside, but the camera remained and would catch the moments that even the captor missed. 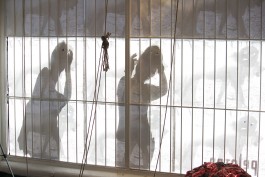 It is the spectatorship that brings any of these acts into the realm of porn. Real, intimate moments become pornography when watched, regardless of whether the spectatorship is intended or not. Amateur and “Amateur” pornography feed into this phenomenon. Genuinely amateur pornography consists of couples performing for a camera with an imagined audience. This audience, suggested by the presence of the camera, is typically limited to the couples at a later point in time. Pornography production companies have co-opted this, recreating the feeling for a now real audience as if they are intruding upon something intimate. Amateur pornography is now a category unto itself.

The relatively new phenomenon of sexting complicates this somewhat. Texts and images of a sexual nature are now frequently shared between partners (80% of respondents between the ages of 18 and 82 reported engaging in sexting in this study2). These images are of a private nature, intended only to be shared between partners, but at their essence they have an audience and are as such performative, creating an imagined narrative to be played out or played upon later.

Rather than commissioned portraits, paintings that are made to be seen by many have the effect of abstracting people into figures; images that stand for something, but not for the person in and of themselves. Heinz’s 2015 series, shown at The Young gallery in Wellington, keys into this. Heinz restaged canonical paintings, focusing on the female persona in each image. The figures are all presented wearing a horse head, but due to their photographic nature must be confronted as people. The works, which are based on Picasso’s Les Demoiselles d’Avignon (1907), go as far as to give each model a name, splitting the composition into five individual frames. The horse head creates a tension, contrasting the sexualised object with the idea of a person beneath it.

The choice in subject is interesting because of Picasso’s use of masks, particularly in the two figures to the extreme right whose faces appear to be behind African masks. The faces of the figures to the left are based on Iberian sculptures. The figures are oblivious to each other, looking only at the viewer. The reduction to planes and shapes done by the masks would be continued in the cubism that Picasso was beginning. The figures begin as abstractions of themselves: Heinz putting a mask up helps to reveal them.

Broadcast, the figures become images, one amongst many in an economy of images. The further an image reaches the more images it becomes comparable to. In April, in Missouri, 8 boys who received sexualised images from 16 girls were suspended after distributing them amongst colleagues and online. 2,400 of 3,000 respondents to a local Fox news survey believed the girls should have been suspended too, deemed equally guilty in the matter.4 It’s clear that current laws have not kept up with these changes,5 while these images are still potentially exploitative, they are of a different order to the non-consensual child pornography they laws were created for. The betrayal that the girls underwent, however, is a story too common for the world of pornography.

Cases such as the Missouri one reveal the gender dynamic embedded in pornography. It’s typically women being exploited rather than men, women who are shamed for their acts while the men are lauded for their role. But this too is undergoing a shift, thanks to the somewhat unlikely leadership of celebrities such as Kim Kardashian and Miley Cyrus. Cyrus, through an eclectic but curated Instagram feed goes lengths towards upsetting this power dynamic, shamelessly asserting her own position and advocating for campaigns such as #freethenipple that protested censorship of images.

Cyrus presents the idea of intimacy with her almost 30 million followers with a feed that is unlikely to be subverted. The larger audience in turn comes to terms with the difference between what they want from celebrities and what they’re used to expecting. Cyrus gives the audience exactly what they think they want, holding a mirror up to them, playing into the narratives created around her. But in this co-opting of the narratives the subversion becomes a submission too.

Ponytail (2014) is similar, presenting an almost context-less action performed for the viewer. A single monitor shows a closely cropped view of a figure dressed in a horse’s tail twerking for the camera. As a single movement, repeated in an endless loop, devoid of music, the action becomes abstracted, a simulation of a simulated sex act. The ponytail works in two ways; it provides just enough coverage to elevate the performance, making it more cabaret than stripper, but it also highlights the sexualised nature of the act. It says, “Don’t pretend otherwise, this is what you want.”

Titian’s Venus of Urbino (1538) strips Venus of her god-like qualities and presents her as human. Although no longer seen as a god, this frankness enables the eroticism of the image. Venus appears coquettish in such a way that the viewer could believe it applies to them. Heinz’s title of her appropriated work, Giulia Varano, is for the wife of the commissioning patron. It was for Varano that the painting would have been created. In Manet’s Olympia (1863), the figure is modeled by Victorine Meurent, herself a painter. So much of the discussion of these two paintings focuses on the dynamic between god and prostitute. It is often forgotten that the model is a real person. It’s part of this history that Heinz keys into in her body of work, substituting herself into the image wearing the horse head. It’s as much an interrogation into the representation of women as it is a study in how those paintings function. 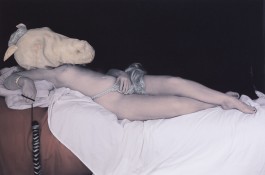 Adrian Gebers is an artist and writer.  From 2010-2013 he was a co-director of Peloton, a Sydney ARI.  His research focuses on the structures through which meaning is made and the particular history of Sydney’s art world.

Francesca Heinz was born in Christchurch New Zealand. Her practice incorporates drawing, sculpture, video and performance. In 2010 Heinz completed an MFA at Sydney University College of the Arts. She has exhibited in various New Zealand and Australian galleries, most recently at The Young in Wellington. Heinz was co-director of Sydney artist run initiative Peloton from 2010-13 and has curated Performance Month (various venues) since 2011. In 2012 Heinz exhibited in Gap Year at Artspace and was a recipient of the Australian Arts Council new work grant in the same year.