A MERCHANT, A MINER AND A BUSHRANGER WALK INTO A PUB: JOHN YOUNG ZERUNGE AND JASON PHU

Recent headlines on the results of the 2016 Australian census claim a first: the first-time Australia is more Asian and less European.[1] But history holds the misleading future-gaze of this kind of commentary to account. In the mid-1800s, there were towns in New South Wales’ Central West with more Chinese men than European. The anxieties and excesses of the White Australia Policy attempted to erase this, among other historical realities from Australia’s national imaginary, and the failure of our cultural institutions to adequately deal with its hangovers is well-documented. Even in 2017, the lack of Asian Australian representation in Australian cultural institutions is an issue that artists, curators and cultural producers continue to critique and call out.[2]

Commemorating early Chinese histories
Community groups, local historians, academics, curators and artists working in regional Victoria and New South Wales have long been active, in different ways, in recording, conserving, performing and remembering their early Chinese histories. In 2014 Sovereign Hill and the City of Ballarat commissioned Melbourne-based artist John Young Zerunge to develop a major public artwork to commemorate the region’s early Chinese histories at Len T. Fraser Reserve, the former site of Ballarat’s Old Joss House and nearby some of the area’s first Chinese campgrounds. Since 2012, Young Zerunge’s research has investigated the Chinese diaspora in Australia through his ongoing History Projects series. This research formed the basis of Open Monument (2015), a landscaped structure adjacent to the Ballarat City Skate Park, featuring a grid of 33 stone panels laser-etched with images of archival photographs, documents, and fragments of text: names, places, dates. 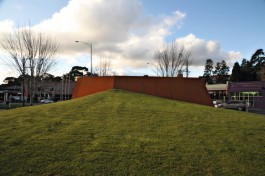 Jason Phu, The Ballad of The Widely Loved and Revered Aussie Bushranger Sammy “Pooey” Pu: The Successful Great Revolt Against the Southern Crossers by L.H.C., The Shooting Death of S.C.J.W. by a Chinaman, The Great Chase and Final Showdown at Barney’s Reef, The Trial of The Mute , The Execution by Hanging of Sam Poo (detail), 2015, ink, texta, coloured pencil on Chinese paper, 1050 x 60 cm. Bathurst Regional Art Gallery commission. Courtesy the artist. Photo: Document Photography.

Jason Phu, The Ballad of The Widely Loved and Revered Aussie Bushranger Sammy “Pooey” Pu: The Successful Great Revolt Against the Southern Crossers by L.H.C., The Shooting Death of S.C.J.W. by a Chinaman, The Great Chase and Final Showdown at Barney’s Reef, The Trial of The Mute , The Execution by Hanging of Sam Poo (detail), 2015, ink, texta, coloured pencil on Chinese paper, 1050 x 60 cm. Bathurst Regional Art Gallery commission. Courtesy the artist. Photo: Document Photography.

Young Zerunge’s elevation of the individual-over-collective experiences in his work, and connects the incredible diversity of Chinese Australian experiences today to a complex historical lineage. The vastly different trajectories of a powerful multi-lingual merchant, Lowe Kong Meng from Penang and uneducated miner Jong Ah Siug from Zhongshan in the 1860s are retrieved by Young Zerunge to bookend the broad spectrum of sojourners and migrants who journeyed to Victoria as a fledgling colony. Open Monument is a space to acknowledge their contributions, yet, as Young Zerunge describes, “[it] refuses to memorialise [..] to close history off to a finality”. [3] An unfinished timeline at the base of the monument positions formative moments in Australia’s colonial history in an unbroken line between past, present and future.

The failure of the archive – lack of historic records beyond court reports and disparaging newspaper articles – has been a condition of research for Young Zerunge’s History Projects, making the role of the artist, in reimagining the past, all the more vital. Jong Ah Siug’s diary, written from the Victorian asylums where he spent decades incarcerated, is a rare example of a first-hand account surviving. Even then, his jumbled notes, code-switching between broken English and Cantonese, is difficult to comprehend and open to interpretation.

Purposefully inserting fiction into this kind of historic reimagining has been a method embraced by Sydney-based artist Jason Phu, whose prints and ink and brush paintings are deceptively irreverent and self-deprecating in tone. In 2015, I worked with Phu on a group exhibition From Old Ground at Bathurst Regional Art Gallery. The exhibition commissioned new work from four artists, including Sydney-based Jess Bradford and Louise Zhang, and the late Beijing-based photographer Ren Hang. That year, Bathurst was celebrating its bicentenary – an opportunity to reflect on the region’s dark and complex history as Australia’s first inland European settlement.

In developing the exhibition Phu and I visited the Bathurst Historical Society, where we found old newspaper clippings on the Chinese bushranger, Sam Poo. Sam Poo’s story is contested. Accused of shooting a police sheriff, Poo was the target of a manhunt that ended in his imprisonment and hanging in the old Bathurst jail in 1865. In an epic ink panorama, Phu revisited the life of ‘Australia’s only Chinese bushranger'[4] covering pivotal events such as his passage to New South Wales, crime and trial, interspersed with the mundaneness of gold rush life and Google-translations of reports from the time.

The incompleteness of Sam Poo’s story lent itself well to Phu’s non-linear approach to narrative, which, with its deliberate inaccuracies, obvious gaps, elements of fiction and humour speaks to the lack of historical records available, not only about Poo but the thousands of other Chinese sojourners in the Central West at the time, whose stories remain untold.

Young Zerunge and Phu are currently developing a new project together with Sydney’s 4A Centre for Contemporary Asian Art. The artists have been commissioned to respond to the anti-Chinese riots at Lambing Flat (present day Young, New South Wales) in the 1860s. A pivotal historical episode, as the racist sentiments underpinning the riots contributed to the New South Wales Government’s Immigration Restriction Act that restricted the number of Chinese arriving in the colony, and limited the rights of those already residing. In short: a precursor to the White Australia Policy.

Beyond the important acts of local place-making that Young Zerunge and Phu are contributing to, the reach of their work transcends the regional contexts in which they came about. As artists who regularly work and exhibit across Melbourne, Sydney, Hong Kong, Chongqing and Beijing, their transcultural practices and relative mobility has the potential to link the local and national histories they are dealing with to the global Chinese diaspora, opening them up to different modes of interpretation, reception, value… success?

In an email, John reminded me that all of these projects are failures in their own way. Perhaps a condition of the complex legacies they are dealing with. As the doors of the Australian elite were never full opened for him, even the noble Lowe Kong Meng, failed.

[4] A roadside sign between Dubbo and Dunedoo marks the location of the capture of Sam Poo by police in 1865 with text memorialising him as 'Australia's only Chinese bushranger'.

Joanna Bayndrian is a curator and arts manager working across Sydney and Beijing. Her curatorial interest lies at the intersection of contemporary art, social history, urbanism and the politics of heritage-making. She was recipient of the Museums and Galleries of NSW 2014 Curatorial Support Initiative for From Old Ground (2015-16) at Bathurst Regional Art Gallery. Past curatorial projects include: Enter at the Intermission (2017) at Salt Projects, Beijing; island6 art collective (Liu Dao å…­å²›) (2014), Wondermountain (2014) and Love David (2013) at Penrith Regional Gallery & The Lewers Bequest, where she held the positions of Curatorial Assistant and Exhibition Project Manager (2011â€“2014), and Portable Domains(2015) at Firstdraft and Moments (2015) at Airspace Projects with artist network Astute Art Investments International. Joanna was a participant in the 4A Curators’ Intensive 2016 at 4A Centre for Contemporary Asian Art. She holds a Bachelor of International and Global Studies (Hons) from The University of Sydney and Graduate Certificate in Arts and Community Engagement from The University of Melbourne, Victorian College of the Arts.