A EULOGY FOR ARCHIVE_

In August 2015, Archive_ announced that it would vacate its gallery located at 5 Eliza Street, Newtown. This departure was attributed to the organisation no longer being a suitable tenant due to the operational changes set to occur within the building[1]. While this reasoning is vague and largely skirts placing blame, it remains the truth. The demise of the space is unfortunate, but you can always rely on the forward march of Sydney real estate to diminish opportunities for low-rent community spaces at alarming rates.

Archive_ is no longer materially active. It is a gallery without a physical space. However, acting as a space to facilitate the production and presentation of new work was never the total mission of the organisation. While the loss of this physical site represents a death, it need not be experienced as a total loss. 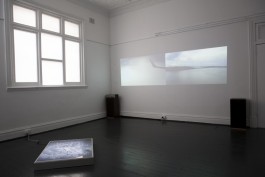 Like all artist-run initiatives that have come and gone, Archive_ has a history that survives in many forms. The story of Archive_ is not unique. Its ecology, however, was unique in the way that all organisms are: in its constantly shifting conglomerate of parts. A group of recent art school graduates started the space with all the optimism, energy, idealism and naiveté that such an endeavour requires. By the time we, the authors, came on the scene, Archive_ was over 20 exhibitions deep. A few of the original directors were moving on, and we had been on the fringes, admiring the space and its ecosystem.

Artist-run initiatives feed on passion. Artists, audiences, and directors activate the organisation and give it a community, a story and a purpose. Yet passion is volatile; it ebbs and flows. It is reliant upon some things that we have little to no control over, such as financial and home pressures, mood swings, interpersonal triggers and mental health.

Most of the time, we were carried along with the momentum of the exhibition schedule. Often, while part of the team at the helm of this organisation, we were uncertain about our roles and legitimacy. There were anxious moments. For one opening night, the artist had placed an ad in the local paper, advertising ‘A place to stay’ and the gallery’s address. This resulted in a collection of local rough-sleepers turning up at the door at 5.55pm. One director managed to explain the misunderstanding – ah, sorry guys, this is actually an Art show – copping abuse and derision and taking it with outward calm and stoicism.

Every now and then, amazing, exciting, inspiring work made its way into the gallery that reminded us why we were there. Exhibitions like Oliver Hull’s An Abyss II and Observation/Mediation curated by Katherine Rooke slapped us in the face with all the ideas that had been swirling around our heads. Other exhibitions felt more obscure or even bewildering. We didn’t like, or even ‘get’ everything, because that is the nature of collaboration. 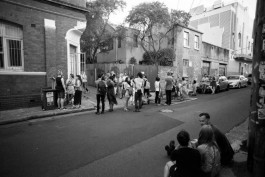 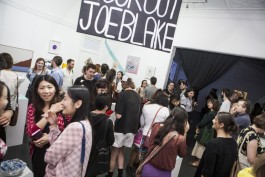 There were working bees where we ripped up vinyl flooring and revealed full sheets of 1920s broadsheet lining the floorboards. Bonding over uteloads to the tip, smashed feature windows, alcohol shortages and abusive neighbours. Group meetings meant beers, homemade cookies (someone always forgetting another’s allergies), computers out, a few laughs and down to work. Agendas, admin, proposals, programming. There were legendary friends who would jump in behind the bar at a moment’s notice, and the young lawyer from around the corner who discovered a new place to hang out and meet people and never missed another opening.

We bonded over these things, and they were also the things that made the space. Although the place itself was important—slightly off-kilter corner entrance to a heritage building, hidden bookshelves, awkwardly placed bar, uneven floorboards and a familiar musty smell – it was beyond physical. In that sense it seems absurd to farewell it—we are all still here, albeit labouring on other projects. The passion that flowed into Archive_ has been redirected into other organisations, which form part of a greater arts and community ecosystem.

Artist-run initiatives are scenes, and we recognised a scene building around us. Scenes are ecologies and processes of social circulation. It’s about creating a particular social experience through seeing and being seen by others. In an editorial to a 2015 special edition of the journal Cultural Studies on ‘Scene Thinking’, ‘the scene’ is introduced as one marking the geographies of social experiences.[2] Here, the conception of ‘scene’ is one discussed in relation to a desire for understanding live music cultures. In these cultures, ‘a bar or club was as important as a record label, and audience members were as important as musicians, for they all made the scene together.’[3] The same could be said for Archive_: the directors, the artists, the writers, and the audiences all made the scene together. The gallery no longer stands; the scene no longer has a physical space to meet and evolve. Yet it is not dead. A scene, like an ecology, rarely just ceases to exist. Rather, it disperses and transforms.

Most of what is physically left of Archive_ currently rests above a past director as she sleeps. A couple of tubs with tools, hanging equipment and a ladder, hauled up into an attic in the midst of the pack down. The rest of the materials—many of which had been generously gifted to us by more established spaces – were dispersed to other artist-run initiatives, released back into the ecosystem.

Archive_ was always an organisation that looked towards the future. Fundamental to its mission was the maintenance of a digital archive that documented all 58 exhibitions, each accompanied with an essay—an invitation to dialogue. This archive also documents each of the special projects undertaken by the gallery and all of the personalities that had a hand in crafting the scene. The way we write and speak about that scene is what keeps it alive. The online archive of Archive_, then, is a form of inbuilt longevity.

Ultimately, Archive_ is now a resource and a document of a scene. What role this plays is not known, but we can be assured that you have access to it.

We do not mourn Archive_, because discussing it keeps it alive.

There will be no visitation, no service and no burial.

In lieu of flowers, please make a contribution to your local artist-run initiative. 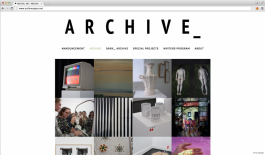 Archive_ was an artist-run initiative based in Newtown, Sydney from April 2013 – September 2015. It aimed to record emerging and experimental artistic and curatorial practices, with an emphasis on providing an accessible space, both physical and digital, for ideas, exchange and collaboration. It showed the work of over 100 artists across 58 exhibitions, with corresponding written responses by 35 emerging writers and curators. Directors included Lauren Carroll-Harris, Jack Condon, Daniel Connell, Patrick Cremin, Rebecca Gallo, David Greenhalgh, Sarah Kukathas, Luke Letourneau, Katriona MacLaughlin, Lisa Sammut and Jack Stahel.

[1] Official statement can be viewed at http://www.archivespace.net/untitled-custom-page

Rebecca Gallo is an artist and art writer based in Sydney. She examines systems of value pertaining to both objects and labour through a practice that encompasses sculpture, installation, video, performance and publishing. In her material practice, Gallo works with obsolete objects, transforming the disowned and discarded into assemblages, totems and carefully catalogued collections. Since 2015 she has been collaborating with Connie Anthes on Make or Break, a live art project that explores the role and visibility of artist labour, audiences and collectors in the production of art works and art market value.  In 2014-15 Gallo was a co-­director of Archive Space, an artist run initiative that operated with the aim of documenting emerging Sydney practices, and was the editor of RAVEN Contemporary, an online platform for contemporary art. Gallo holds a BFA from the National Art School (2006) and a Master of Art from UNSW Art & Design (2015).

Luke Letourneau is a writer and curator working in Sydney. He has curated exhibitions at Gaffa Gallery, UNSW Galleries, Firstdraft, Seventh Gallery, ARCHIVE_, 107 Projects and Kudos Gallery. In 2015 he curated an exhibition at Seventh Gallery, Melbourne, as part of the Emerging Curator Program supported by the Yarra City Council. In 2015 he became the inaugural recipient of the Freedman Foundation Curatorial Scholarship under the UNSW Art & Design Master of Curating and Cultural Leadership program. Luke has contributed to publications including Runway, Un Magazine and Art Almanac, he was a regular exhibition reviewer for Fbi Radio’s ‘The Hanging’, and has written catalogue essays for exhibitions in artist-­run spaces throughout Australia. From 2014-15 he was a gallery coordinator of the artist-run initiative ARCHIVE_.

Luke is the director of Kudos Gallery at the University of New South Wales.