This year marks the fifth iteration of Skulptur Projekte Münster, which debuted in 1977 and has since taken place in Münster every ten years. Bringing together the work of 35 artists and artist ensembles in 2017, this commentary on sculpture has become a somewhat curious document—or archive—of accessible public art spanning five decades, and continues to attract an inquisitive international audience.

As we continue to examine the kind of language we use to engage with ideas surrounding sculpture, or to most honestly convey our experience of a particular work, our observations on sculpture are in perpetual flux. The umbrella term ‘sculpture’ has over the decades bent and elongated to include the use of digital media and performance as sculpture. The spectrum of works plotted throughout Münster naturally kindle many discourses and lines of enquiry, too many to discuss in earnest here. Instead, I will group pieces together using criteria such as theme, medium, and durational quality in an attempt to convey some of these ideas. 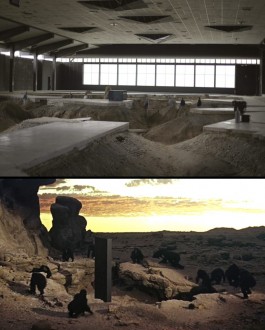 Pierre Huyghe has excavated the floor of a disused ice rink, to host his evolving environment After ALife Ahead. Cutting through concrete to unveil a stratum of clay, sand, and rock, Huyghe has dug into the ground to form a landscape of slopes and shallow ponds. Adding an element of chance to this controlled site of symbiosis, 4-sided inverted pyramid structures in the ceiling open at intervals, allowing rain and additional bacteria into a world of living structures, such as beehives hand-formed from clay. The work is designed to change and for these changes to be observed over time—the ceiling tiles growing mould over the course of the months, flies breeding and dying. Among this landscape, the black switchglass aquarium in the center of the rink reminded me of the black monolith from Kubrick’s 2001: a Space Odyssey. I doubt that Huyghe deliberately made this reference, however this contrived congregation of algae, GloFish, and human cancer cells is pretty out there.

Aram Bartholl’s work 5V is one of three he has included in the Skulptur Projekte. Bartholl has made a series of phone charger ports which are powered by thermoelectrics, using thermogenerators to convert heat from fire into electricity. It’s a comment on our current obsession with and dependence on the internet, and the primal relationship we have with our phones.  The apocalyptic image of desperately roasting malnourished rats on spits has become one of charging smartphones with flames—our meme appetite perpetually feeding while the body atrophies. 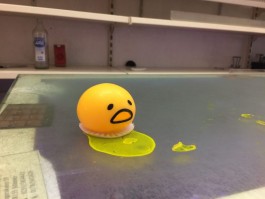 Mika Rottenberg’s video is housed in an Asian mixed business store which has long since closed down. Cosmic Generator (working title) is a video installation buried within a found stage of readymades. The configuration of the store and distribution of these readymades produces a site-specific, time-stamped feeling, in an eerily abandoned space loaded with texture. Rottenberg draws our attention to the readymades, creating a world filled with countless bromidic compositions in the relationships between these curious objects and novelty items left in-situ. Information visually obtained from the installation is echoed in the theme of her film where we see mass produced plastic industries endured predominately by female workers—with the addition of a movie-magic tunnel based on the rumour of a tunnel in Mexico, Rottenberg creates an immersive politically-tinted intermedia commentary.

Held inside the LBS bank, with its futuristic engineering, Hito Steyerl has also successfully developed a whole world with her interdisiplinary work HellYeahWeFuckDie. The title of this work is based on Billboard magazine’s finding that these are the five most frequently used English words in chart-topping songs over the last decade. The words are realised again in the bank’s foyer, both as concrete clad lightbox texts and as graphics in her multi-channel video installation.  The footage is a mix of laboratory tape of mechatronic engineers testing robots, and computer generated animations of biped robot walk cycles, set to an aggressive upbeat techno soundtrack.  In the adjacent space a documentary film looks at the part that technology has played in war. Set the Kurdish city of Diyarbakir, much of which has been destroyed, the film looks at the work of inventor Al-Jazarī who worked there in 1205. Steyerl compares early ideas in engineering to the automated killing machines of today, and the robots sent to provide aid in war seem included almost as a circuitous afterthought. 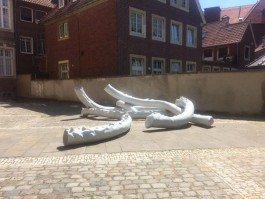 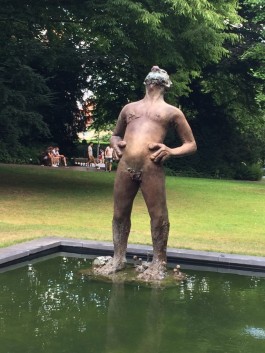 heavy metal but ready to dissolve

Nairy Baghramian’s work Beliebte Stellen/Privileged Points is particularly interesting because of it’s location in the courtyards of the Erbdrostenhof, a baroque palace built in 1757 where Skulptur Projekte works by Richard Serra (1987) and Andreas Siekmann (2007) have also stood. The pile of six white, primed bronze segments at the rear of the building especially caught my eye; enough pieces to construct two more Privileged Points, from objects appearing almost alien in their anatomy. Baghramian has made the unknown future of the sculpture known to the public, cast in bronze yet mutable.

Elsewhere on Münster’s Promenade, Nicole Eisenman’s plaster and bronze figures in Sketch for a Fountain exude water, but not in the ways we have come to expect a figurative fountain would. A slow ebb flows from the top of a super-sized beer can, a trickle streams from nondescript points in the lower leg of a towering genderfluid figure. Her loose, almost inebriated, renderings of the human anatomy appear both solid and whimsical in the same glance, creating a greater depth of feeling than I would have thought possible in bronze. The swollen obtuse hands and feet are almost sketched in bronze, as the title would offer, suggesting a childlike quality in a medium which has historically been reserved for traditional sculpture, longevity and permanence. The mixture of plaster figures among the bronze gives the work a sure fault-line to deterioration. (in fact, it was reported this week that one has already lost a head -Ed). 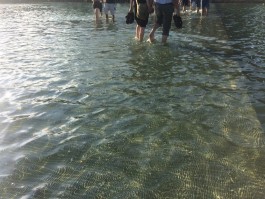 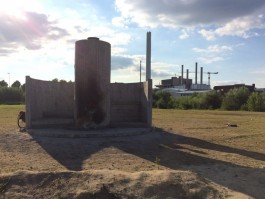 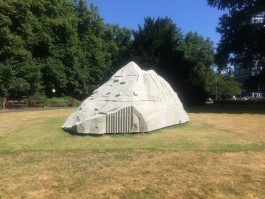 In the 2017 Skulptur Projekte catalogue a text message dialogue between Ayşe Erkmen and Suchan Kinoshita continues over several pages. In this chat Erkmen discusses the ideas behind her underwater bridge, On Water. After learning to swim by being thrown into deep water at the age of 4, she states ‘my trauma became my fascination’. Near the end point of Münster’s inland harbour, between its Northern and Southern piers, Erkmen has constructed a passage just below the surface of the water, providing a scaffold for the ultimate biblical illusion of walking on water, without a second thought. ‘Walking over a dead end instead of walking towards it’, Kinoshita offers. Perhaps Erkmen is confronting her fears by creating a structure she can trust inside an element which she cannot.

Oscar Tuazon’s work can be both radiant and cold, a cylindrical double chambered fireplace made from concrete. An object whose narrative depends on its active use: how do people engage with this minimalist object with functional uses? Burn the Formwork cuts a new silhouette into the industrial view from the canal in the dying light. It is a functional fireplace, a site for social interaction. This interactive sculpture made me think of Thomas Shütte’s work Nuclear Temple, a piece you are permitted to enter using your brain only.

Back on the Promenade, Justin Matherly has created a true-to-scale model of Nietzsche’s Rock, which Nietzsche himself observed in his notes while writing Thus Spoke Zarathustra: A Book for All and None. Matherly’s facsimile, based on a series of reference photographs of the actual rock on the edge of Lake Silvaplana in Switzerland, appears fractured and weightless despite its volume. Its fault lines are clearly on display, an artefact of the production process and a recurring aesthetic of Matherly’s signature style. The rock seems to float ever so slightly rather than digging a groove in the earth as one would expect, a result of the constellation of mobility aids used as its foundation; an incongruent yet philosophical choice under the weight of the concrete and fibreglass form. 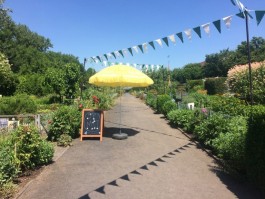 Jeremy Deller’s project Speak to the Earth and It Will Tell You (2007-2017), located in one of Münster’s allotment gardens, is presented as a collection of uniformly bound journals which have been tended to by locals along with their gardens for the past decade. In these scrapbooks the gardeners have outlined years of activity, or at times inactivity– it’s interesting how the empty pages also map the passing of time. During my visit I discovered Hermann Hesse poems in a number of tomes, alongside photos of celebrated harvests and bicycles trapped under snow. In this intimate work, Deller explores the notion of community and how things grow and decay over time.

Perhaps to a greater extent Michael Asher’s Double Check, which is a retrospective of writings and artefacts from his previous work Installation Münster (caravan), documents a variety of physical and social changes in the city of Münster.Asher installed the same model of Eriba Familia caravan decade after decade from 1977—2007, at the same appointed sites, until some were no longer accessible, or too bureaucratic to access or the landscape changed. As time went by the caravan model came to be considered vintage, and due to its consistent resurfacing, it became a motif for advertising the Skulptur Projekte.

The purported 24/7 availability of everyone and everything has the effect of shrinking time. In view of this development, it has become ever more important to maintain a certain independence…[1]

…from the world of fast noodles where art is merely a commodity with a resale value—and capitalism never sleeps. Thanks to the persistence of founding director Kasper König, who has been thoroughly involved in all five Skulptur Projektes, its ten-year format will continue (despite pressure to have the cycle halved). The generous duration set aside for artistic processes to gestate, doubleback and reinvestigate—sans frantic panic under time-pressure duress—allows for the production of site-specific works of a high standard. These works harbour instinctual sensitivities towards the space—the years in between providing a vantage point for informed political critiques—all within the context of a now renowned sculpture event which put Münster on the international art map.

Patch Sinclair is an intermedia artist living in Sydney.

Patch Sinclair is an intermedia artist living in Sydney.